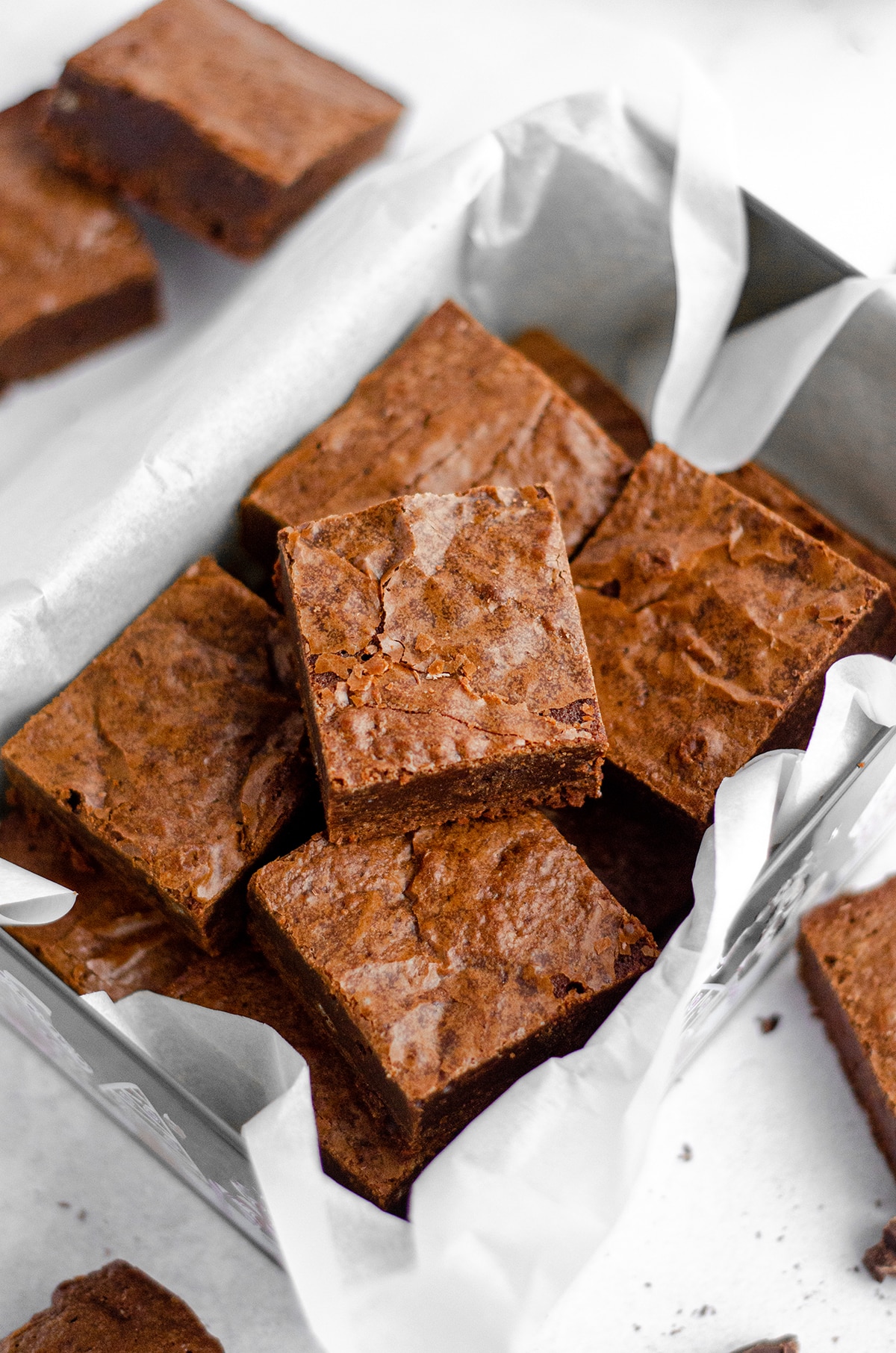 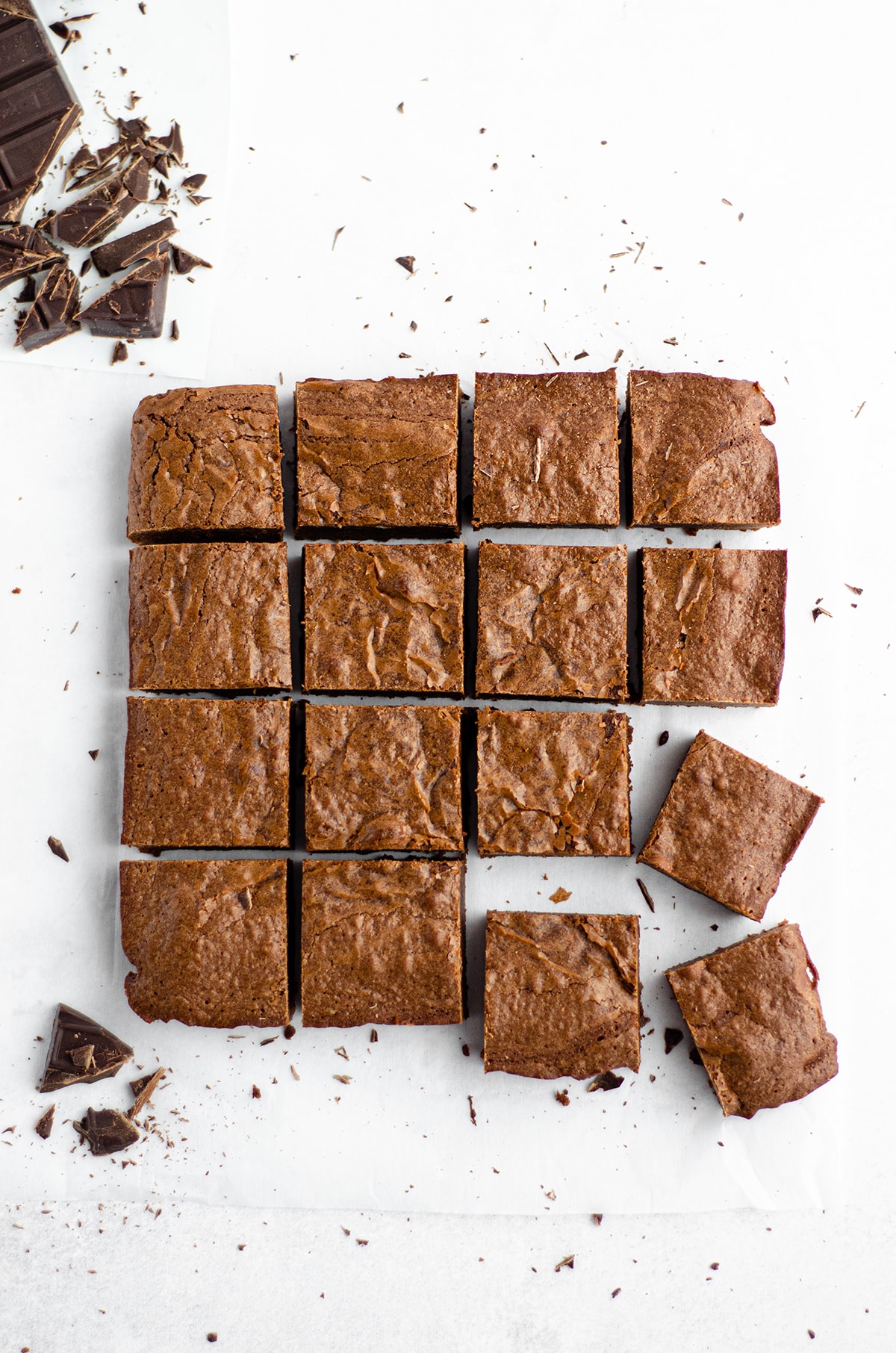 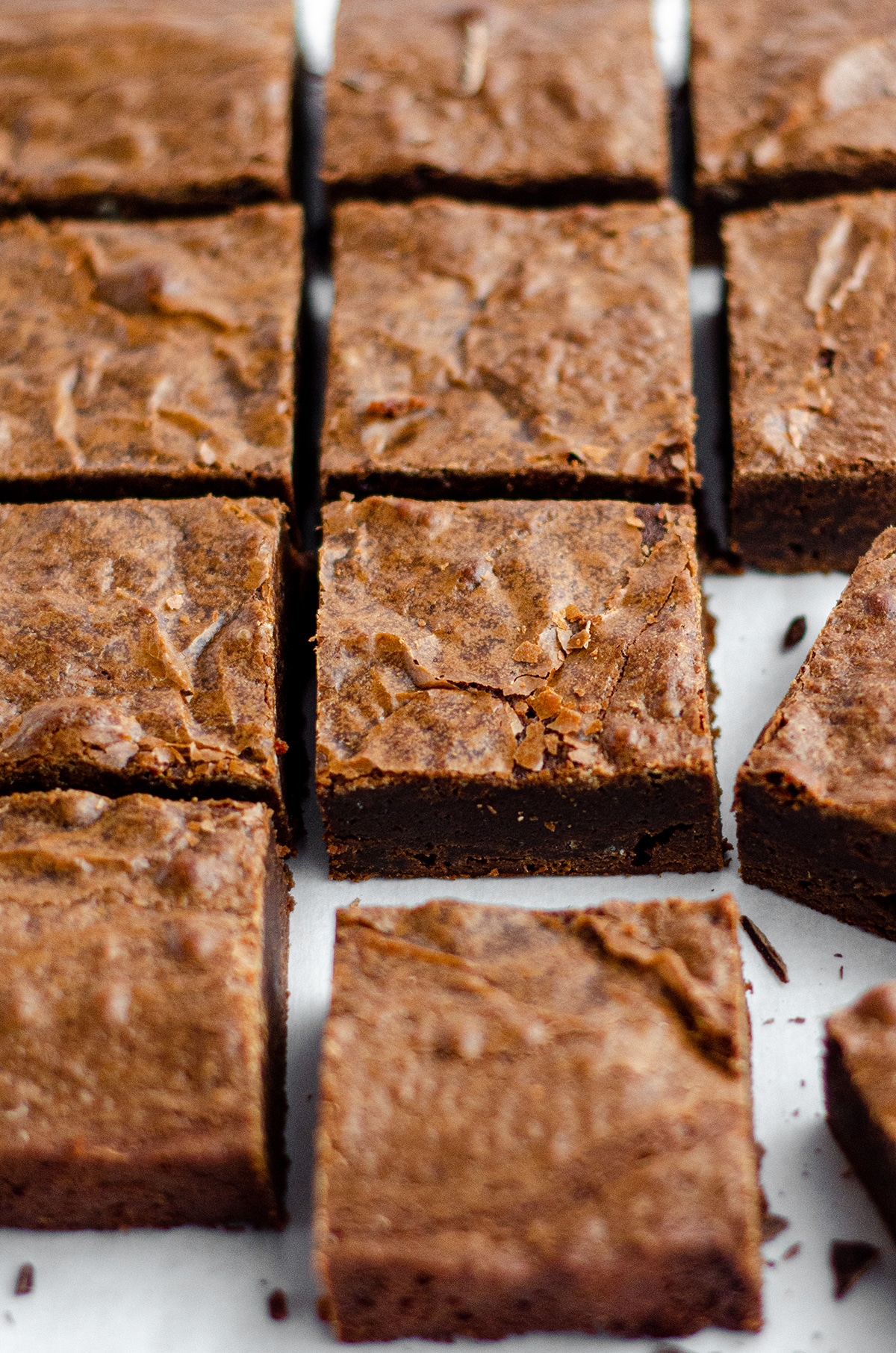 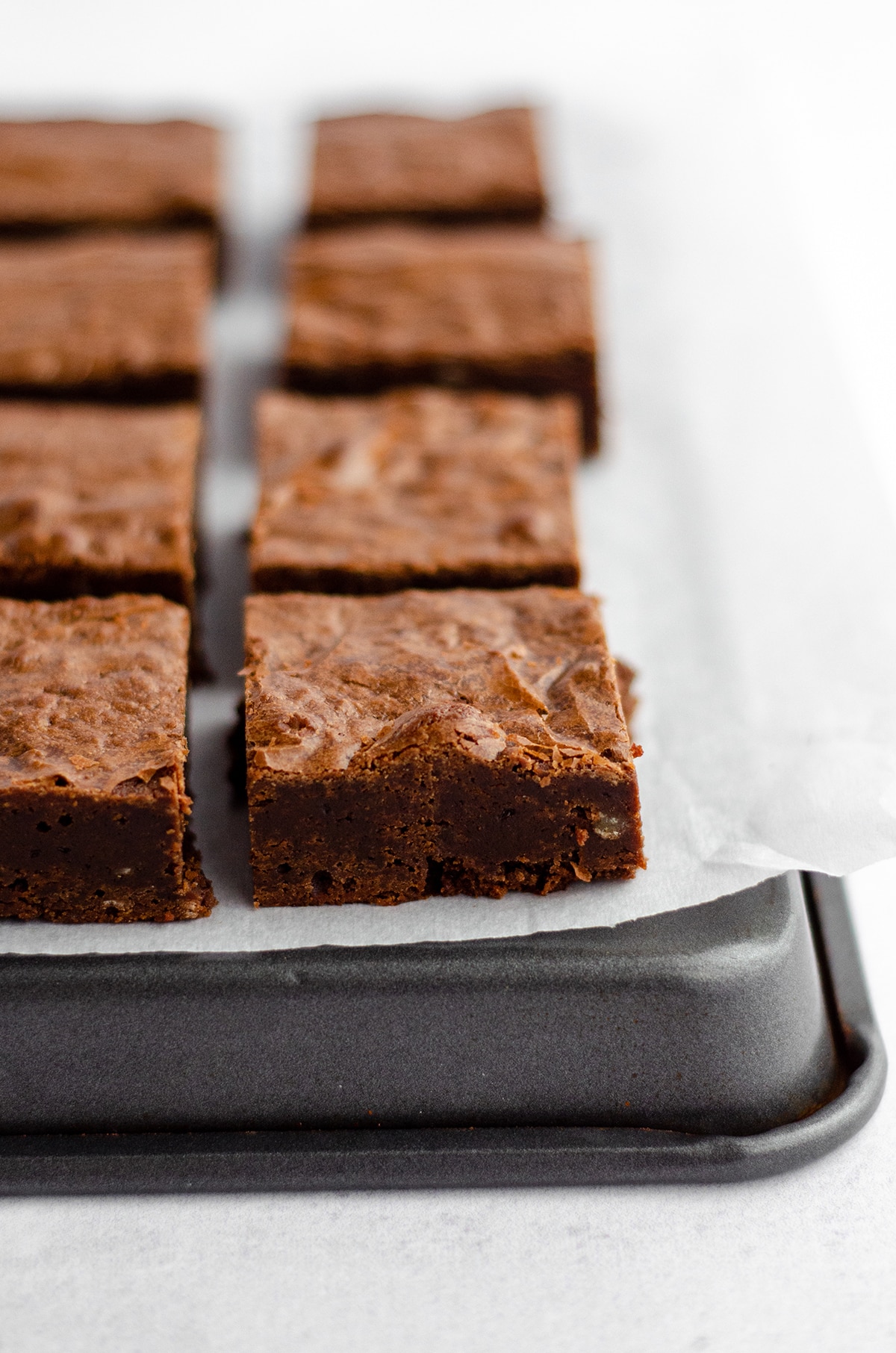 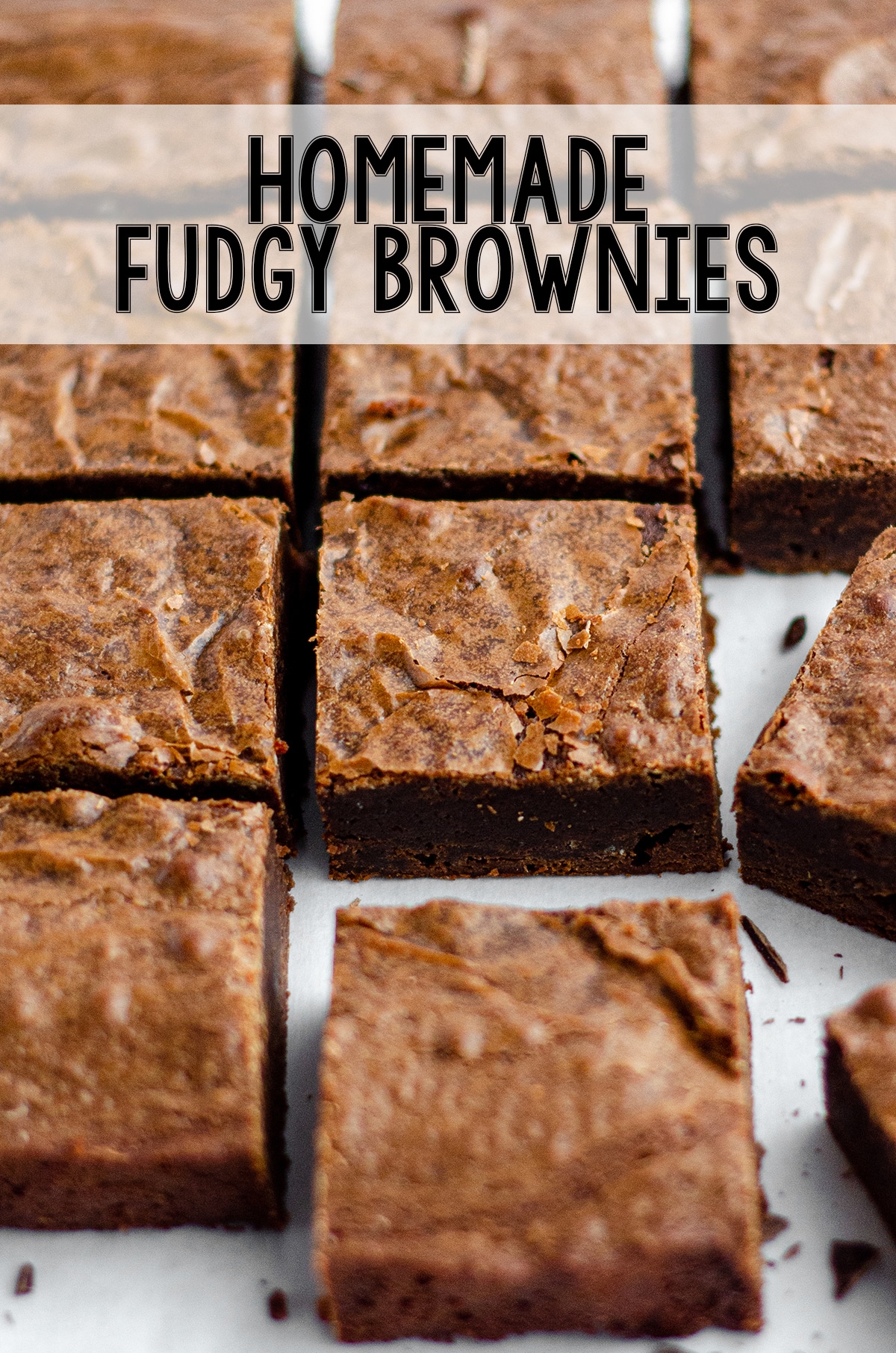 In the past, I’ve done cakes, muffins, and breads. It’s time we got some regularly-scheduled chocolate all up in this place, and I do believe brownies is the way to do that right.

I present to you the pilot of my Brownie of The Month series, homemade fudgy brownies.

It’s unbelievable that I’ve been blogging for nearly 6 years and have yet to share a regular brownie recipe with you.

And you want to know something crazy cool about all those brownie recipes? They all start with the same base. The base you’ll find here today.

I’m also here to shout from the rooftops that scratch brownies are my only way. Like, ONLY ONLY WAY.

And I will never stop telling everyone I meet who doesn’t agree that scratch brownies are so much easier than you think they are and they really are so super delicious.

Some years ago, actually in the post for my Peppermint Pattie brownies, I suggested that I get something about “scratch brownies are better” engraved in my headstone, and I’m sticking by that one.

I think it has a nice ring to it.

So today I want to talk to you all about the whats and whys of my dense, chewy, fudgy homemade brownies and why I chose the ingredients I chose when I first laid the groundwork for this recipe.

To start fudgy brownies off on the right fudgy foot, you’re going to make your base from chopped chocolate and butter. We won’t be using any cocoa powder in these brownies, because cocoa powder is a dry ingredient, which brings lift and “cakey”ness to baked goods.

Similar to chocolate fudge frosting, which we like to keep dense and, well, fudgy, we don’t use any cocoa powder. That base is purely chocolate and butter, like these brownies.

If you want to go with a lighter texture, like what you might want to spread on a yellow layer cake, add chocolate flavor to your buttercream with cocoa powder (Dutch processed is my fav!).

My homemade brownies use a whole cup of sugar, but ¾ of that is brown sugar, and the remaining ¼ cup is white sugar. While all of the sugar could, in theory, be one or the other, I like to use a combo.

The brown sugar brings all the moisture and deep, bold sweetness and the white sugar insures there is a sharp sweetness going on with all that semi-sweet bar chocolate.

Sugar is also, believe it or not, another way to bring “lift” to baked goods. Since brown sugar is heavier and wetter than granulated sugar, we insure we’re not giving our brownies too much reason to go anywhere cakey.

Eggs are a funny little thing. When used properly, they can totally lift up baked goods. Take my red velvet cupcakes, for example. We whip egg whites into that batter to incorporate air and keep the cupcakes fluffy.

But when we add three whole eggs to these brownies, and we don’t whip them in (because we’re doing this all by hand without a mixer), they bring the dense texture we love in our fudgy brownies.

They also bring lots of fat, which means lots of nooks and crannies for all the flavor and something that’s vital to the structure of a brownie.

JUST A TOUCH OF FLOUR HOLDS IT ALL TOGETHER

We’ll only use ¾ cup of flour in these brownies– just enough to give them some support. Without the flour, we’d likely have some sort of gooey pile of fudge. And while that’s all well and good, it’s not what we want today.

More flour than just that ¾ cup and we’d be on our way to cakey brownies. We hit the sweet spot here with these fudgy brownies!

Just a touch of vanilla extract and salt bring all the flavors together for the perfect super-chocolate profile.

People, these are hands down my absolute favorite brownies. Ever.

Yeah, they take a little more hands-on time than a box mix, but to me, it’s always worth the extra (minimal) work. I get rave reviews on brownies wherever I go. And they all have this base.

In fact, a few weeks ago, I took some of my chocolate chip cheesecake swirl brownies to a party and someone said “I’ve never had brownies that taste better as you chew them.”

I MEAN. If that isn’t the best compliment?!

So, please… Give these seriously fudgy scratch brownies a try. I know you won’t be disappointed, and I know I have a pretty good chance of making you want “SCRATCH BROWNIES ARE BETTER” on your headstone too.

Too much? Maybe. But maybe not, either.

Stay tuned for 11 more brownie recipes in 2020! If you can master this one, you’ll be all set for the rest to come! 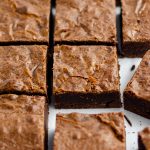 *Room temperature eggs: these incorporate into batter much more easily than cold eggs, although this is not absolutely necessary.
Did you make this recipe?Mention @freshaprilflours on Instagram or tag #freshaprilflours!
Pin
Share
Email
Share
Tweet

Absolutely amazing! A million times better than the boxed ones. Thanks!

Thanks so much, Lori! That means a lot 🙂

As someone who was hugely loyal to box brownies, I can say I am now fully converted. These are so freakin good and so easy to make. Have made for others many times and always get compliments on how fudgy and delicious they are! I will admit for the sake of others reading this review that even though I know it is criminal, I’ve used regular semi sweet chocolate chips in a pinch instead of chopped chocolate and it turns out pretty delicious too 🙂

I love so much about this, Katie! Thanks for sharing!