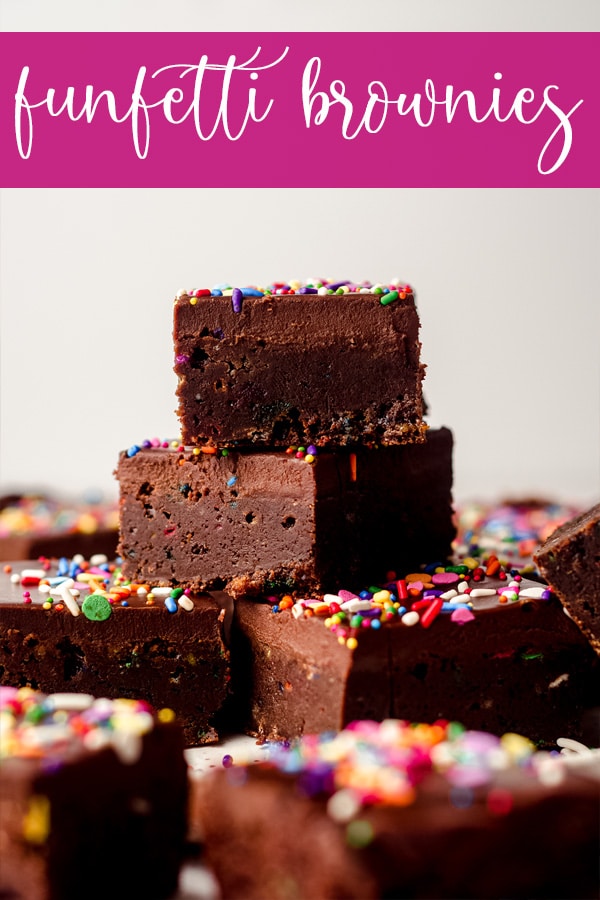 Simple from-scratch brownies filled with sprinkles and topped with a smooth and creamy chocolate ganache.

Are you into celebrating birthdays for inanimate objects/things that aren’t humans/animals? Because I’m here to tell you that I AM and this week is a big one!

April 13th is the official birthday of my blog, when I hit “publish” for the first time and had zero expectations of what was to come.

It’s been a year and a half since I first called this blog my full time job (a year and a half to the day, in fact!), and I know it’s so cliche to say it, but I could have never pictured myself doing this when I started it seven years ago.

This week, at least in this corner of the internet, is all about the sprinkles and celebrations. I spruced up and improved four of my beloved funfetti recipes (funfetti donuts, funfetti oatmeal cookies, cake batter dip, and funfetti sugar cookie cake), and today’s homemade funfetti brownies are brand new!

If you were around for any of 2020, you know that I have a beloved go-to homemade fudgy brownies recipe that is the base for literally all of my brownie recipes.

I published 12 new brownie recipes on my blog last year in my Brownie of The Month series, and saved this one specifically for my 7th blogiversary.

But here’s the thing– I’ve got some beef with the funfetti brownie selection I saw when I typed those two words into Google several months ago.

None of these funfetti brownies were actually funfetti chocolate brownies. Everything I saw was technically a blondie, and that’s not what I think of when I think of funfetti cake batter brownies.

Here’s a blondie. And here’s another blondie! A brownie is a brownie. It’s as simple as that.

HOW TO MAKE FUNFETTI BROWNIES

If you’re interested in the whys and hows of all of the ingredients, I suggest popping over to that post to get the details. I talk extensively about exactly why I chose and use the ingredients that I do and the end result I strived for.

These funfetti brownies are no different, but they do include one ingredient I use in all of my funfetti or cake batter recipes, and that’s almond extract.

Of course, if you have any aversion or allergy to nuts, you can 100% leave it out. It just gives that signature essence of “cake batter” flavor and makes these brownies a touch different from the rest.

Sprinkles go in the batter as well, because duh. Funfetti = sprinkles and there is no other way to do a celebration, are you with me??

When I wrote this recipe for funfetti brownies, I wanted them to be a little different than just brownies with sprinkles, so I took a note from a gal named Little Debbie.

And if you’ve never made homemade chocolate ganache, I’m here to tell you it’s so simple, you’ll be going “what? That’s it?”

Of course, there is nothing wrong with this method, but we can make chocolate ganache even more simply by using chocolate chips. SCORE!

You’ll need a cup of chocolate chips and little bit of heavy cream. Warm the cream, pour it over the chips, allow it to sit for a couple minutes, then stir it (with patience– it takes a bit!) until you create this incredibly smooth chocolate mixture.

You’ll be able to drip it back into itself at first, but as you let the ganache cool, it thickens, which allows us to use it as a perfect topping for these rainbow brownies.

Because YES, the contrast of rainbow sprinkles against chocolate is just divine, isn’t it?!

Once you’ve topped your brownies with the chocolate ganache and additional sprinkles, you’ll need to chill the whole pan in the fridge to allow the ganache to firm up. It won’t harden, but it will become firm.

When at room temperature, the ganache will still stay set, but soften up nicely so that when you sink your teeth into one of these funfetti brownies, you’re met with incredible taste and heavenly texture.

Personally, I think these are a better choice than store bought cosmic brownies, but hey, that’s just me and my “scratch tastes better” philosophy. But you can totally be the judge!

As I’ve mentioned, I am so grateful to be able to do THIS *gestures to the air because that’s where the internet exists* as my job, and I am so happy to be able to bring you my beloved recipes regularly. And have you bake them!!

I can’t wait to see your homemade funfetti brownies pics and if you feel so inclined, stick a candle in one and celebrate someone or something turning some age.

Because every additional year we get is the opportunity for something amazing to happen, and you never know when something “fun” can turn into something incredible.

*Room temperature eggs: these incorporate into batter much more easily than cold eggs, although this is not absolutely necessary.   Adapted from homemade fudgy brownies
Did you make this recipe?Mention @freshaprilflours on Instagram or tag #freshaprilflours!
Pin
Share
Email
Share
Tweet

These are so good. Easy. Delicious. And fun! The slight hint of almond is what puts them over the top yummy. Plus who can resist an opportunity to use sprinkles, especially when you have little bakers helping you. (Plus I used a 1 for 1 gluten free flour and they were still perfect. Yeah!)

Thanks so much, Sara! I’m glad you liked them and thanks for the tip about the GF sub.