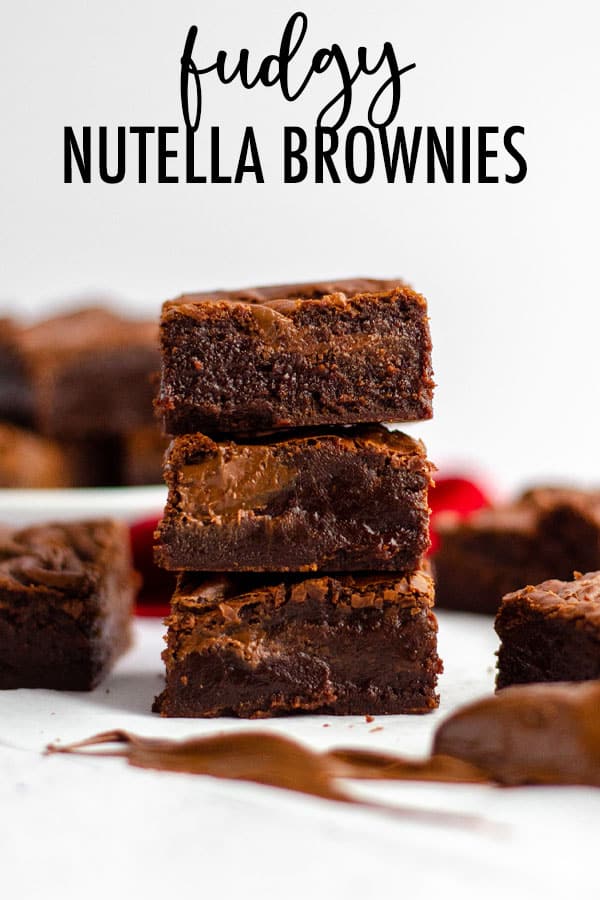 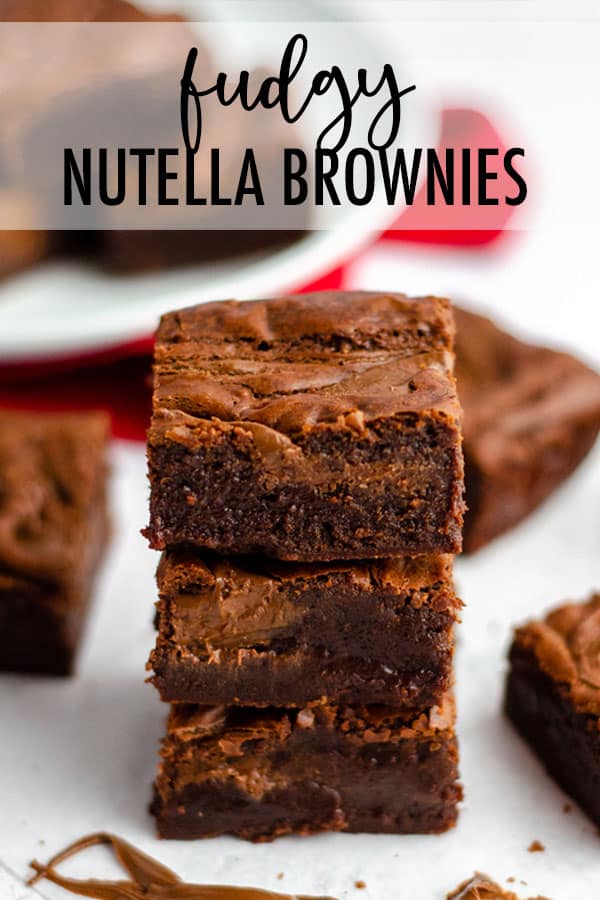 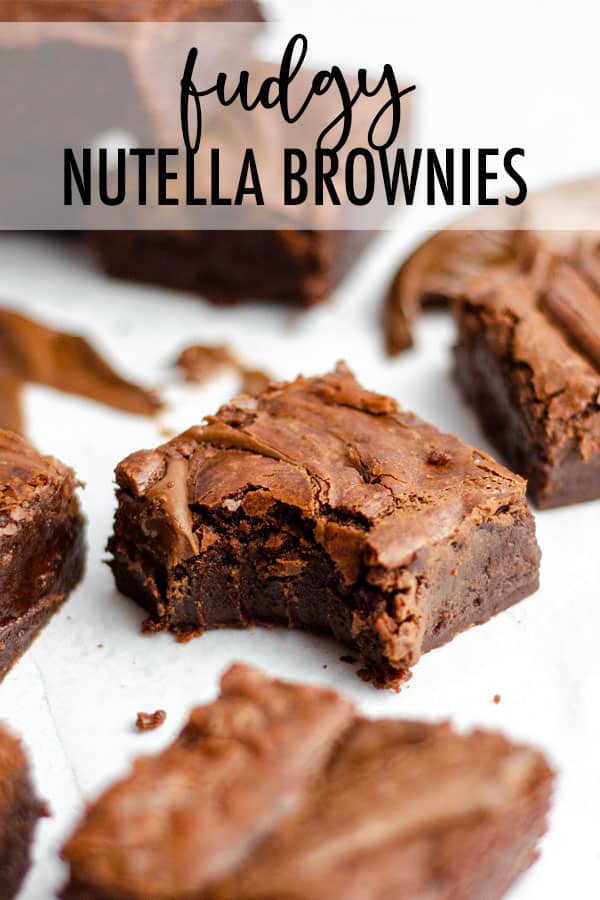 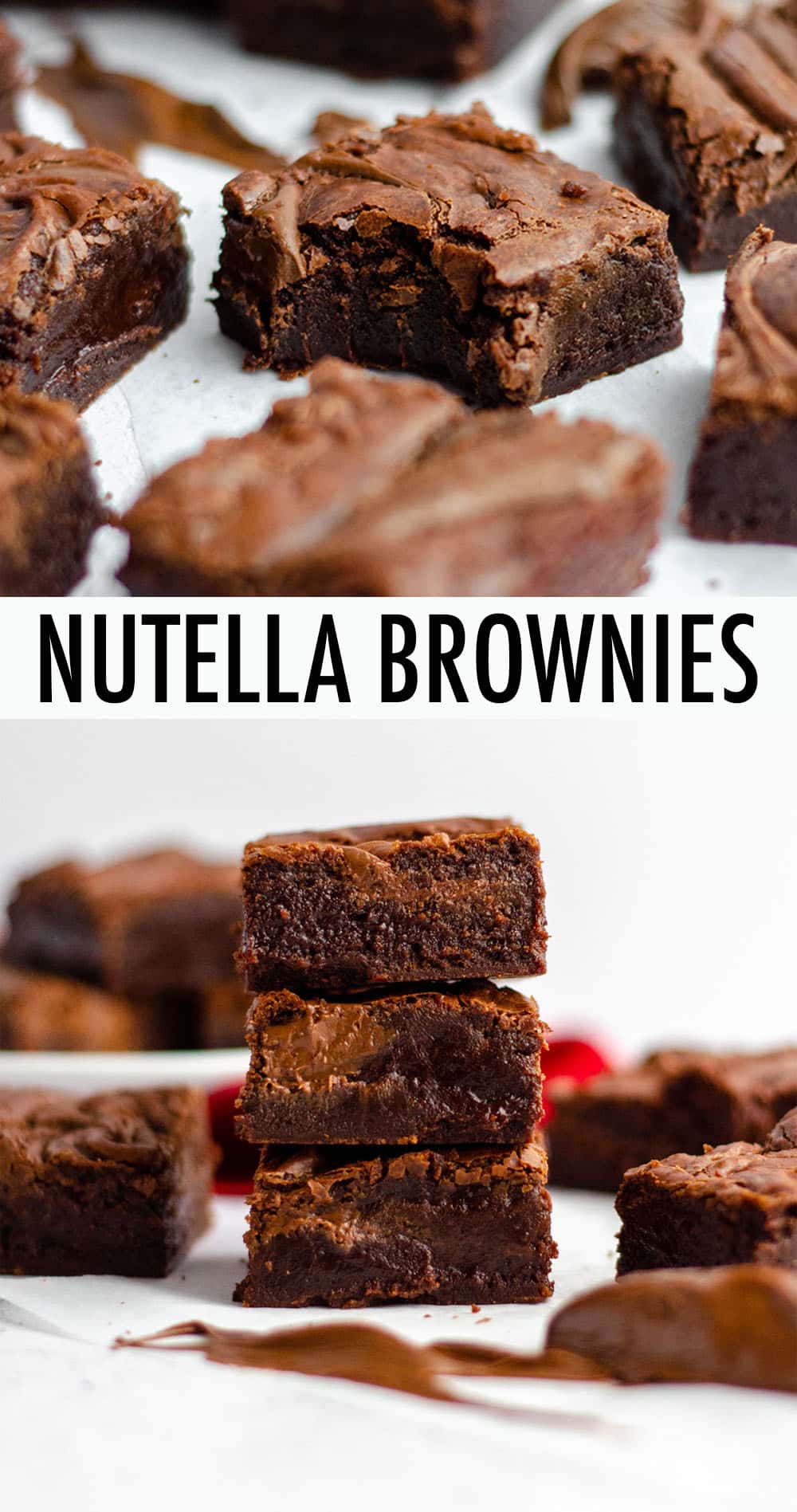 These seriously dense and fudgy Nutella brownies have Nutella blended right in the batter and swirled into the top. They are a chocolate lovers’ dream! 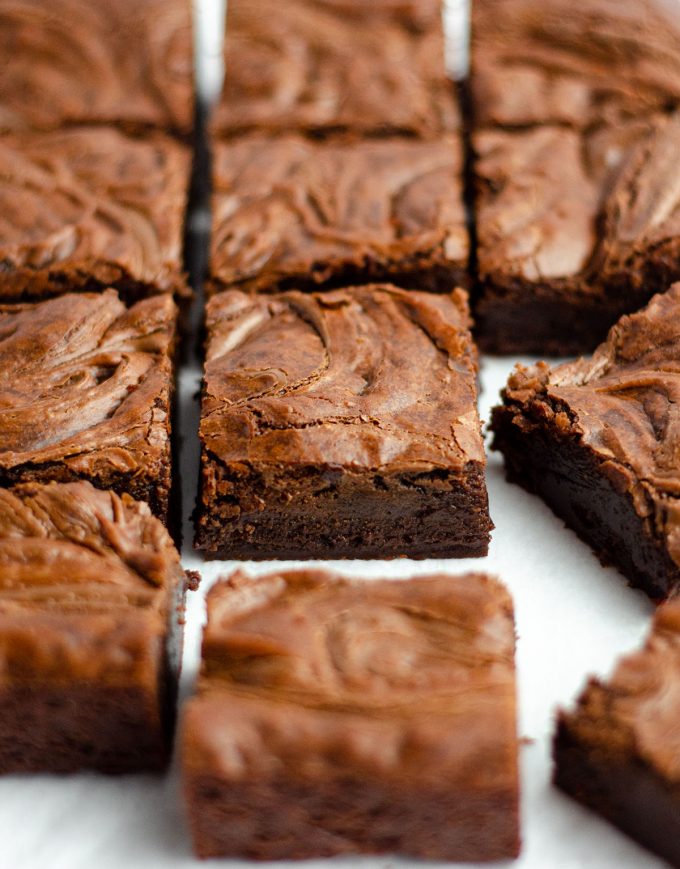 When life hands you Nutella, put it on everything.

GUYS. Nutella is out-of-this-world good. Do you agree or no?

We don’t normally have Nutella in our pantry or even in my collection of baking ingredients, so when I added it to the grocery list a few weeks ago, I made sure to write “big jar” on there in case I needed to retest the Nutella brownies recipe I had brewing in my head. 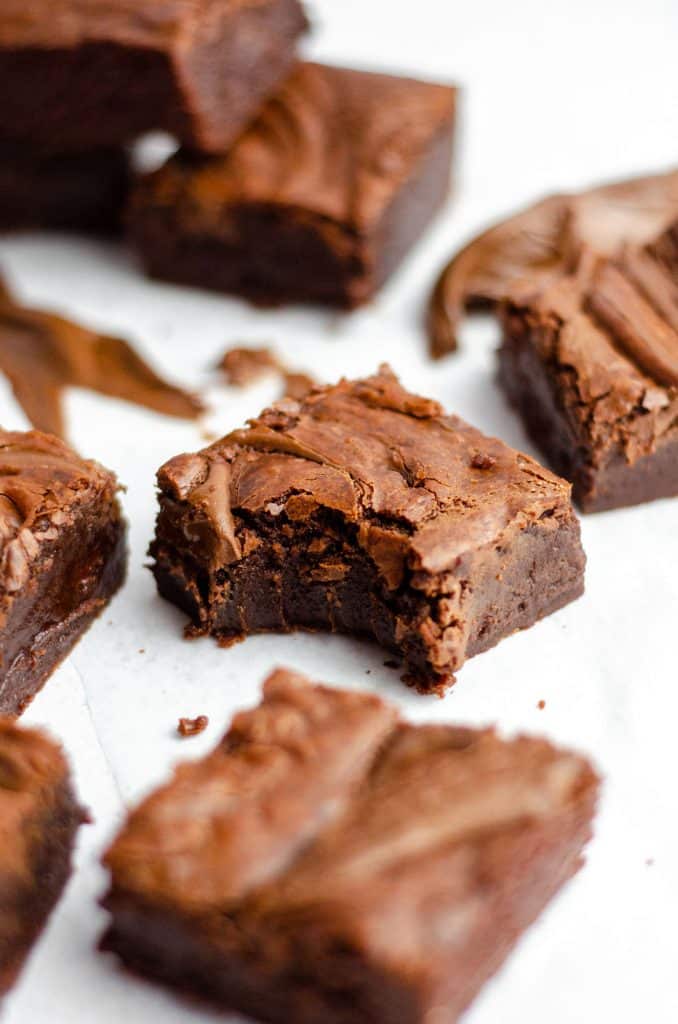 When the brownies turned out perfectly on the first try, I deemed the jar of Nutella “fair game” and it went on, umm, just about everything until there was no more.

YIKES. We finished the rest of that jar pretty quickly.

DANGEROUS, I tell you. Just like the brownies that hold its name in the title.

As all of the brownie recipes in my Brownie of The Month collection do, these fudgy Nutella brownies are, so far, most closely related to my basic homemade fudgy brownies. 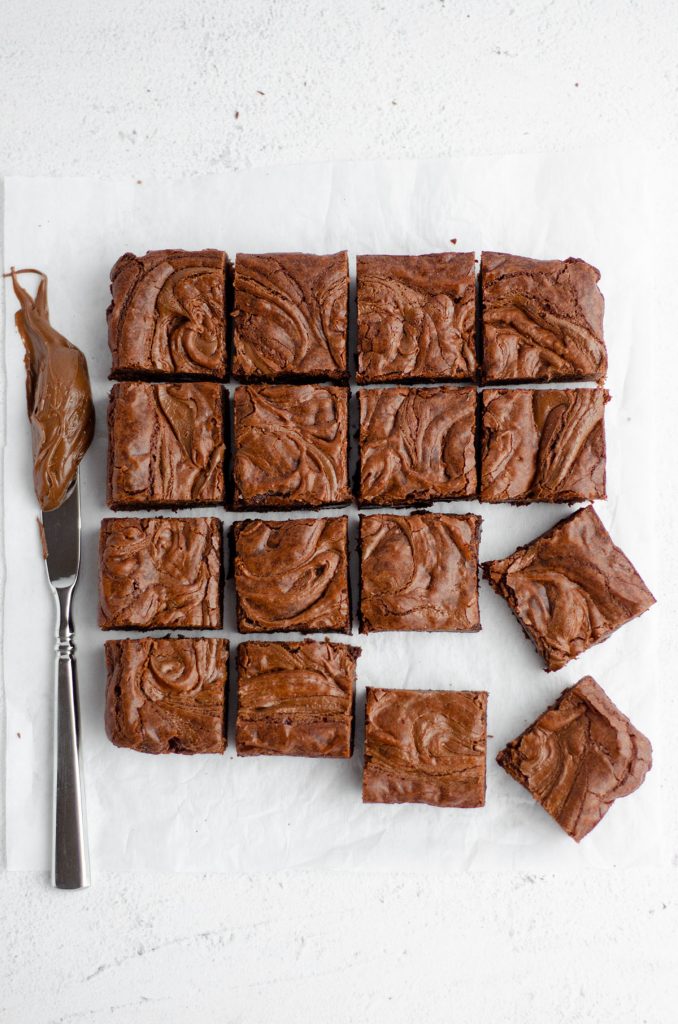 They really only require Nutella as an additional ingredient (as opposed to my mint chocolate brownies which have a whole additional mint buttercream step or my red velvet brownies that require an additional red velvet cupcake batter element), so their method is simple and the ingredient list is basic.

I played around with a few different Nutella scenarios when I planned this brownie recipe, and while I contemplated Nutella filled brownies, as in brownies with Nutella in the middle (like a Nutella sandwich!!), I thought that might require some additional Nutella prep (like making a frozen Nutella layer to place between batter layers).

The Nutella brownie recipe I settled on worked simply and perfectly, and I decided that it was genuinely awesome enough to call “the one.” 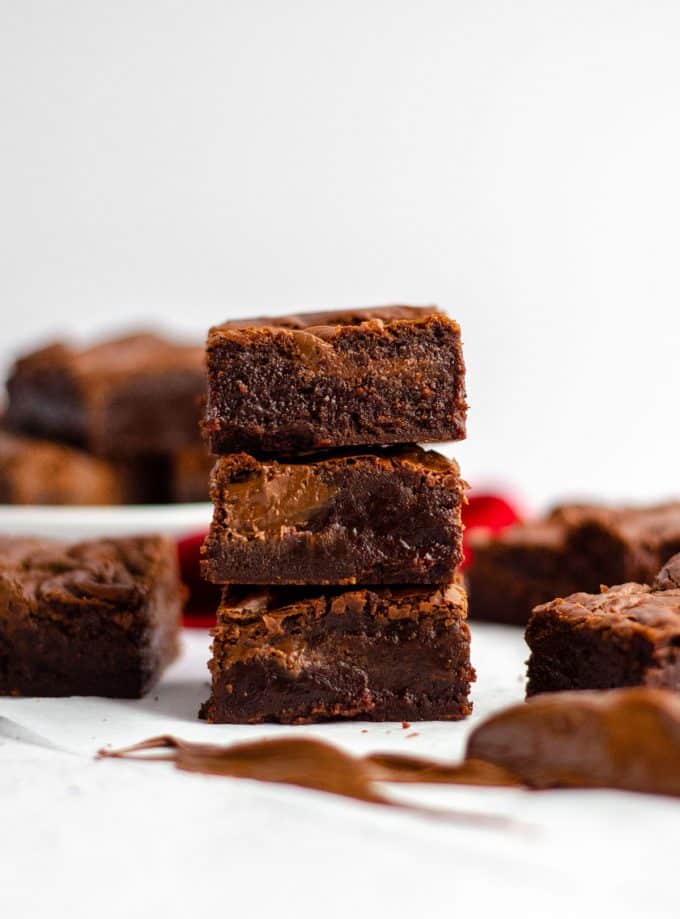 My basic brownie recipe begins with simply melting butter and chopped chocolate together and letting it cool before combining all of the remaining ingredients.

We’re still starting that way, but we’ll add 1 cup of Nutella straight to this mixture, which will help melt the Nutella enough to incorporate it into the batter and also help to cool the butter/chocolate.

Once the rest of the batter is ready to go, we’re pouring all of it into a baking pan, and then dolloping another 1/4 cup of Nutella on top of the batter before swirling it into the whole thing.

I turned my 1/4 cup of Nutella into 5 dollops: one in each corner and one in the middle. This made for perfectly spaced out swirls.

You swirl however you please, my friend. 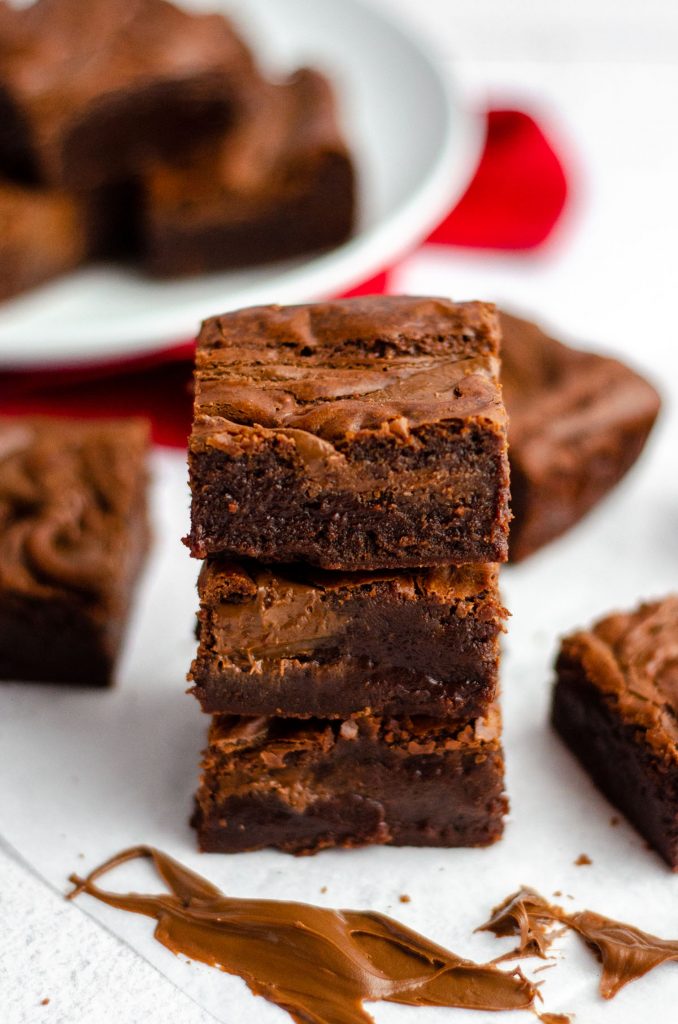 I was shocked at how seriously fudgy these brownies were. Like… I originally just called them “Nutella brownies” but decided they absolutely needed to be called “fudgy Nutella brownies” after one bite.

My youngest BIL, one of Matt’s coaches, and a friend who had a birthday all got to try them and the unanimous report was that they were supremely fudgy, amazingly delicious, and hard to stop eating. 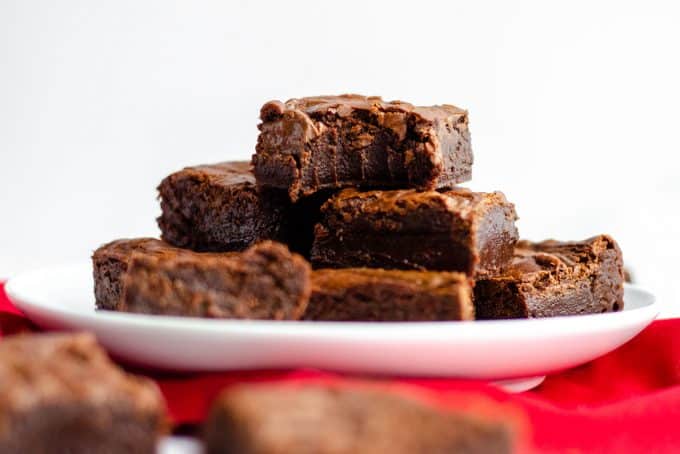 What I love about these Nutella brownies is their simplicity in method– adding the Nutella doesn’t require a whole lot of extra work and the result is a chocolatey brownie that is just bursting with Nutella goodness and chew that rivals the chewiness of my basic homemade fudgy brownies. 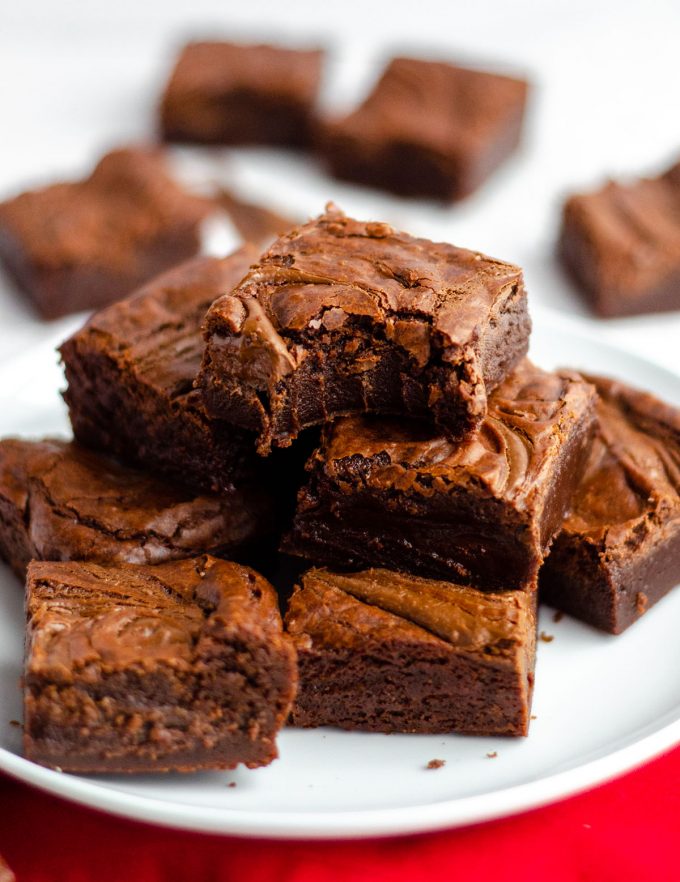 They are most definitely the favorite of my monthly brownie recipe collection so far, and I would even go so far as to say that if we find ourselves with Nutella on the grocery list again, I may have to whip up another batch just to “make sure the recipe is still awesome.”

Nutella lovers, this brownie is for you. And if you want to spread a little extra Nutella on top before you eat it, I won’t blame you one bit. 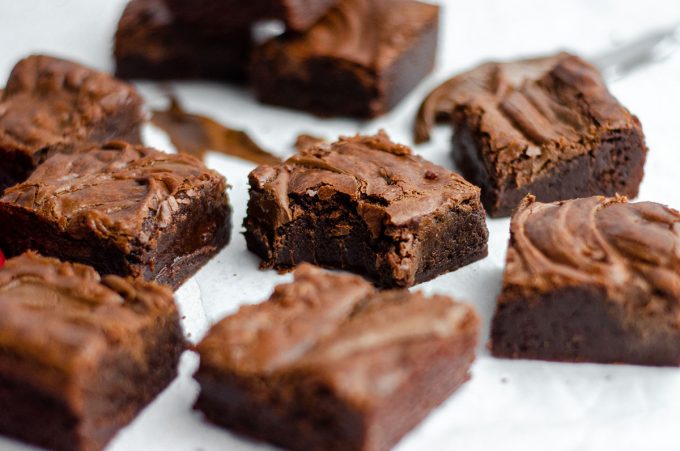 Just invite me over for one, too… Mmmkay?? 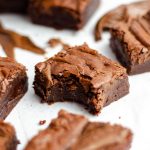 These seriously dense and fudgy Nutella brownies have Nutella blended right in the batter and swirled into the top. They are a chocolate lovers' dream!
Prep Time15 mins
Cook Time25 mins
Total Time40 mins
Servings: 16 brownies

*Room temperature eggs incorporate into batter much more easily than cold eggs, although this is not absolutely necessary.
Did you make this recipe?Mention @freshaprilflours on Instagram or tag #freshaprilflours!