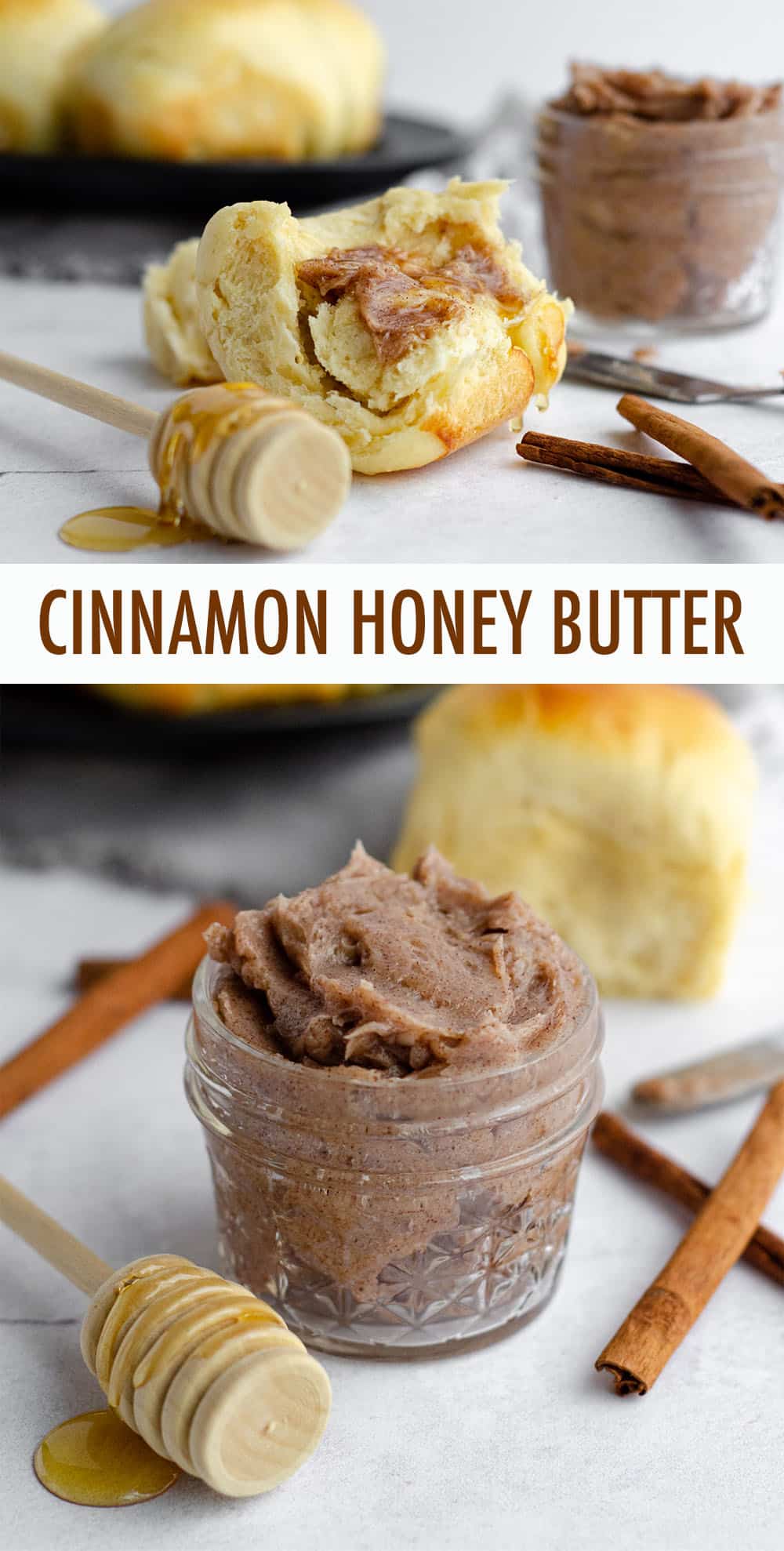 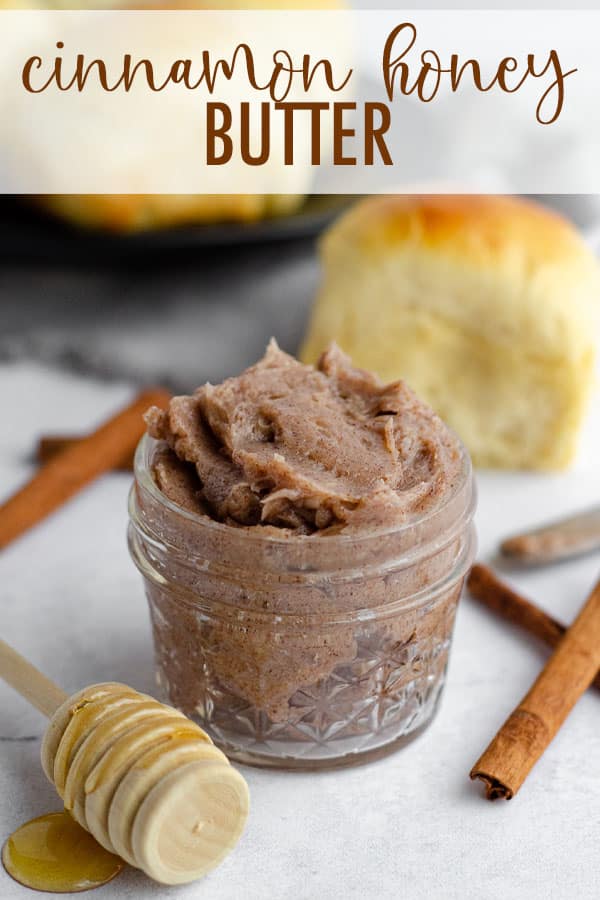 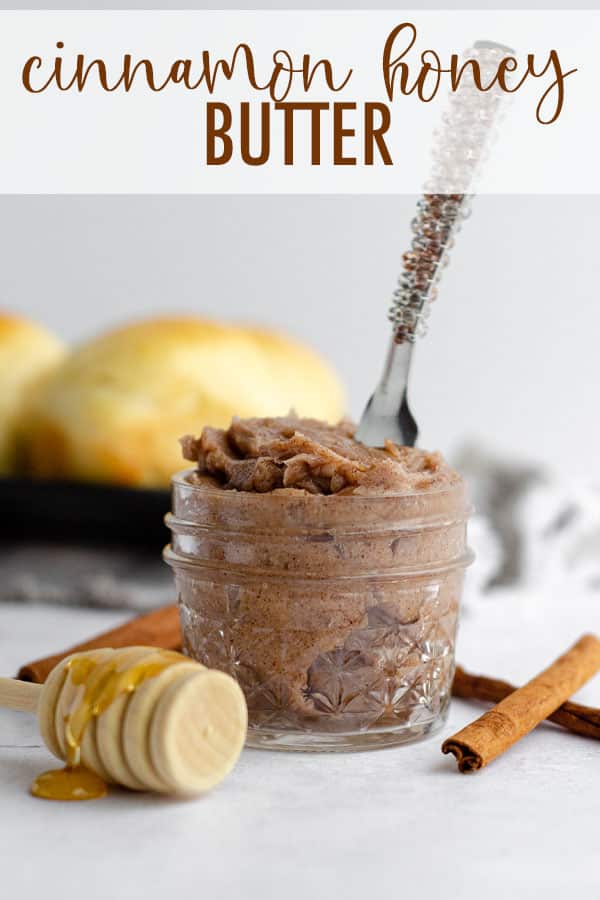 Making your own cinnamon honey butter is as simple as six ingredients. Perfect for topping yeast breads, sweet breads, and sweet potatoes, and could even be called a Texas Roadhouse copycat. 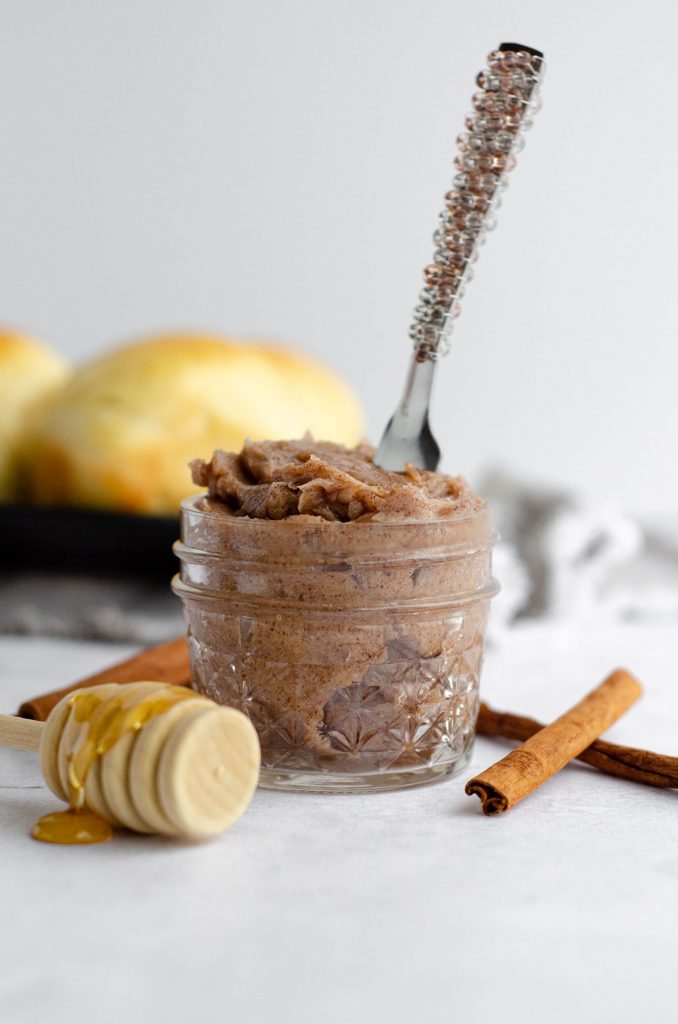 Dare I say… I think this month is actually flying by.

Given the circumstances of stay-at-home orders, I feel like I have no idea how it’s already 3/4 of the way through April and summer starts next month. This is absolutely mind-boggling to me!

Regardless, I’m still cranking out recipes because I truly am stuck inside my house with three other people and we still need to eat.

While I have, since the beginning, been a dessert blogger, I love to throw things into the mix that are
1) not necessarily a baked good
2) are fun/quirky
3) can be used in a savory manner
4) can be used on or in other recipes on my blog. 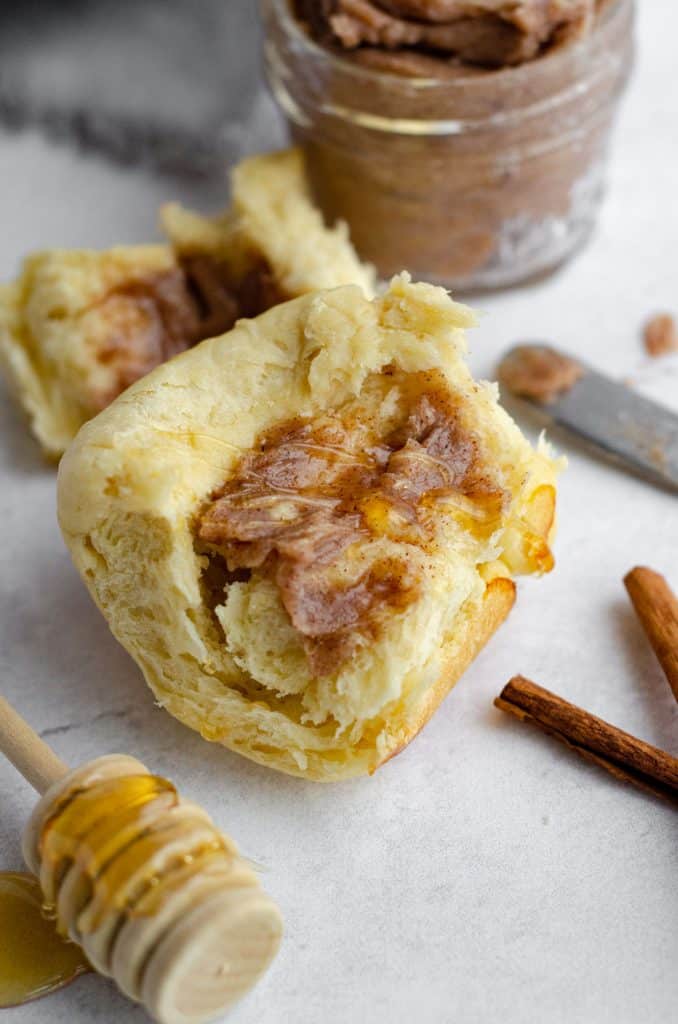 We aren’t starting from complete scratch and actually churning the butter from milk, but we are starting with plain ol’ butter and jazzing it up in the form of sweet and salty cinnamon honey butter.

And!! Because I know so many of you are loving my white sandwich bread, I’m bringing you yet another super easy yeast bread recipe next week to put this sassy butter all over. Stay tuned for that one!

So much bread + goodies for on top! So let’s get to it.

As I said, we’re not starting from super scratch, so we’re beginning our butter with one stick of softened butter.

I highly recommend working with salted butter here, but if unsalted is all you have, that’s completely fine. We’ll adjust the additional salt based on what you’re using.

Obviously, we’re doing some cinnamon and some honey in this butter. And we’re sweetening with juuuuust a bit of powdered sugar.

We’ll top things off with some sea salt to balance out all the sweetness, and… Well… There you have it, folks. 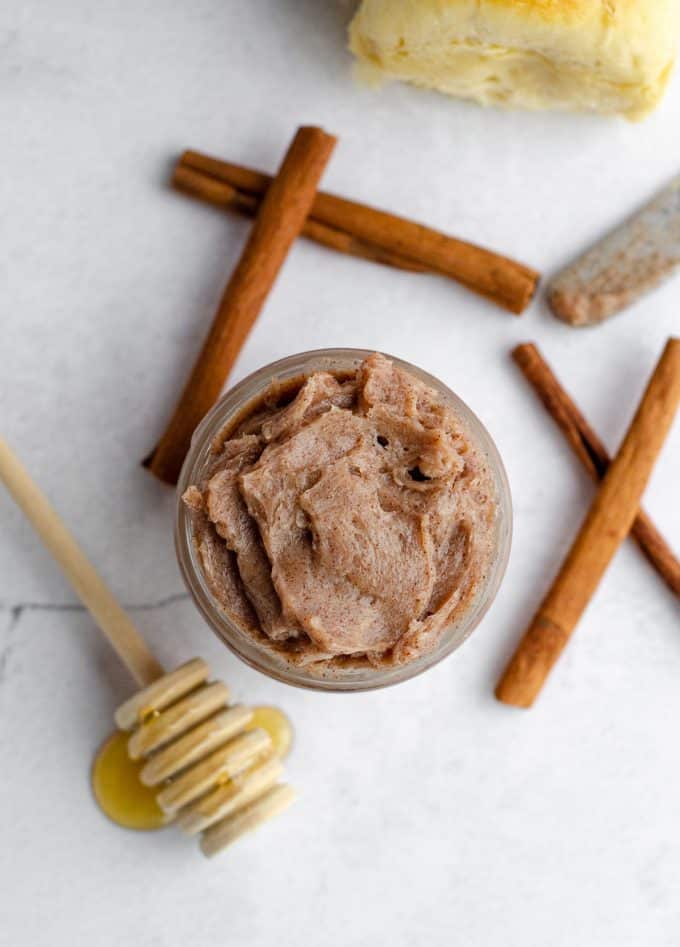 Just a few moments in the stand mixer or in a bowl with a paddle attachment and you’ve got yourself some finger lickin’, sweet and salty, Texas Roadhouse cinnamon butter.

If you don’t know what I’m talking about, I am so sad for you!

Perhaps grab a reservation at your local Texas Roadhouse when you’re able to sit in a restaurant again, and you’ll learn about the amazingness that is their in-house cinnamon honey butter.

I would venture to say this rivals that pretty well, especially because you can make it in the comfort of your own home and don’t have to order an entree to get a pat of it with a bowl of rolls.

That’s a pretty good deal, if I say so myself. 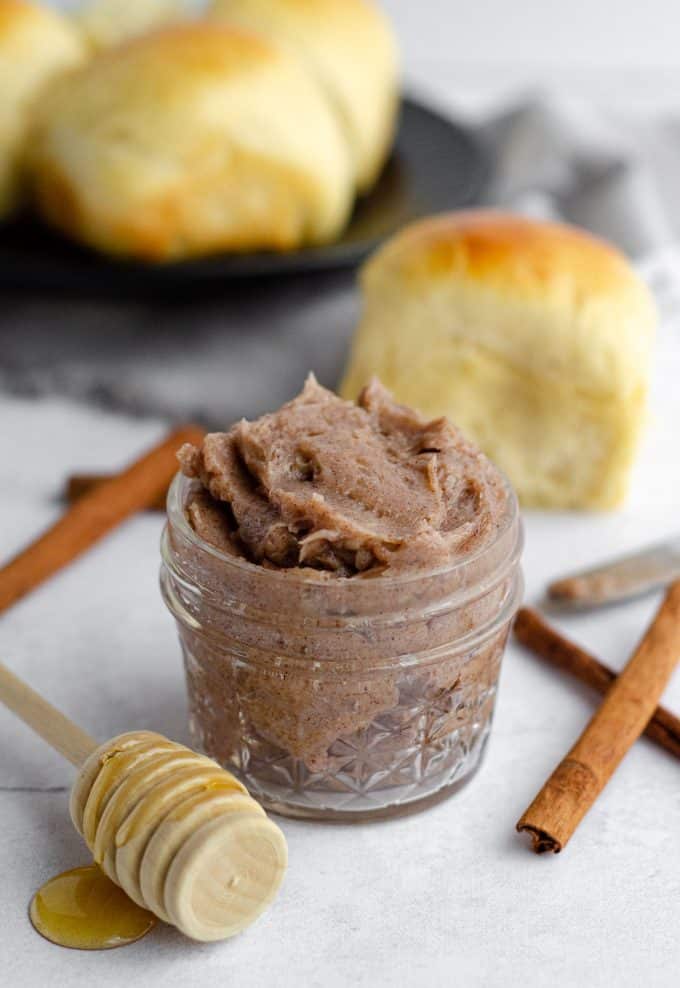 We put this cinnamon honey butter on top of the rolls that I promise to share with you next week, on waffles and pancakes, and even on sweet potatoes. Which was my FAVORITE.

I will admit, the older toddler ate some straight up, which I frowned upon initially, until I also had myself a small swipe on my finger. While I don’t necessarily condone eating butter straight up, I will go on the record and say that this cinnamon honey butter recipe is definitely worthy of eating all by itself.

I mean, these are weird times. Maybe eating butter right out of the jar is something you’re into right now to keep things interesting? It’s truly up to you.

But for sure, please keep making your own bread at home, because it makes me so happy to hear you say you did it and are PROUD of yourself, and then we have more reasons to whip up homemade cinnamon honey butter. 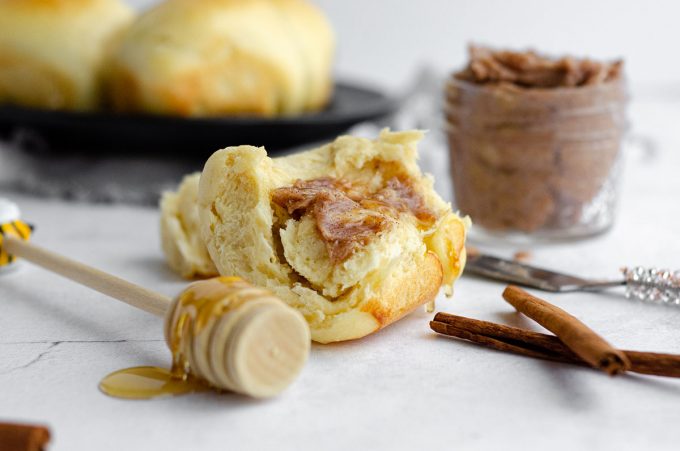 That’s not a bad world to live in, friends. 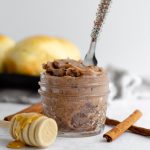 Making your own cinnamon honey butter is as simple as six ingredients. Perfect for topping yeast breads, sweet breads, and sweet potatoes, and could even be called a Texas Roadhouse copycat.
Servings: 12 Tablespoons

*Alternatively, you may use unsalted butter. Add an additional 1/4 teaspoon of sea salt.
Did you make this recipe?Mention @freshaprilflours on Instagram or tag #freshaprilflours!