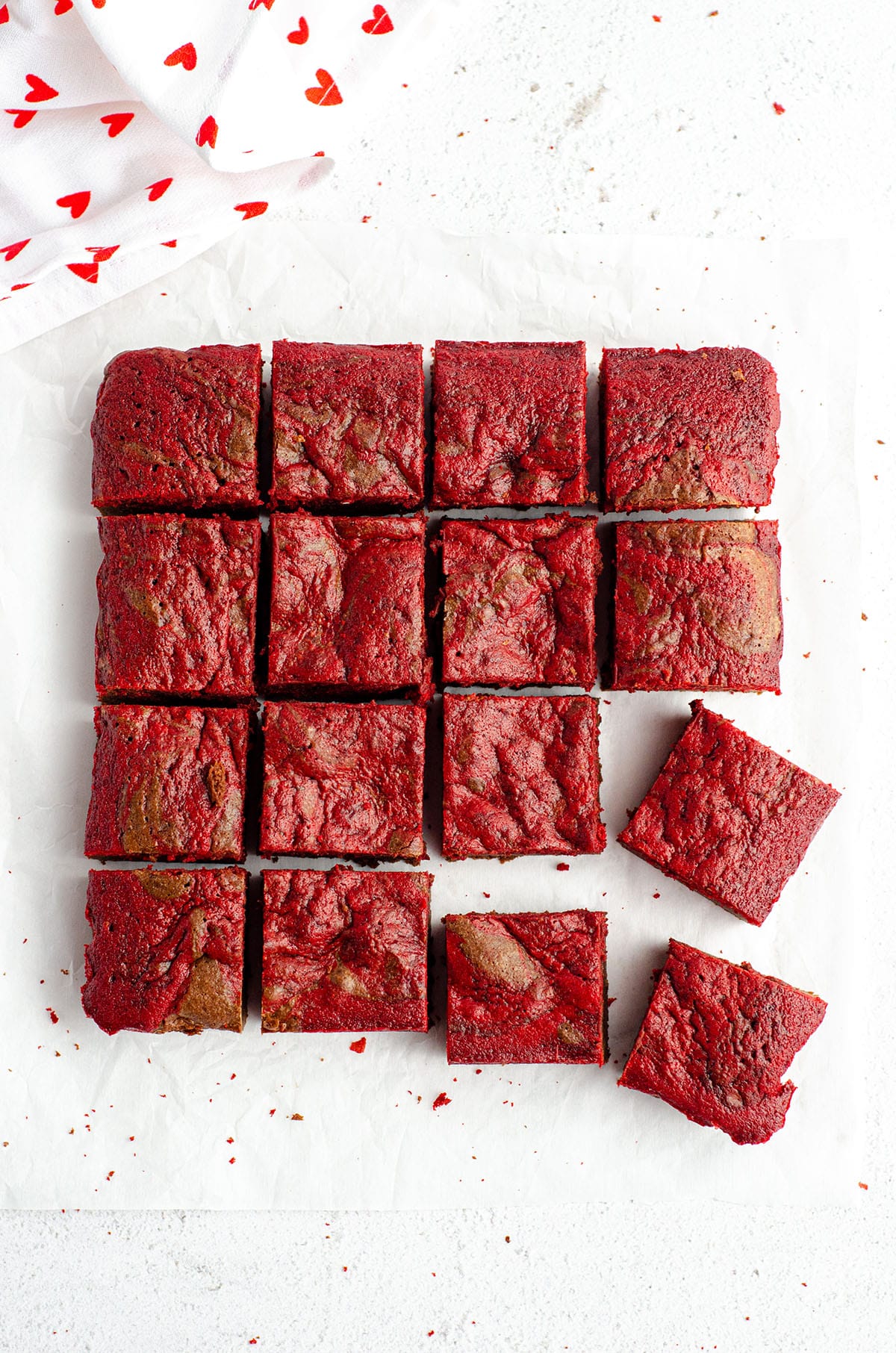 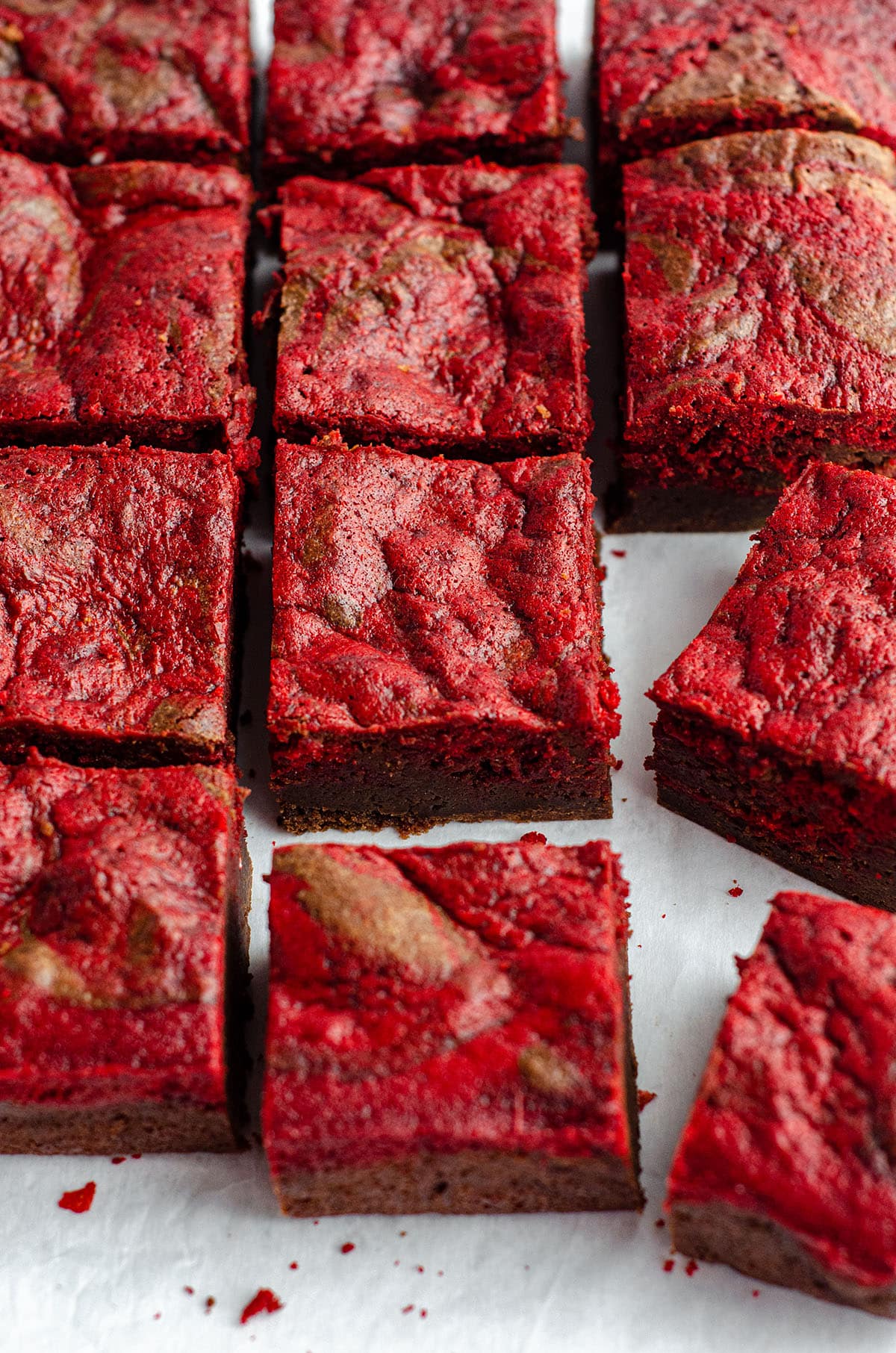 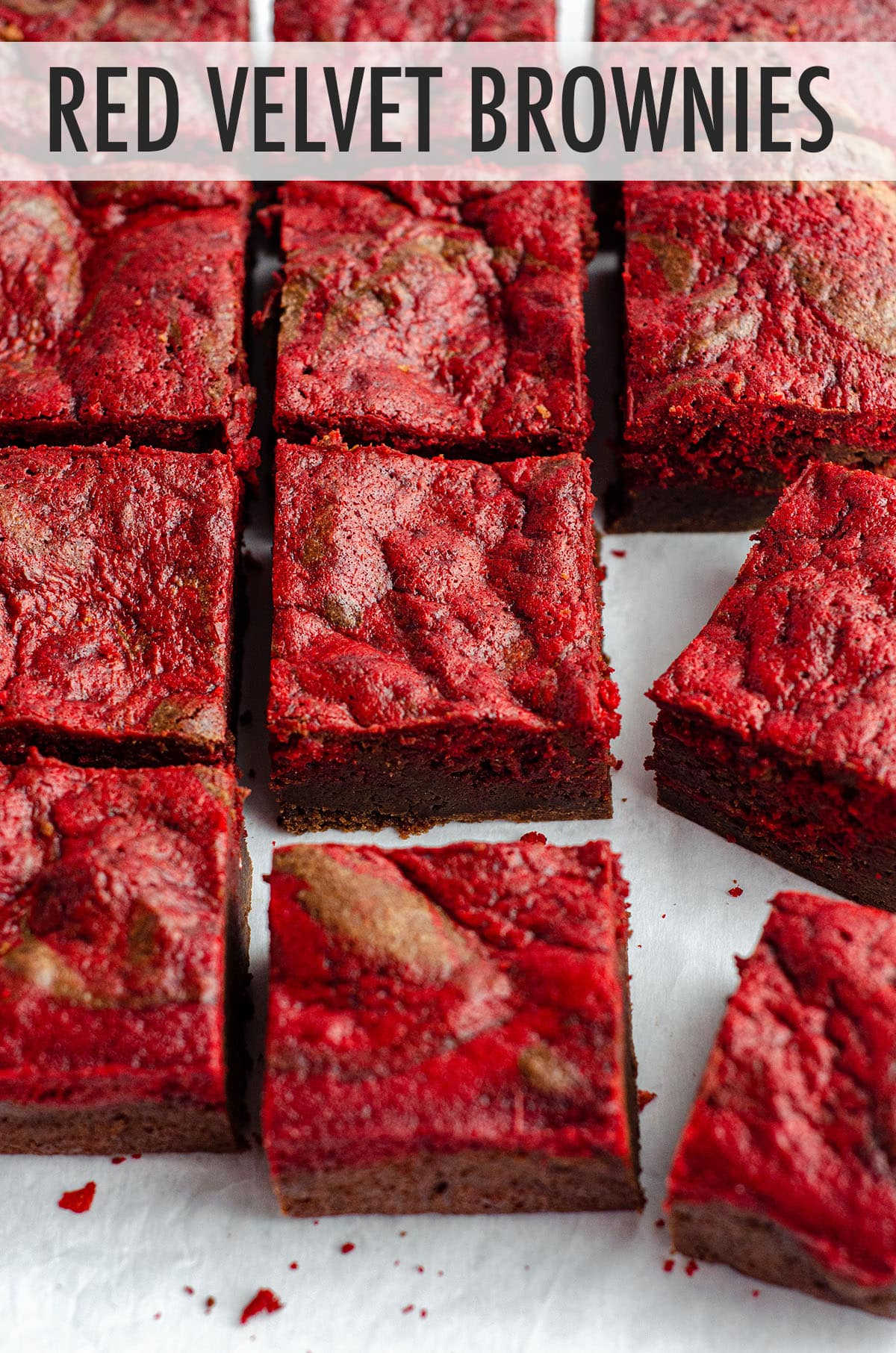 Dense and fudgy brownies swirled with red velvet cake– everything is made from scratch! 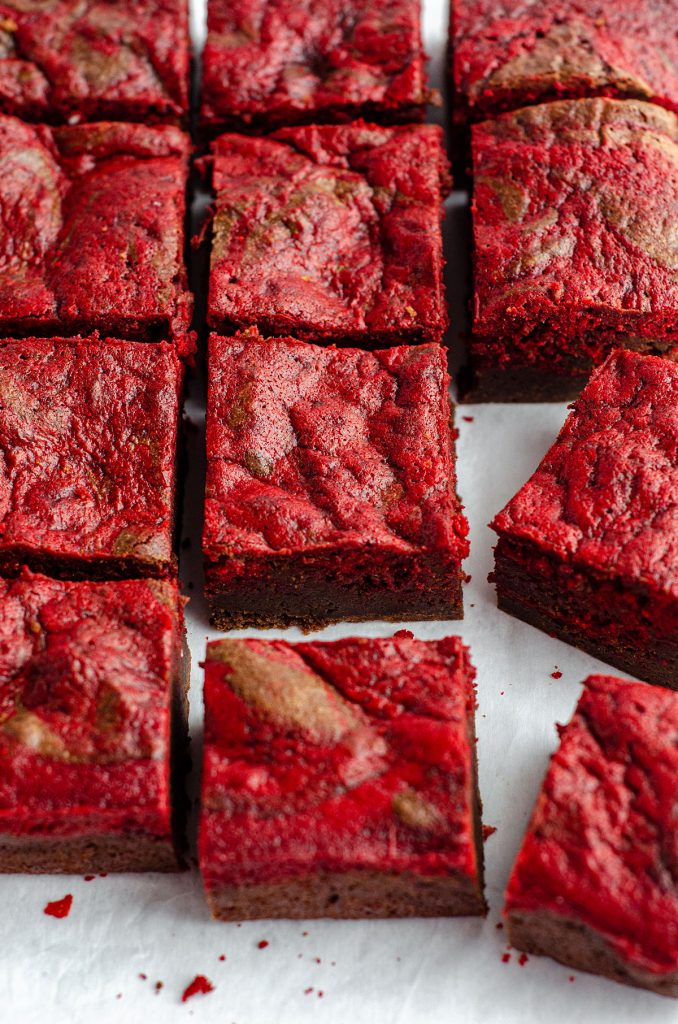 First week of February and we’re comin’ in hot with not only our second red velvet recipe this week (and third overall in Fresh April Flours’ red velvet week!), but also February’s Brownie of The Month!

Did you see yesterday’s red velvet blossom cookies? So adorable and so necessary for a holiday that doesn’t get much more than “chocolate” slapped on it as a staple treat for gifting. 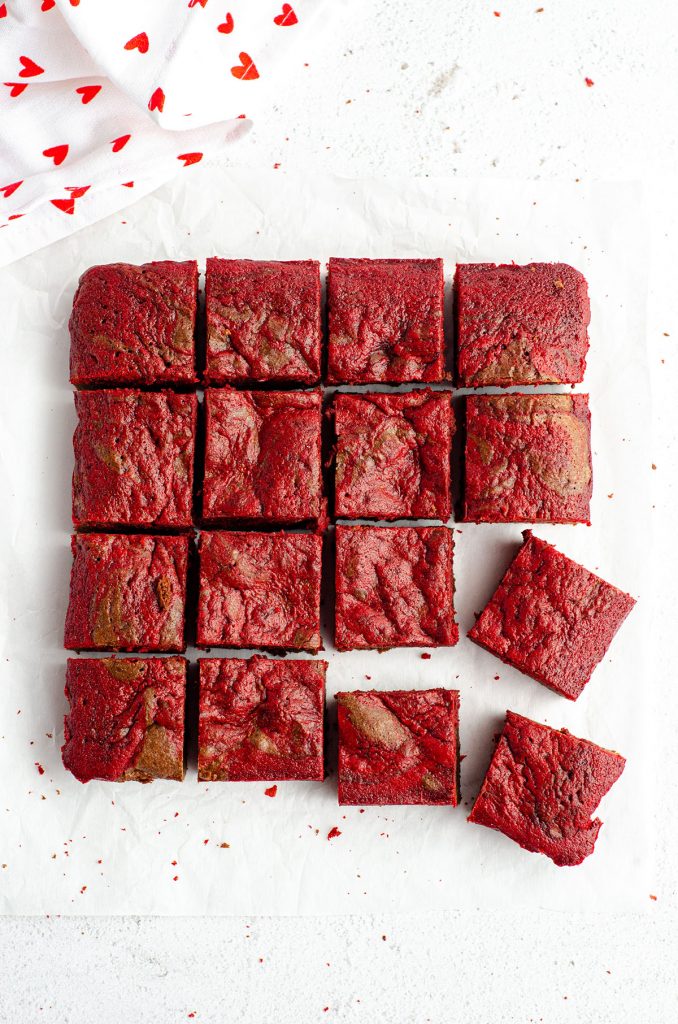 Last month, I kicked off my monthly brownie series with homemade fudgy brownies. I told you there that we’d be building upon that base recipe each month to add 11 more brownie recipes to our collection, so I’m excited to get the ball rolling with our first “remix” brownie recipe!

I have to tell you that I really truly debated internally making these red velvet brownies with cake mix for the red velvet component of them, but I decided on a firm “no” when I seriously thought about it. 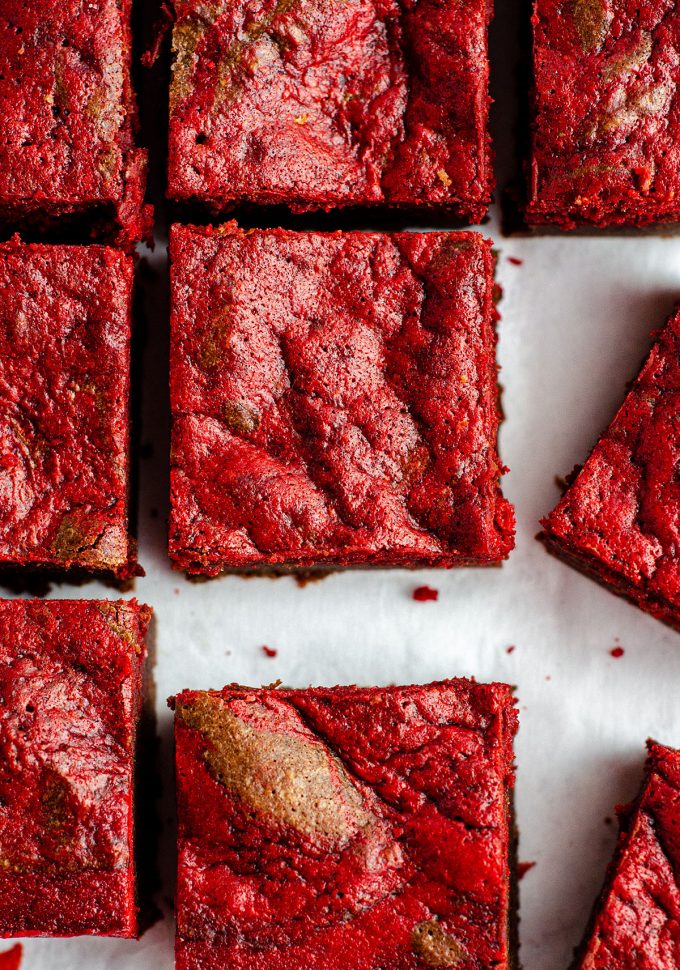 MADE WITHOUT ANY BOX MIXES

There is absolutely a time and a place for cake mix. Like in my cake batter dip, my red velvet Rice Krispies treats, or my red velvet pancakes.

I even have a recipe coming later this week that includes red velvet cake mix. 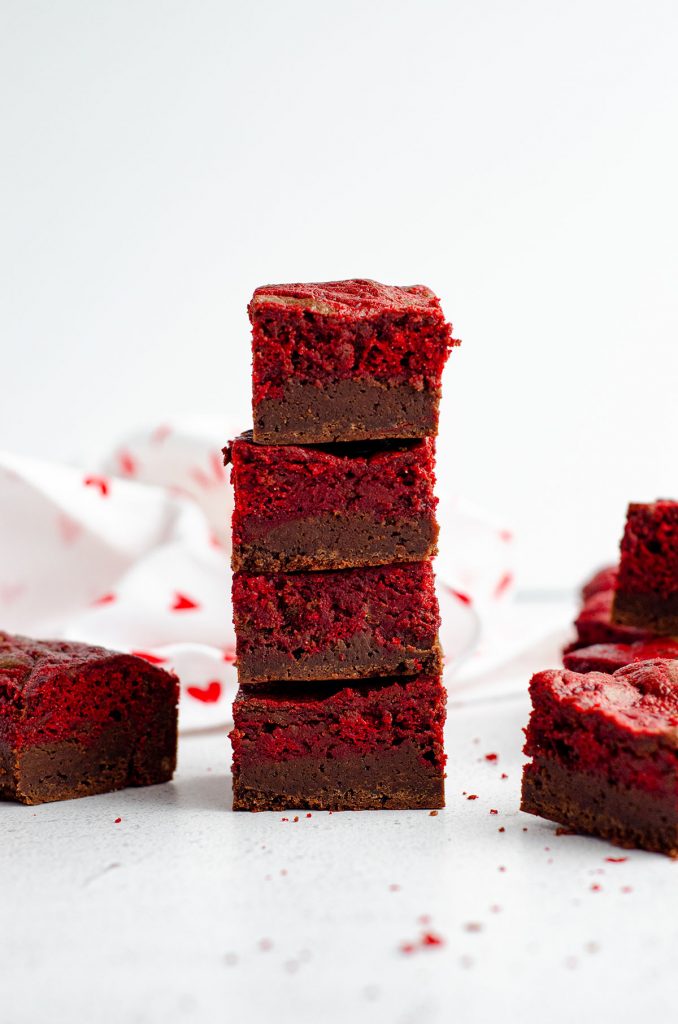 But fear not! The red velvet cake component from scratch is simple, and it doesn’t require a whole lot of extra ingredients than the brownie component does, so don’t panic when you see the long ingredient list.

One ingredient you will need, however, is buttermilk.

And recall (!!!!) that earlier this week, I kicked things off with a homemade buttermilk recipe, which is really as simple as milk + lemon juice or white vinegar, so take a peek at that post if you’re looking to eliminate something from your ingredient shopping list!

When it came to deciding exactly how to go about the red velvet swirl of these brownies, I turned to my beloved red velvet cupcakes. I worked hard to develop a light and fluffy cupcake recipe with those cuties, and I’m really proud of the end result.

Have you tried them? 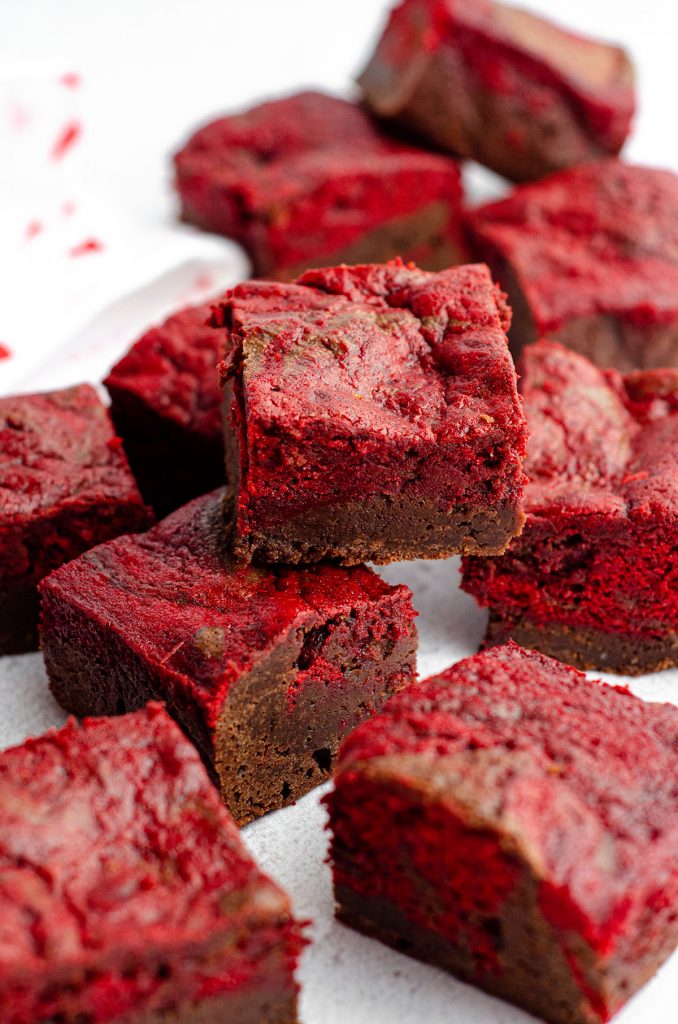 I am not, however, into any kind of “cakey” business when it comes to these brownies, so I had to do a little tweaking of the recipe in order to bring red velvet cake, but leave behind the cakey-ness.

I typically use whipped egg whites in my red velvet cupcakes to incorporate air. I also cream my butter and sugar to bring air to the batter as well.

Since I didn’t want to encourage much more lift than what the little bit of flour I use in my brownies, I decided to use a full egg in the red velvet cake batter and melt the butter.

I also went with 1/3 of the recipe for my cupcakes, and it turned out to be the perfect amount of red velvet batter to complement all the gooey, fudgy brownie batter. 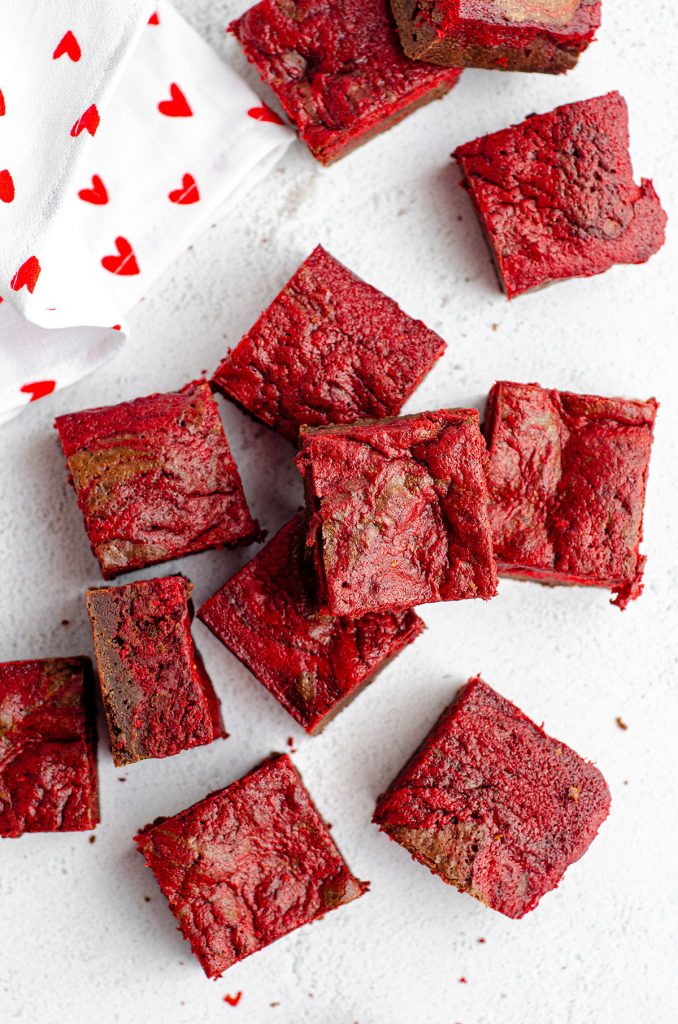 The end result of these red velvet brownies was to die for. There’s certainly a cake-like texture going on in there, but I was able to completely eliminate the cakey-ness of the cupcake batter with the sheer density of the brownie batter.

I shared a brownie with my younger toddler (who kept signing and asking for more), gave two away to the older toddler’s preschool bestie and her mom, and left the rest of the batch with my former coworkers on Friday afternoon.

I got a text on Friday evening asking for a pre-release of the recipe so one of them could make the brownies for the Super Bowl. She actually said “I think it’s the best thing I’ve ever eaten.” 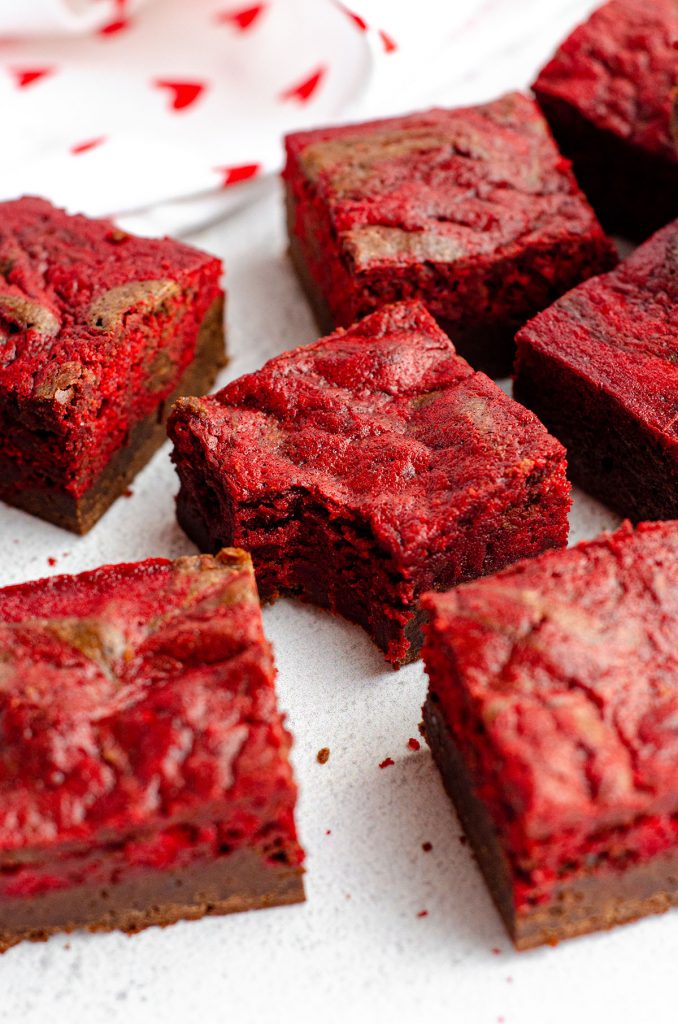 And that’s coming from a scientist. She knows proper research.

So there you have it, the best red velvet brownie. It must be, right?

I hope you love this month’s brownie recipe, and I urge you to give some love to red velvet at other times of the year. In fact, I’m thinking these would make an adorable Christmas brownie, especially with some festive sprinkles. 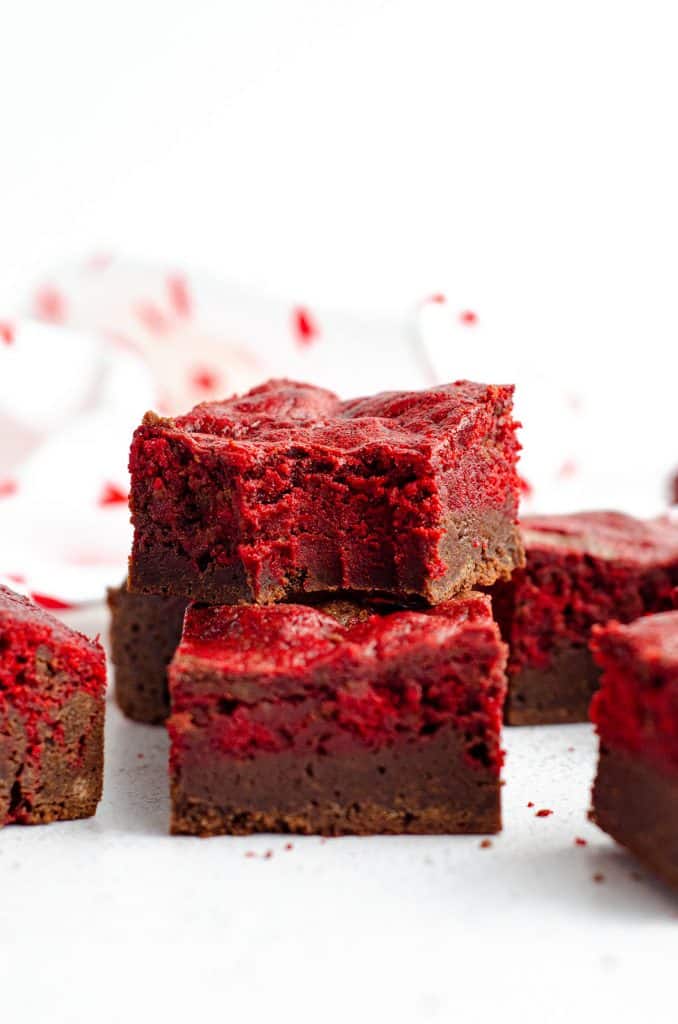 *Room temperature eggs incorporate into batter much more easily than cold eggs, although this is not absolutely necessary.
Did you make this recipe?Mention @freshaprilflours on Instagram or tag #freshaprilflours!