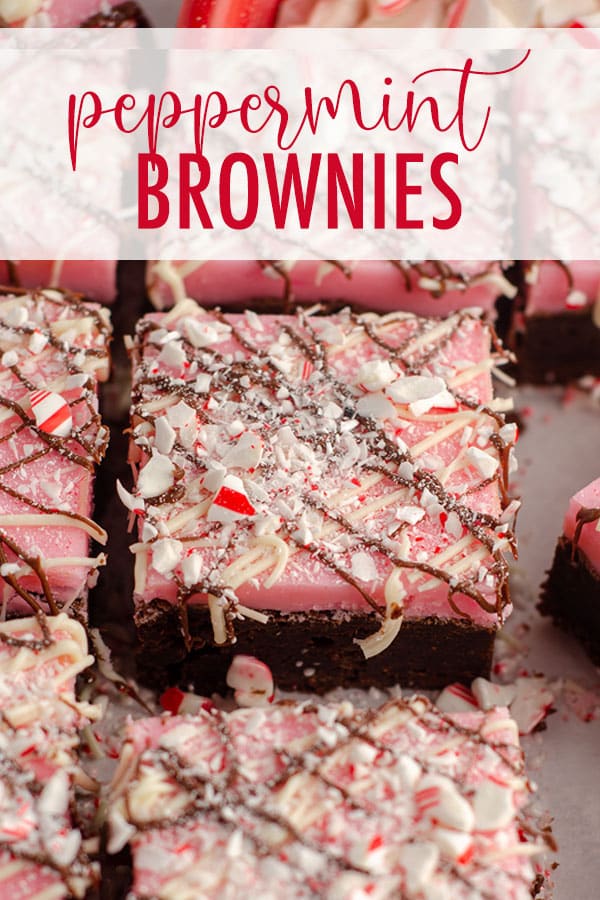 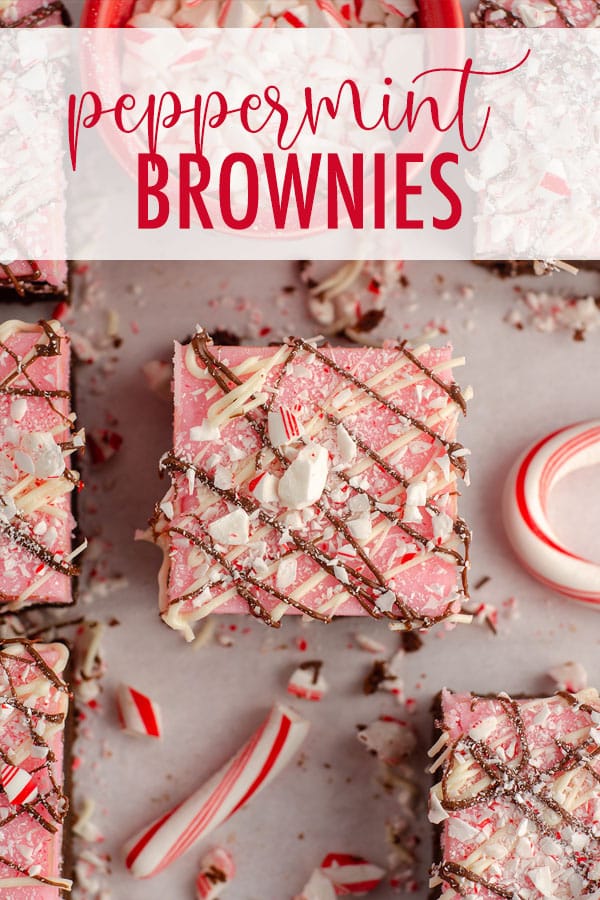 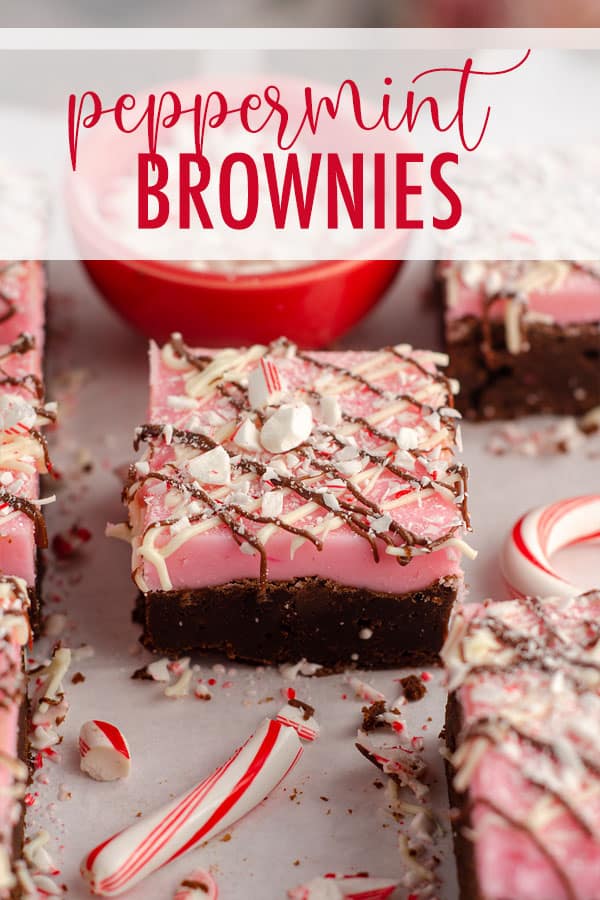 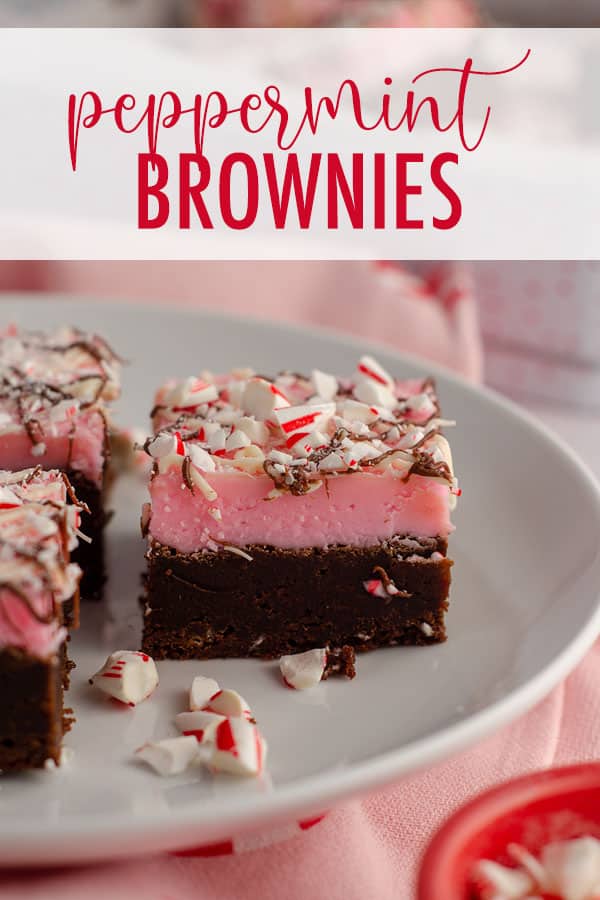 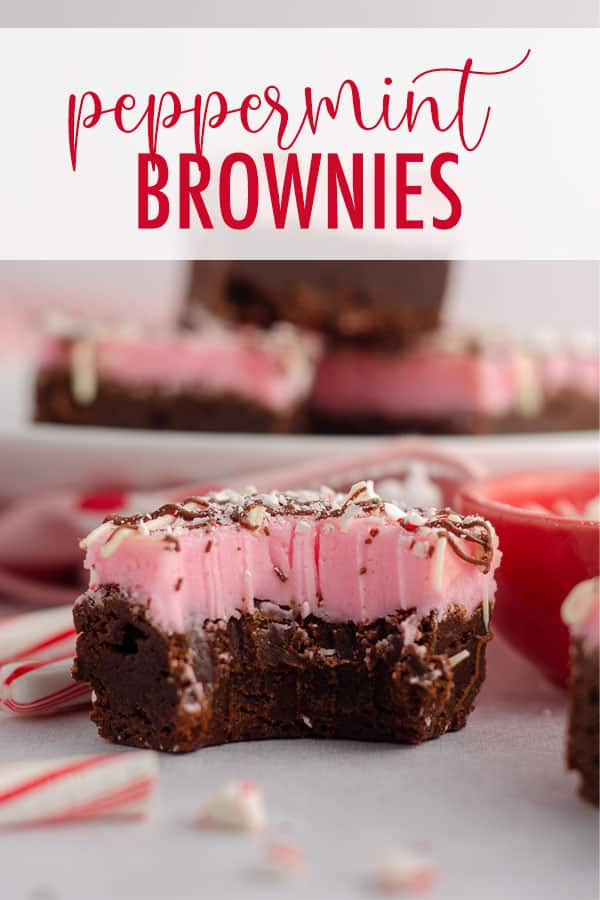 These peppermint brownies are made from a fudgy scratch brownie base and topped with a creamy peppermint buttercream. Top them with drizzled chocolate and crushed candy canes for a festive holiday treat!

And I don’t just mean in the “2020” sense. I mean from a baking standpoint, y’all made this first whole year of blogging full time totally a dream come true and I have loved creating recipes week after week that you all bring to your kitchen to share with your family and friends.

I had no idea at the end of 2019 when I picked brownies as my monthly recipe for this year that I’d have so many of you enjoying them right along with me, baking one every month, and sharing your pictures with me through Instagram, Facebook, and emails.

It was a SUPER fun year of monthlies, and I’m SO looking forward to 2021’s series of NO BAKE recipes! Check back next year for fudges, dips, pies, ICE CREAM, and so much more!

Let’s recap 2020, because if you’re just joining us now, WELCOME! You have 11 other brownie recipes to get to (LOL).

In January, we kicked off the series with my homemade fudgy brownies, which have no secret been the base for every brownie recipe to follow it.

That go-to brownie base is so simple, so easy, and beings perfect results every time. It’s the only scratch brownie recipe I’ve ever used and will ever use.

And it has proved its merit throughout this series, as evidenced by its ability to hold all different kinds of mix-ins, toppings, and flavorings.

March brought us mint chocolate brownies, which also gave us a smooth layer of chocolate ganache to top our brownies, so we obviously owe a lot of “yum” to that month.

April was all about the coffee– coffee brownies with mocha frosting took the spotlight there!

In May, we swirled Nutella into our brownies and all was right in the world.

June was all about combining a cookie texture with brownies for the ultimate peanut butter and chocolate brownie combo.

July brought us our first layered brownie with tiramisu brownies. We also added a coffee soak to these ones, which was AMAZING.

In August, we used caramel sauce and sea salt to turn classic brownies into drool-worthy, drippy ones.

September, of course, was all about the pumpkin with pumpkin cheesecake brownies.

October was EPIC as we put chocolate chip cookie dough inside our brownies and in the buttercream on top ( SO MUCH COOKIE DOUGH!).

November was all about the German chocolate, and that coconut pecan frosting was my BFF for a few days.

Which brings us to December… And you probably saw brownies with candy canes coming a mile away, right?

This peppermint brownies recipe is super simple, and you’ve totally seen it before.

I took the framework of March’s mint chocolate brownies, swapped green food coloring for pink, and broke out my candy canes and drizzling skills.

So I opted for this topping instead and left with zero regrets.

I still have a soft spot for white chocolate ganache, but we’ll leave that to the glaze on my strawberry bundt cake or whip it up for funfetti bundt cake.

Instead, these chocolate peppermint brownies rock a perfectly pink top with white and dark chocolate drizzles and a heavy hand of crushed candy canes on top.

I know you will be impressed and jingle all the way with them.

Of course, the pink tint is totally optional. You can leave it white, if you’d like! The color I used was AmeriColor’s “deep pink.”

The result of these layered, easy peppermint brownies is so much flavor and all the texture.

The dense and fudgy brownie bottom creates the perfect foundation for that creamy peppermint buttercream, and the drizzled chocolate on top with pieces of crushed candy cane bring crunch in a few different ways.

Let those crunchy bites sink into the brownie and buttercream and you’ve got yourself something like unto peppermint bark brownies that is unbeatable this holiday season.

So what do you say? End this year on a high note: grab this recipe, gather up your fam, and have one last brownie baking party to send 2020 off.

But first, tell me… Which Brownie of The Month installment was your fav?

These peppermint brownies are made from a fudgy scratch brownie base and topped with a creamy peppermint buttercream. Top them with drizzled chocolate and crushed candy canes for a festive holiday treat!
Prep Time15 mins
Cook Time25 mins
Total Time40 mins
Servings: 16 brownies