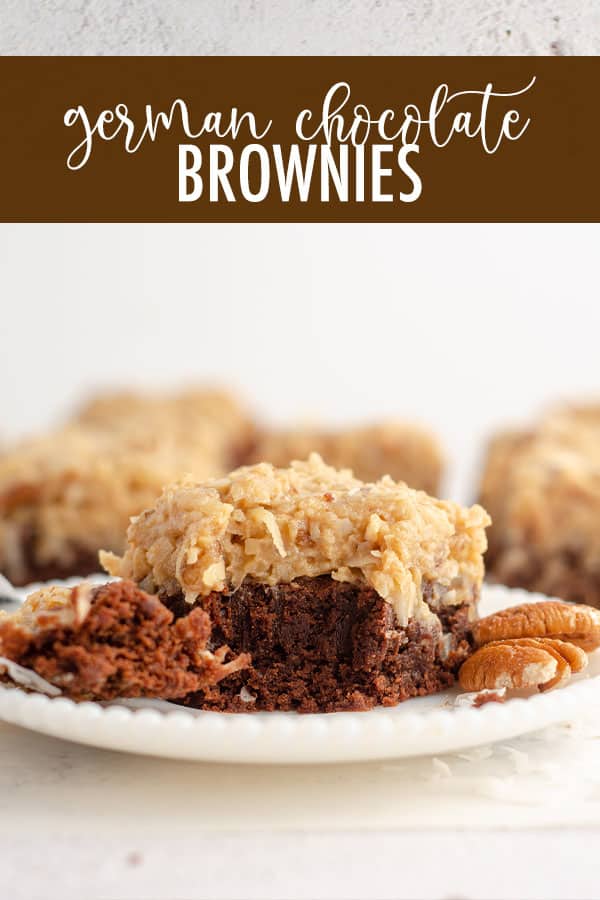 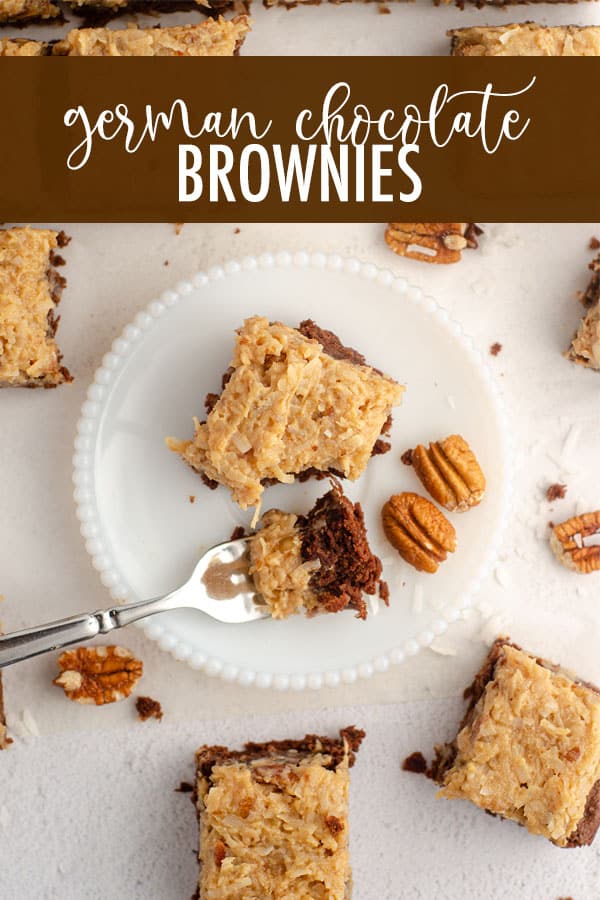 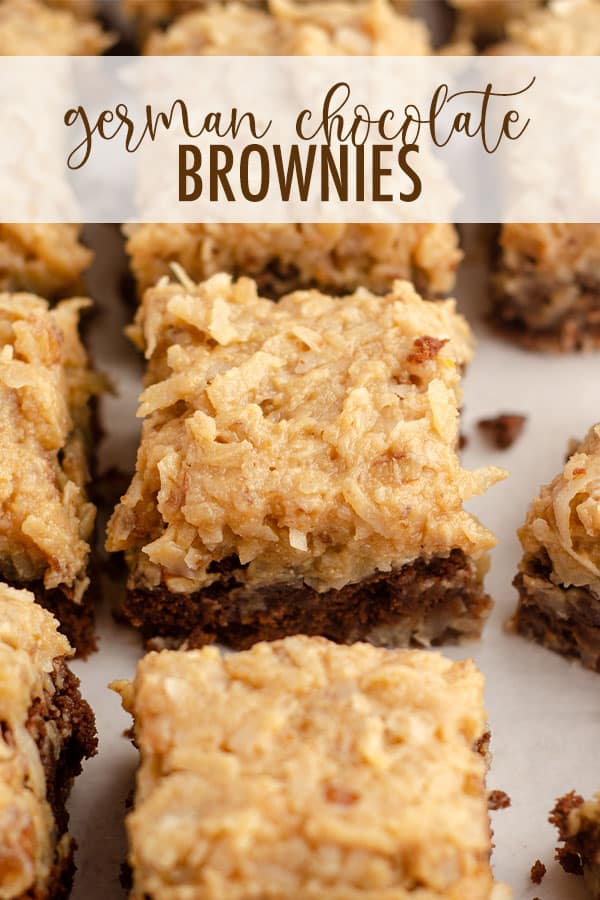 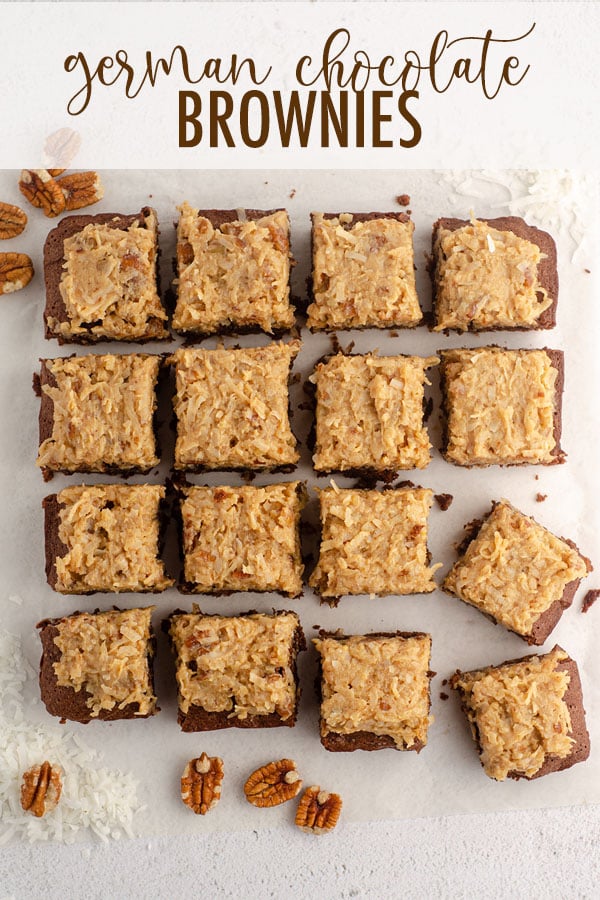 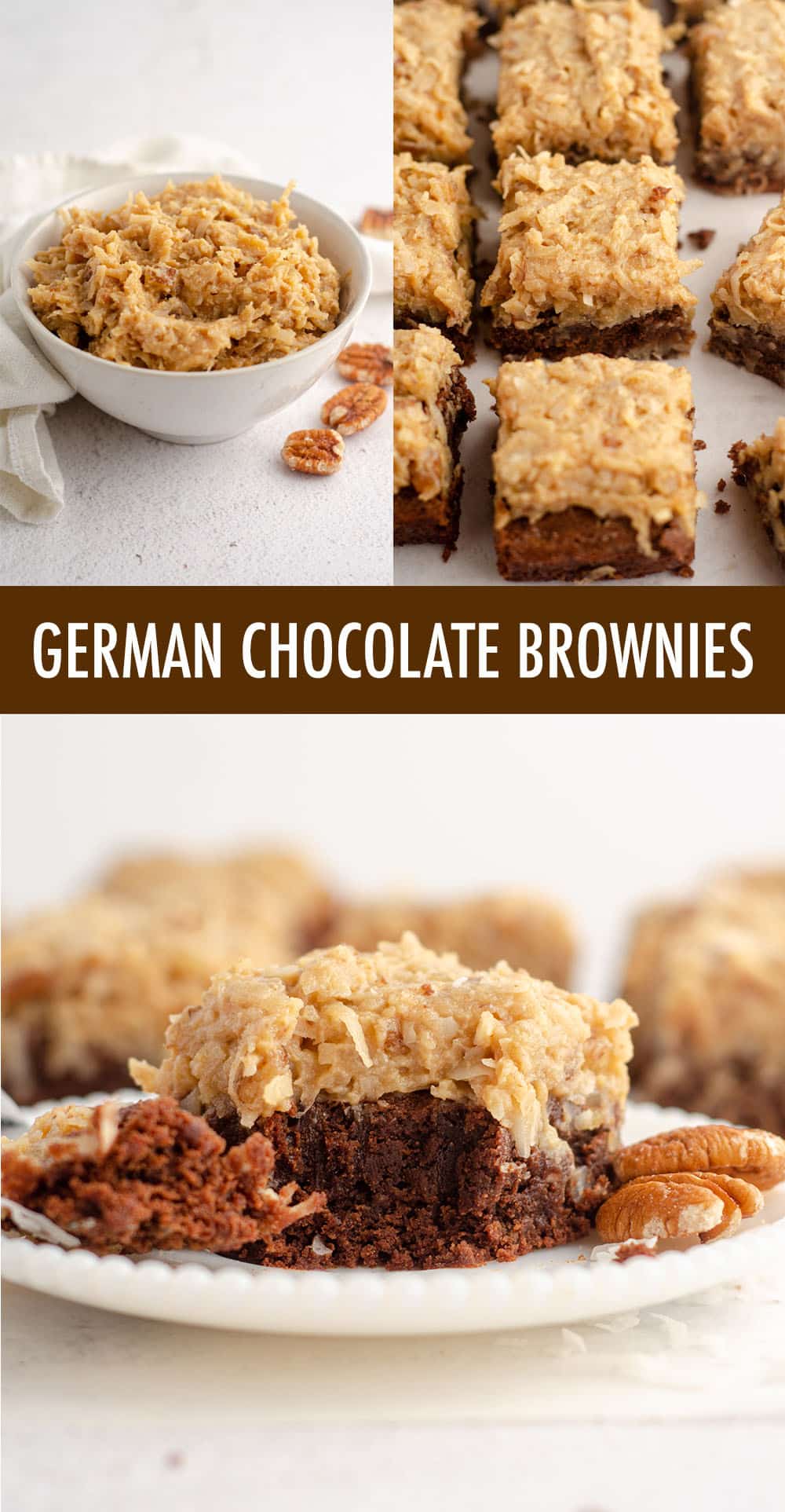 My classic go-to scratch brownie base gets topped with an ultra creamy coconut pecan frosting to turn them into indulgent German chocolate brownies.

It’s hard to believe that there’s just one more brownie recipe left in our 2020 lineup after this one, but I have to say… We (my house, our friends, our neighbors, and ALL OF YOU!) have been loving taking regular brownies and turning them into something fantastic.

There are many of you I know of who have made all 10 brownies in the monthly collection so far, and I’d love to learn of more of you who have done the same!

Which one has been your favorite so far?

The whats and whys of how I got to my brownie base are in that post, if you’re interested in knowing all of that.

Otherwise, the real bread and butter of these German chocolate brownies is in the coconut pecan frosting that tops the brownies.

As classic German chocolate cake goes, it’s made of layers of chocolate sponge cake with a coconut pecan filling between the layers and on top of the whole thing. There is ordinarily no traditional frosting involved.

That setup bodes well for German chocolate brownies, as in we can just top our classic brownies with coconut pecan filling to act as a frosting.

And let me tell you about this coconut pecan frosting– it is ultra creamy, full of texture, and the perfect complement to the rich, dense brownies underneath.

The coconut pecan frosting is very simple. The base is made by heating butter, brown sugar, and evaporated milk until it thickens. This creates a smooth base, ready to take on bits of sweetened shredded coconut and crunchy bits of pecans.

Once cool, this coconut pecan filling turns into a spreadable concoction we treat like a frosting, and it adds a whole new level of delicious to my already delectable fudgy brownies.

But I promise, they’re totally worth the wait!

Dense and fudgy brownies topped with a nutty and coconutty texture lover’s dream are the perfect chilly weather brownie, and the perfect way to kick off the end of our year-long brownie celebration. 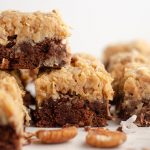 *Room temperature eggs: these incorporate into batter much more easily than cold eggs, although this is not absolutely necessary.
Did you make this recipe?Mention @freshaprilflours on Instagram or tag #freshaprilflours!
Pin
Share
Email
Share
Tweet

In the brownies, is it safe to assume dark brown sugar since you indicated light for the frosting? I usually use light unless it says dark.

I always use light brown. I added the word “light” in the recipe to be clearer!

The brownie…is the star of the show for me! I gave it four stars for the brownie alone. The fudgey moistness, omgeee – delicious. I thought I knew what fudgey was, but this is the definition right here!! The frosting didnt give me German chocolate vibes. I’m not sure if it was my brand of coconut but the actual frosting had a faint taste to it. Maybe I can try it with dark brown sugar next time to get more of an intense flavor. It’s hard to find Bakers coconut where I live. The other brands have awful texture, too chewy/hard. Thanks for sharing. I bet the oreo ones are the bomb.com.

Found this recipe and since German Chocolate is one of my favorite cakes…thought I would give it a try….it was interesting….loved it…will absolutely be making it again…but my frosting did not turn out as thick as I would have liked…still yummy though. 😊

Oh my gosh these brownies were perfection. Thank you!

So glad you liked them, Lisa! Thank you!