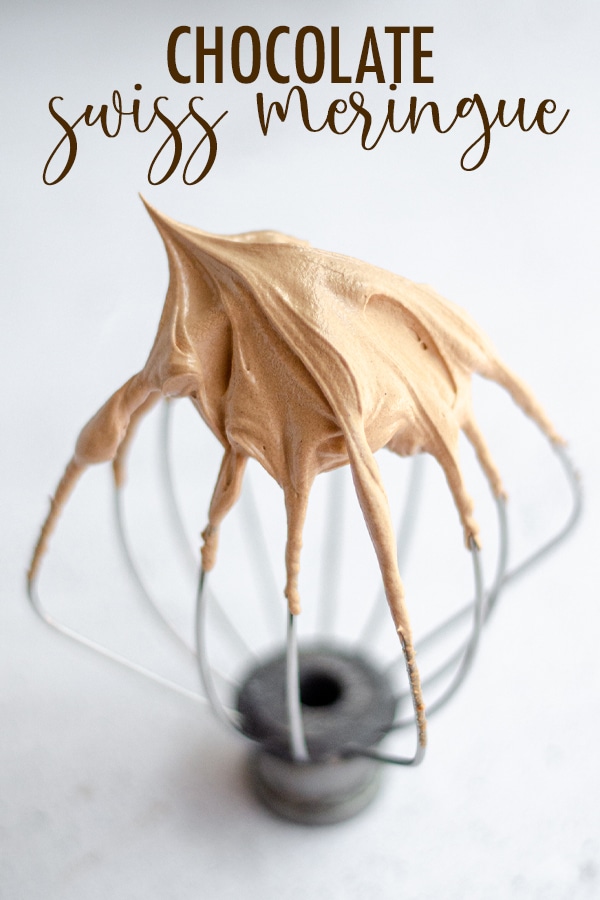 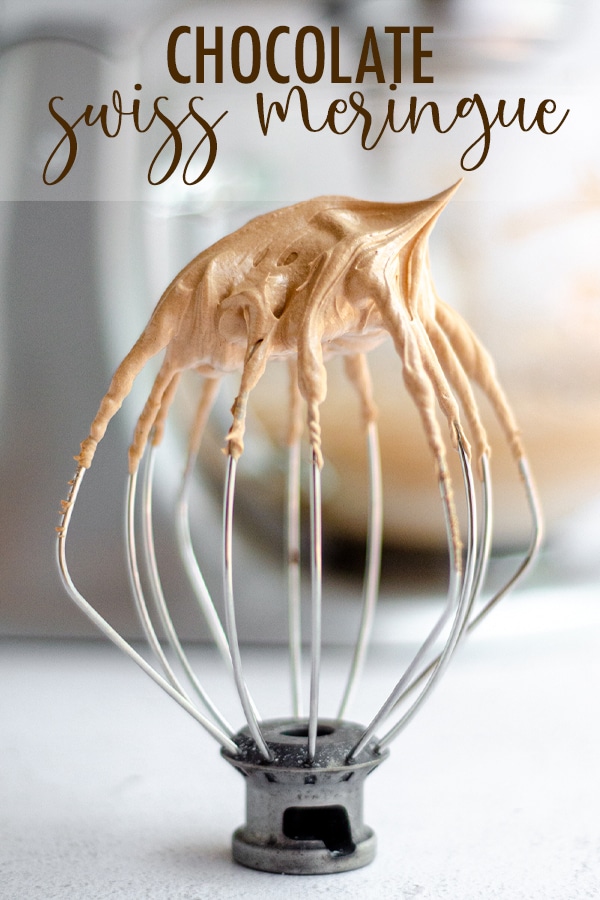 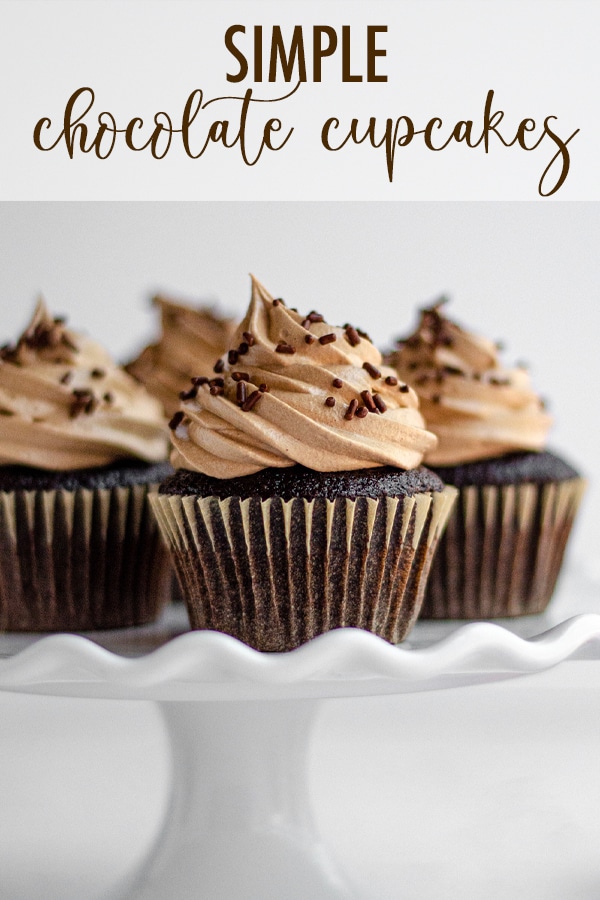 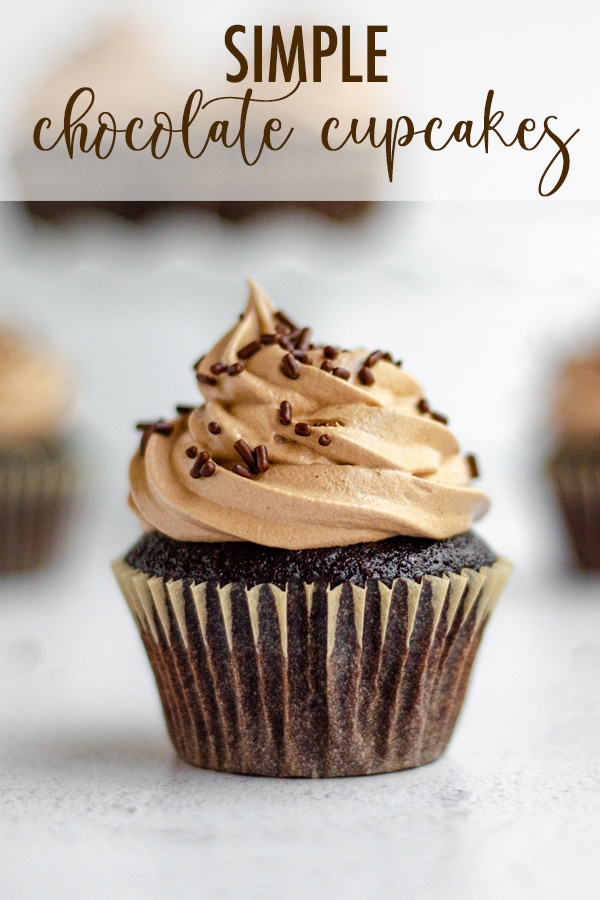 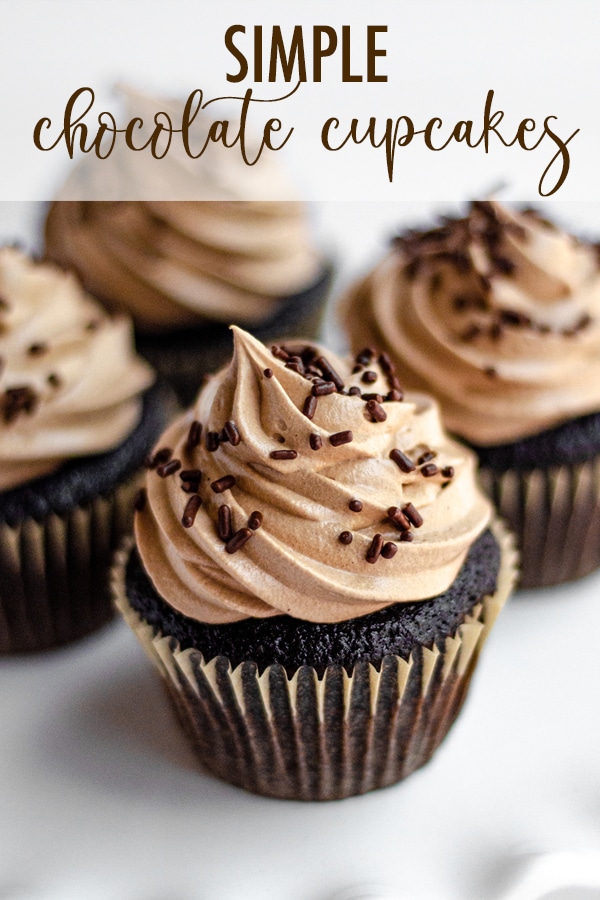 My go-to simple chocolate cupcakes are fluffy, moist, and don’t even require a mixer. Top them with a velvety smooth chocolate Swiss meringue buttercream (or pair with another favorite) for a simple yet impressive little cupcake!

I am so grateful for my Fresh April Flours community.

Since the beginning of my blogging journey (6 years ago!), I have had faithful readers who have seen me grow from a hobby blogger, to part time blogger, to now full time blogger.

Thank you, all of you, for being here, regardless of when you got here!

That said, I am tipping my hat to the FAF community for today’s recipe, because a post in my Fresh April Flours Baking Community Facebook page is really where the idea for today’s chocolate cupcake recipe came from.

Let’s back up a bit: I am forever answering personal texts, Insta DMs, and Facebook messages or comments about whether or not I have a certain recipe. And I LOVE this. More often than not, the answer is yes, and I happily pass on a link to the requester.

I included a few out-of-the-ordinary recipes in there (lookin’ at you s’mores layer cake and champagne layer cake), but I really wanted to give my readers and the FAF community bases for classic cakes, because what kind of baker are you if you don’t have classic go-to’s of everyone’s favorites?

I became hyper-aware of the fact that my cupcake collection is fairly creative and not so much in the “classic” direction (aside from red velvet cupcakes and lemon cupcakes) when a friend of mine said she used my chocolate layer cake recipe to make cupcakes and had a lackluster report.

Umm… Those directions are so not helpful at all.

So I was compelled to present my favorite simple chocolate cupcake recipe in its own recipe post so it was
1) easy to find for my readers
2) it wasn’t just hidden under adorable chocolate frosting footballs and vanilla frosting laces
3) was presented with the whats and whys of the ingredients because a FANTASTIC CHOCOLATE CUPCAKE is what one should get when he/she wants one.

And please, don’t worry… We will get to that fabulous chocolate Swiss meringue buttercream shortly.

The deeeeeep chocolate flavor comes from not only Dutch processed cocoa powder, which creates more of a dark chocolate feel, but also complemented by coffee.

I use brewed coffee in this chocolate cake to enhance the already chocolatey notes of the cake. If you’re concerned about caffeine, go ahead and use decaf. Or, leave it out and just use water.

The flavor of the cake without the coffee will still be absolutely delicious, you just won’t have that little extra something that intensifies the chocolate flavor from the Dutch processed cocoa.

We’re also using a lot of fat in these cupcakes in the form of eggs and oil.

While butter is a typical go-to for cakes like yellow and white, we’re opting for a neutral fat to bring extra moisture (sometimes butter can dry out baked goods) and also give the cupcakes a luscious texture.

The result is a soft, puffy, and moist chocolate cupcake that can hold up to any frosting you’d like. But I wanted to bring something new to the blog, so I chose a chocolate Swiss meringue buttercream.

Now this buttercream can be a little intimidating, but I will be honest and say, it’s not as scary as I thought it would be.

If you’re ready to take the plunge and learn chocolate Swiss meringue buttercream… Let’s do it!

We talked a little bit about Swiss meringue buttercream when we tackled lemon macarons a few weeks ago. I begin this buttercream the same way I begin my macarons– by making a simple meringue.

Create a double boiler (which is just your mixing bowl set on top of a pot of simmering water), and whisk the sugar and egg whites together until the egg whites are bubbly and opaque and you can no longer feel sugar between your fingers if you dip them in and rub them together.

After you cook the egg whites, you’ll whip them to medium peaks, which will resemble the texture of shaving cream.

A good way to test for medium peaks is to pull your whisk attachment out of the meringue and flip it upside down. If the peaks flop over a bit, they’re medium. If they flop over a lot, you’re not quite there. Keep whipping.

This whipping stage will also give your meringue some time to cool down, because we don’t want it to be too warm for the next step…

…which is adding butter, one Tablespoon at a time.

With the mixer on low, add one Tablespoon of softened butter and let it incorporate before adding the next one.

Once all of the butter is in, you can whip it again to form medium to medium-stiff peaks. If it’s not getting anywhere, it’s possible your mixture is too warm, and it’s completely fine to pop it all in the fridge for about 10 minutes to cool it off.

I had to do this twice during my photo shoot because it was a ridiculously hot day. Temperature and humidity can play a big role in the process here, so don’t panic and use the refrigerator to your advantage if necessary.

Once you have medium to medium-stiff peaks again, add in the cooled melted chocolate, vanilla extract, and salt. And here’s where you’ll beat it to stiff peaks.

You’ll remember from our macaron lesson that stiff peaks are those that stand straight up when either the whisk is flipped upside down or a portion is pulled out of the bowl.

We want this nice and sturdy.

Because OMG, guys. Look at how beautiful it is.

That’s what I love about Swiss meringue. If you’ve ever had a cake or cupcakes made and you want “that whipped, not-as-sweet frosting,” Swiss meringue buttercream is what you’re asking for.

Which, fun fact, you can get if you just leave out the chocolate from my recipe. Ta-da!

But for the purposes of today’s amaaaazing simple chocolate cupcake situation, chocolate was so necessary.

I’m so glad that my friend asked for a chocolate cupcake recipe. I love sharing my fun flavors with all of you, but I also know that having a solid series of basics is essential to the home baker. And I hope this cupcake can be that for you!

Again, as always, thank you so much for being here and trusting me to guide you in your kitchen! I’m excited for you to try these delectable chocolate cupcakes and try your hand at some “fancy” chocolate Swiss meringue frosting.

I can’t wait for you to surprise yourself with your skills! 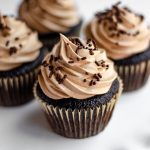