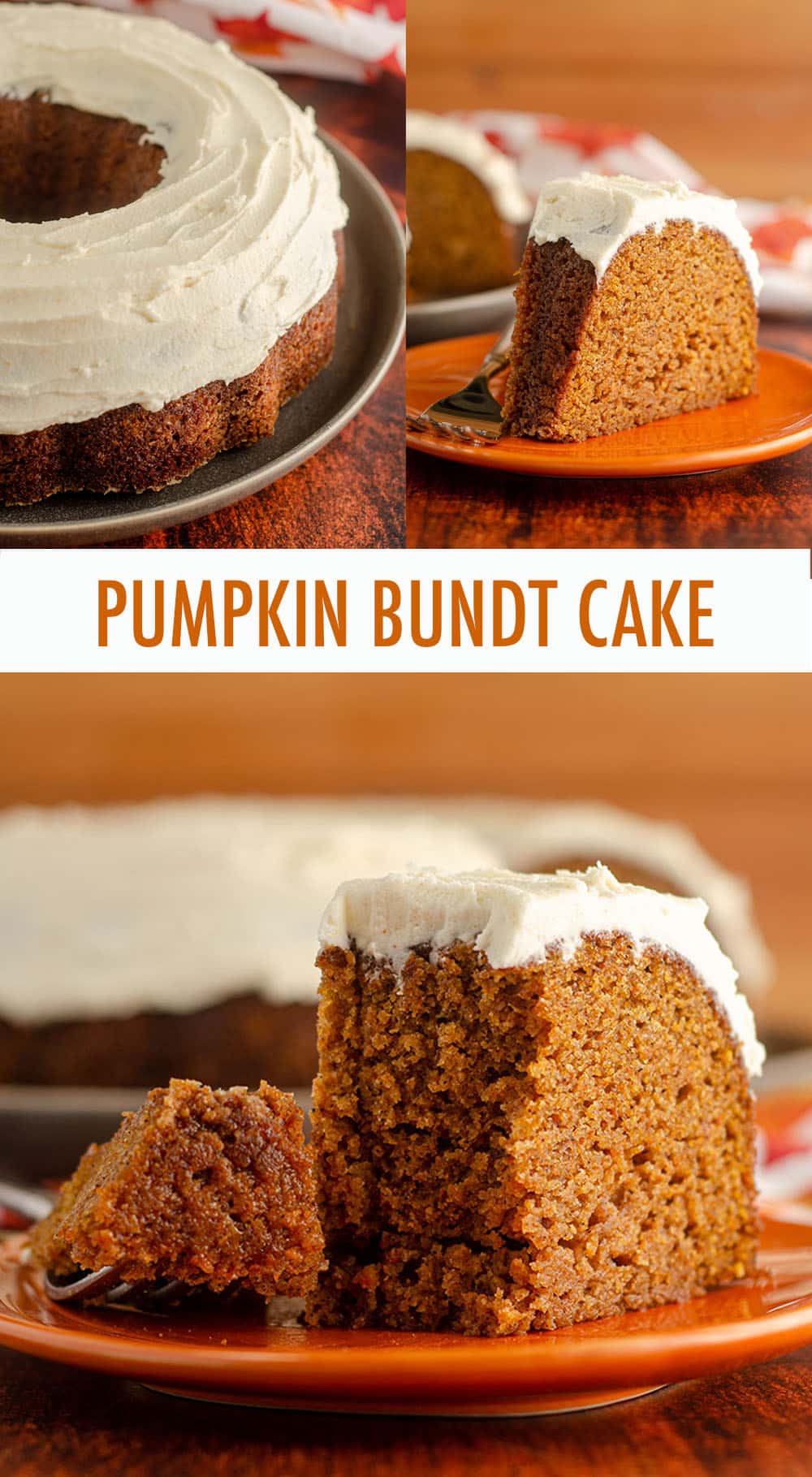 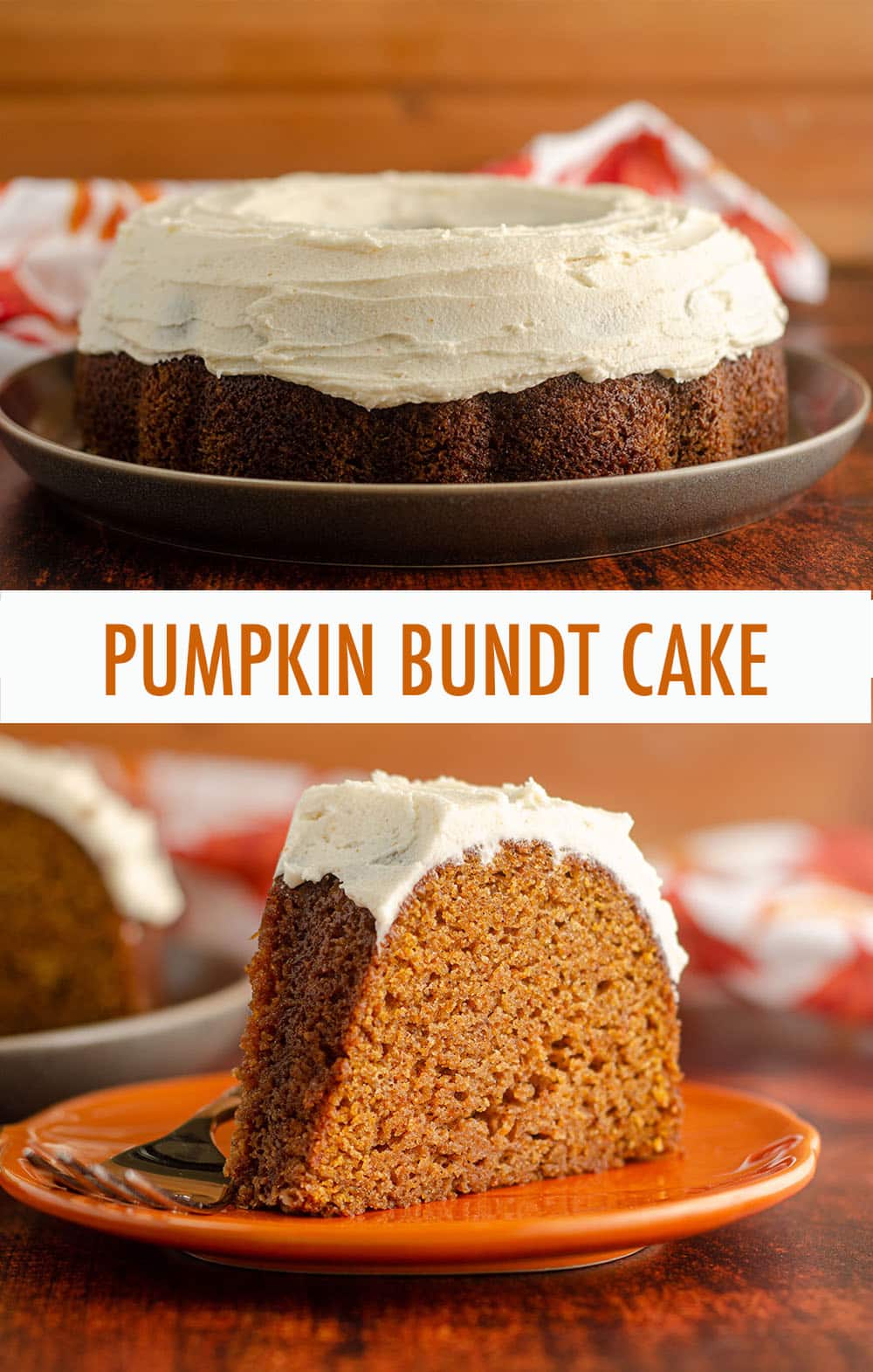 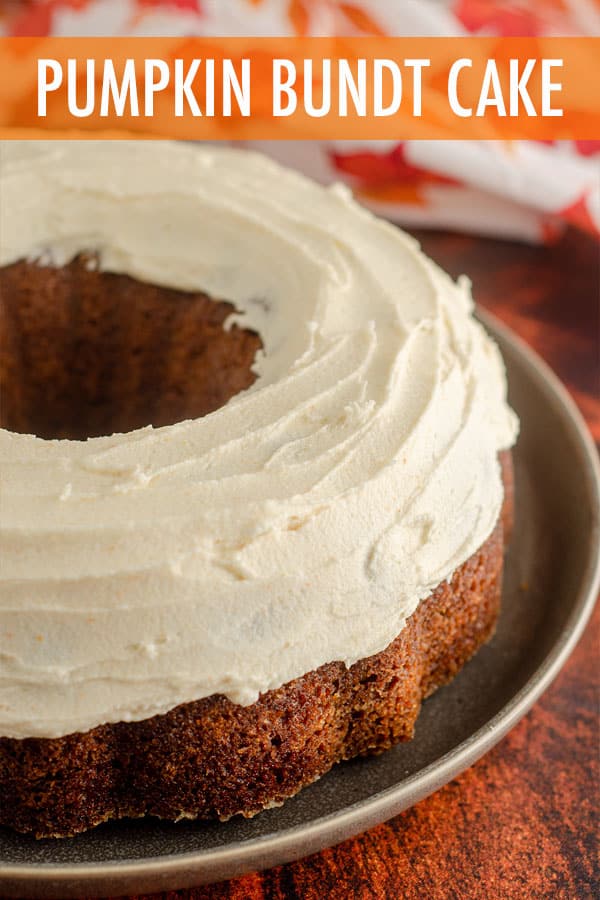 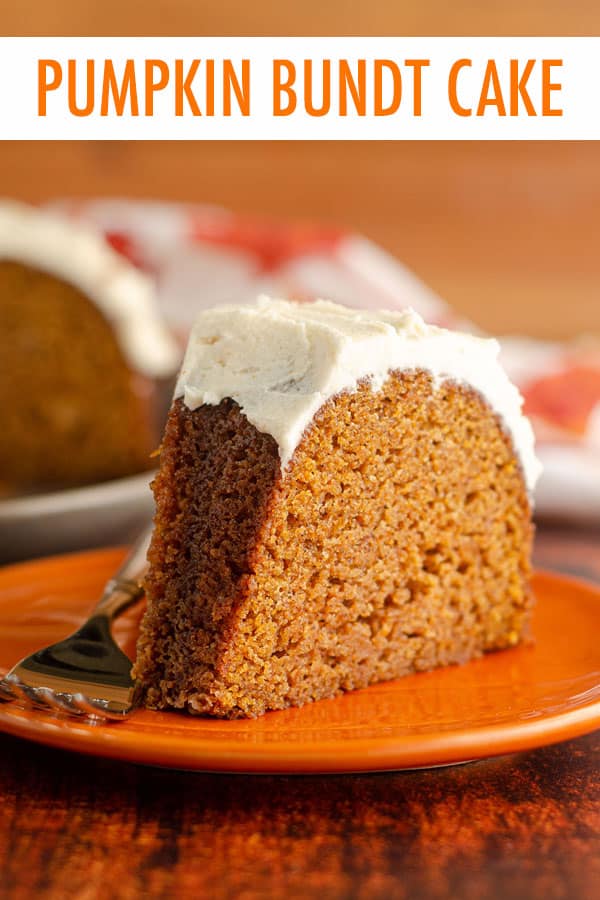 Moist, spiced bundt cake made with real pumpkin and covered in a decadent brown butter buttercream.

If there’s one way to round out a week of pumpkin recipes, I think that some pumpkin cake is the way to do it, yeah?

We’ve visited lots of pumpkin treats this week, but I think this one was our favorite, and the one that lasted even fewer hours than the pumpkin Rice Krispies treats did. Which was… Umm… Less than 36 hours.

Now, granted, we shared this pumpkin bundt cake with several taste testers, but of the folks I personally gave slices to, I barely got done telling them what it was before they were licking the foil.

The cool part about this cake is that, like many recipes on my blog, you have seen this recipe before. In 2017, I did a Cake of The Month (just like I’m doing a Brownie of The Month this year), and for September, I did a browned butter layer cake with maple cinnamon cream cheese frosting.

That cake was BANGIN’.

And since I just love turning layer cakes into bundt cakes, I figured this was the perfect place to do it.

I did, however, change some things up, because I wanted to make a buttercream I hadn’t tried yet.

I decided to pull the brown butter out of the cake batter and use it in the buttercream instead (I’ll get to that), so I simply used melted butter in the cake batter.

Now, for the brown butter buttercream… Have you browned butter before? It can be tricky to get at first, but it’s pretty simple once you learn what you’re looking for.

In that original brown butter pumpkin cake recipe, I mentioned that I liked to use a light colored pan to brown my butter because I could see it cooking better.

I no longer have to use a light colored pan, so that should tell you it’s easier once you know other signs to look for!

HOW TO BROWN BUTTER

You’ll start by cutting your butter into 6-8 slices. Toss it into a saucepan over medium heat, and swirl the butter around.

As it melts, it will turn light yellow. As it cooks, it will turn lemon yellow, golden brown, and then be at its peak/finest moment when it becomes a beautiful amber color and emits a nutty aroma.

While the butter melts and cooks, the milk proteins in the butter separate out and start to cook in the bottom of the pan. These bits will brown faster than the butter, and that’s exactly what we want to happen.

As the milk proteins cook, the butter will quickly transition and you’ll need to remove it from the heat as soon as you see it starting to turn amber. These cooked milk proteins is where we get all the flavor we want in our buttercream.

There is one super important step here that is crucial to having success with this brown butter buttercream. You’ll need to let your butter cool down a bit before chilling it in the fridge for about an hour.

WHY DO I HAVE TO CHILL MY BROWN BUTTER?

Once you brown butter, you’ve melted it, and if your recipe calls for something other than melted butter, you’ll need to get the butter back to that state in order to use it correctly.

A bit of powdered sugar, vanilla extract, and a pinch of salt will give our buttercream some stability and sweetness, and you can thin out the consistency with milk or cream.

Because the butter will be so soft, you can add the milk or cream little by little so as not to make it too runny. Add more powdered sugar or liquid as you see fit to make the consistency you prefer.

I’ve got to say, this brown butter buttercream is insanely good. I was not expecting it to be so good, but we kept eating little nibbles of straight up buttercream from what was leftover during my photoshoot.

Putting the brown butter into the buttercream was totally the best move ever, and pairing it with pumpkin cake was maybe the smartest confectionary choice I’ve made all of 2020.

Or at least a close second with sourdough cinnamon rolls.

I hope you’ve enjoyed this week of pumpkin recipes and will add some new bakes to your collection this fall.

Or, you know, as long as you want. Because I heard the rules of 2020 are “wash your hands, wear your mask, and eat pumpkin spice whenever the heck you want.”

I’ll drink eat pumpkin to that!

Can this be made into cupcakes?

I made this for the first time tonight. I had to cook it for at-least 10-12 min. longer than the recipe noted and was not sure if it was cooked enough but hoping it sets and is just moist tomorrow. I am curious- when cooling, i never usually keep it covered curious if this helps keep it moist or if there is another reason to do this step. Thanks!

Baking times will vary from oven to oven. And the reason for keeping it in the pan is to insure the cake doesn’t stick to the pan and fall apart when taking it out.