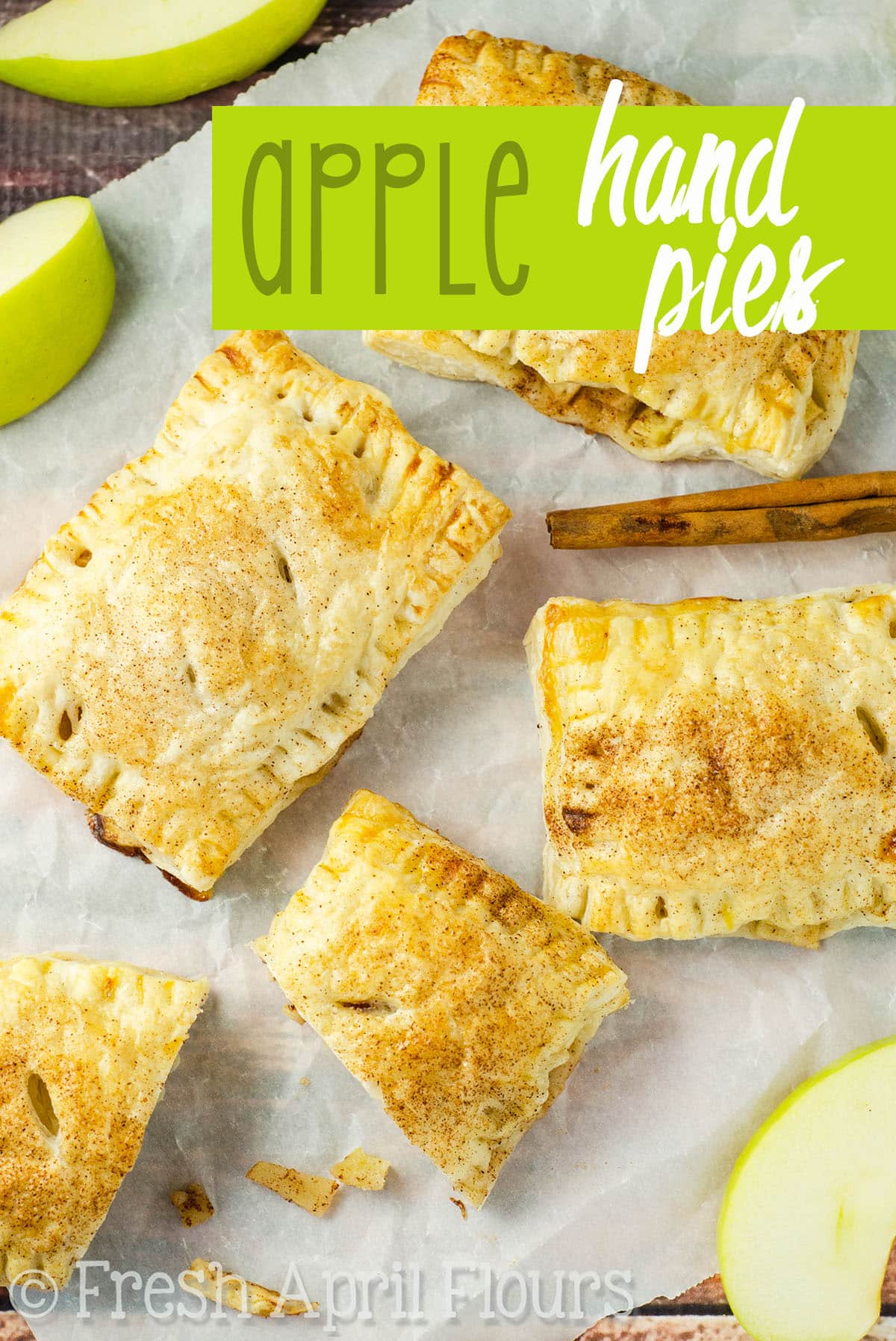 Simple handheld pies filled with spiced apples and made with puff pastry for an easy assembly and even easier eating!

I have a confession on top of a confession: this post was originally published in 2015, and I had prefaced the whole thing by saying that I wasn’t all that into pies.

That I’d rather eat a brownie, or a cookie, or ICE CREAM, but that pies just didn’t really do it for me.

HOWEVER, I have totally come around on pie, thanks to years of my classic pumpkin pie gracing my Thanksgiving dessert plate and discovering that chocolate chip pecan pie was a thing this past holiday baking season.

Previously, pies didn’t quite do it for me, but the more I bake, the more I branch out with what I make, and the more I see what my readers enjoy on my blog, the more I tend to inch a little more toward the “I like pie” side of the dessert spectrum.

So, my FAF friends, this republished/revamped/rephotographed/all dolled up hand pie recipe is here for your apple pie enjoyment, in the form of a portable, simple, handheld dessert made with pre-made puff pastry and a whole slew of perfectly chosen spices.

As I mentioned, this apple hand pies recipe was born on my blog back in 2015. At that time, I made a large batch of them to celebrate the retirement of the (now late) CEO of the company I worked for prior to taking the blog on full time.

His favorite dessert was apple pie, and rather than making pies for 50+ people, I decided that a sort of mini apple pie would be an easier way to get the apple pie job done for a large crowd.

I also wanted something that was easy to store if there were leftovers.

And guess what? I wasn’t expecting to go ga-ga over these apple hand pies, but I totally did. And so did my large group of taste testers!

CHOP AND FLAVOR THE APPLES

Whenever I make these mini apple hand pies, I typically choose 1 large Granny Smith apple and another smaller red apple, like Gala.

We sweeten with brown sugar and season with cinnamon, nutmeg, and cloves. I love cloves, but not everyone does. Reduce or omit if the taste is too strong for you (or if you’re serving to kids– cloves tend to be a little over-powering for them).

USE PUFF PASTRY FOR QUICK AND EASY

The puff pastry makes for super flaky apple hand pies. I love me some homemade pie crust, but nothing flakes quite like puff pastry!

AND, since we’re working with pre-made puff pastry, the hard work is basically done for you.

HOW TO MAKE APPLE HAND PIES

After you prepare your apple chunks, you’ll prepare your pastry shell. Each box of puff pastry contains 2 sheets, which will give you 12 pies (24 rectangles total). Use a pizza cutter to cut your dough into 12 rectangles.

And don’t worry if you forgot to thaw your puff pastry overnight in the fridge: frozen puff pastry will thaw at room temperature in about 45 minutes. Just be sure to refrigerate to firm them back up if you notice they’re took hard to work with.

Next, fill each pie with about 2 Tablespoons of your spiced apple filling, leaving a bit of a margin around the edge for crimping.

Cut the other sheet of puff pastry into 12 more rectangles, pop those babies on top of the filled bottoms, and crimp the edges with a fork.

You’ll likely have some apple chunks fall out or get crimped into the sides of the pie. This is totally ok. And totally encouraged.

Cut a couple slices into the tops of each pie, brush with an egg wash, and sprinkle with more cinnamon + sugar.

HOW TO FREEZE APPLE HAND PIES

Remember how I said I wanted something that could be easily stored if there were leftovers? So simple– just refrigerate, then either microwave as needed or toss in a toaster oven for a few minutes before enjoying. If you want to freeze them, thaw in the refrigerator overnight.

Buttery, flaky, perfectly spiced, and full of natural, sweet/tart apple flavor… These pies are definitely something that should go on your rotating baking list. I promise, they’re much easier than you probably originally thought at first glance.

Plus… No fork necessary! That’s my kind of dessert! 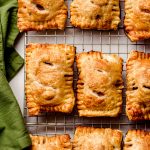 Check out some more of my favorite recipes containing apples!

I’m not a huge pie person either! When it comes to winter desserts is much rather have a crumble! I do love the idea of hand pies though! These would be perfect for Autumn picnics or even summer ones! Delicious!

I’m so glad I’m not alone in the non-pie loving world!

YUM! I’m not surprised in the least that there was not a single one of these left!!! I’m not much of a pie girl myself — I’m obsessed with the filling but unless the crust is just PERFECT, I’m happy to pass it up. But these? Oh my goodness the flaky crust looks to DIE for. I would definitely not be able to be trusted around those hand-sized beauties. Nice work, Lynn (photos are SO gorgeous, too!)

Thanks so much, Leah! I was a fan of this photoshoot 🙂

Yummy! I love apple strudels. Thanks for the recipe, Lynn! 🙂

I just LOVE apple pie, and this seems like the perfect way to have an apple pie… Without all the hard work involved!
I will definitely be trying these out 🙂

I hope you do! Thanks so much for stopping by 🙂

Do you really use only 1 Apple?

Hi, Mrs. Clark! Yes, just one apple. I made a triple batch and used 3 apples. You’re looking for about 1 to 1 and 1/2 cups of finely diced apples.

Thanks Lynn, I think I’ll try them 🙂

I’m obviously a little late to this pie party, but I came across this recipe from Sally’s post about pies today (Sally’s Baking Addiction) and these look so yummy and simple! I’ll need to make these way before fall begins. This is my first time visiting your blog, but you definitely have a new follower 🙂

I’m so glad you stopped by, Christina! You’ve got to try the hand pies– SO much fun to make and serve!

So, I’m wondering….do the apples fully cook in just 20 minutes? I like a softer apple, not crunchy, and it seems like 20 minutes wouldn’t be long enough to fully cook them. These look wonderful though– I love puff pastry as a crust!

Hi Lisa– sorry, I’m just now seeing this comment! If you’d like the apples to be softer, I think it would be perfectly fine to leave them in the oven longer. I might suggest covering the pies with foil to prevent them from browning too much or burning, depending on how much longer you bake them. Let me know how it works out if you try it!