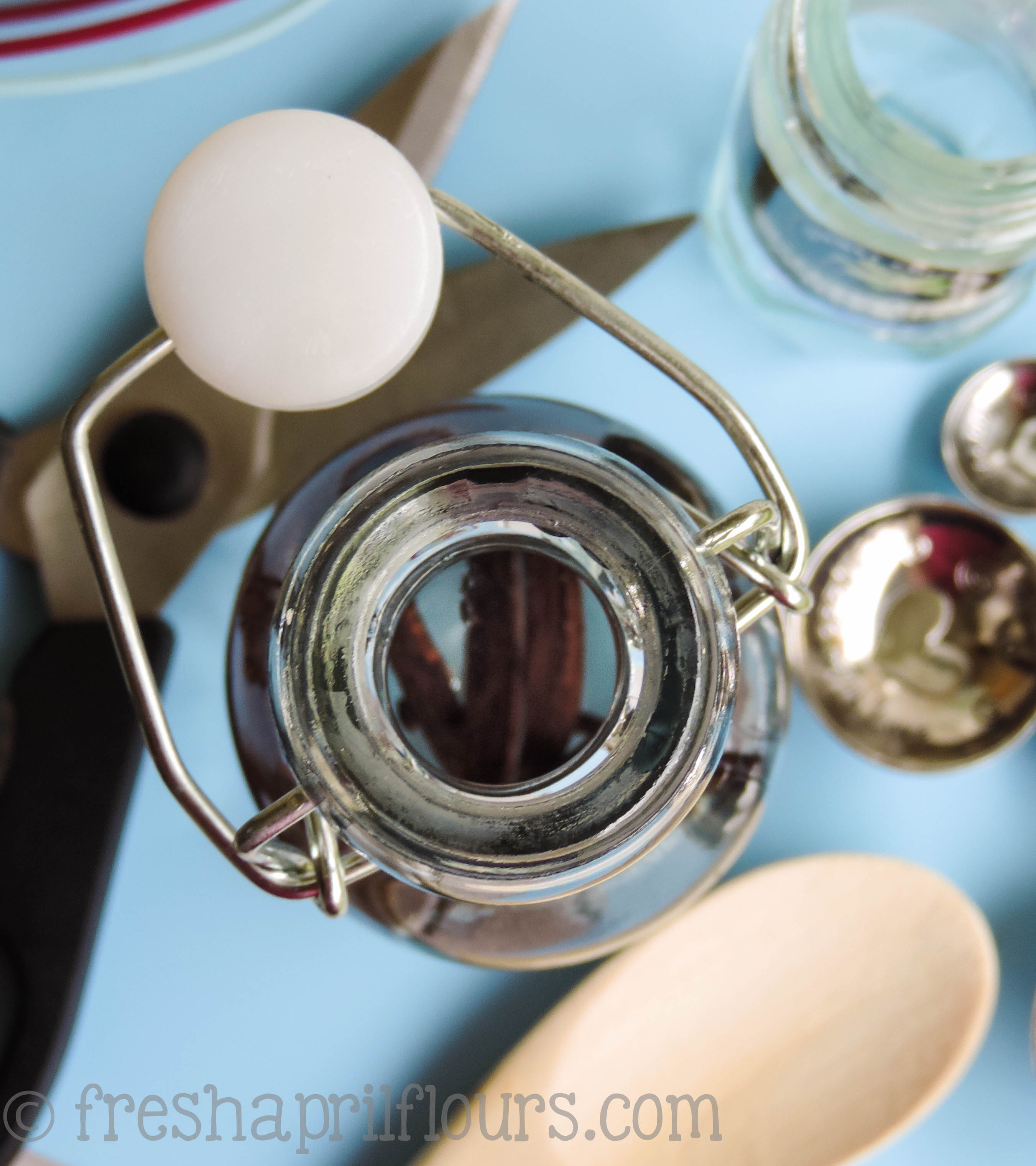 Homemade vanilla extract is so simple. Only 2 ingredients and about 6 weeks of steeping and you’re on your way to your own high-quality flavoring! 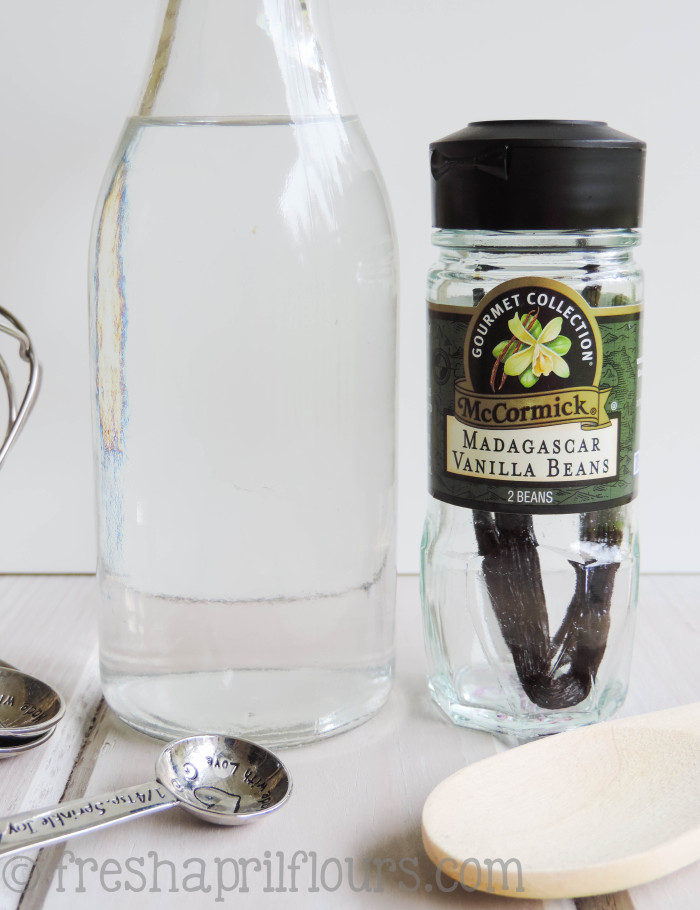 So friends, let’s do this.

I don’t know about you, but in our kitchen, I go through a ton of vanilla extract in a week. It’s a little ridiculous. Vanilla extract is one of those ingredients you see in just about every recipe.

WHAT IS THE PURPOSE OF VANILLA IN A RECIPE?

It’s kind of like salt: it brings out the natural flavors of so many other ingredients, and it’s in a lot more than you think it is. I’ve actually left vanilla extract out of my chocolate cake before, just because I was “curious” what it would taste like…

Take it from me and don’t do that. You need the vanilla notes to bring out the chocolate ones. It’s the yin and yang of the baking world, you might say.

The problem I have with commercial vanilla extract is that it is so.darn.expensive. It comes in a teeny tiny bottle that gets used up after a handful of recipes and chances are, you go to measure out the teaspoon that you need and you only have half of a teaspoon left. Womp womp. The worst!

A few years ago, the mother of a good friend of mine gifted me with a bottle of homemade vanilla extract. It was a HUGE Smirnoff vodka bottle filled with several vanilla beans, and I went through it like that (I totally just snapped my fingers and I hope you did too).

I refilled that bottle a few times over the years, refreshing the alcohol and the beans here and there, but I got lazy and stopped keeping up with it, so I have been buying the little bottles for a couple months now.

What feels like $5,478 later, I realized I didn’t want to force Matt to take out a loan to fuel my baking habits. It was time to start steeping another batch.

So that’s why we’re here. I figured sharing this ridiculously easy and so-much-better-than-store-bought DIY with you would be a great addition to my recipe repertoire. And I timed it perfectly with the holiday season, yes?

You only need 2 things for homemade vanilla extract. Ok, 3 if you include “a bottle” as something you need. Oh, and 6 weeks. Which could be one thing, or 6 things, depending on how you’re looking at this. {{Forgive me, I’m writing this in the middle of a 5 hour flight to Utah, so I’m a little crazy right now (“What time is it?” “Where are we?” “Airplane coffee tastes like hot dirt.”)}} 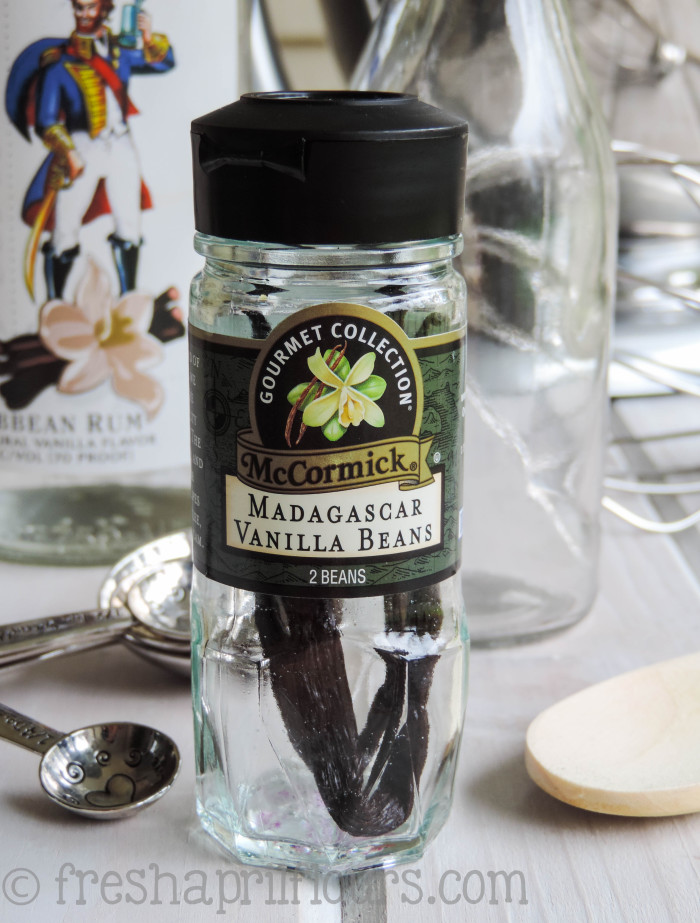 First, duh, you need some vanilla beans. You can get these plenty of places (my favorite place is Amazon), but for this particular batch, I just bought McCormick’s at the grocery store. They were on sale, and I paid $9.99 for 2 of them.

Not bad in a pinch, but not the best deal. Consider the link I provided if you think you’re going to want a larger quantity.

You have several vanilla bean flavors to choose from.

WHAT ARE THE DIFFERENT VARIETIES OF VANILLA BEANS?

My favorite are Madagascar because they produce a rich and creamy flavor (think French vanilla). Others include bourbon, Mexican, Tahitian, Tongan, and Indian (there is also a whole slew of other varieties– read more than you ever wanted/needed to know about them all from King Arthur Flour).

Then there is the decision between grade A and grade B. Both are fine to use. Grade B just aren’t as pretty and are used mainly for extracts.

USE LIQUOR TO STEEP YOUR BEANS

Next, you need some kind of alcohol. My original bottle of vanilla extract was steeped in vodka, but over the years, I have found I prefer my extract steeped in rum. You may also use brandy or bourbon.

Typically, you’ll want to use a neutral flavored alcohol, but I have used vanilla flavored liquor in the past (as I also did in this batch). It does not need to be top shelf. In fact, it’s probably better that you use bottom shelf (hello, Admiral) since any kind of characteristics that make top shelf top shelf (i.e. “it’s smoother”) won’t matter once it’s all vanilla’d up.

Plus, you’re not going to be shooting this, so do some squats and check out that bottom shelf selection. 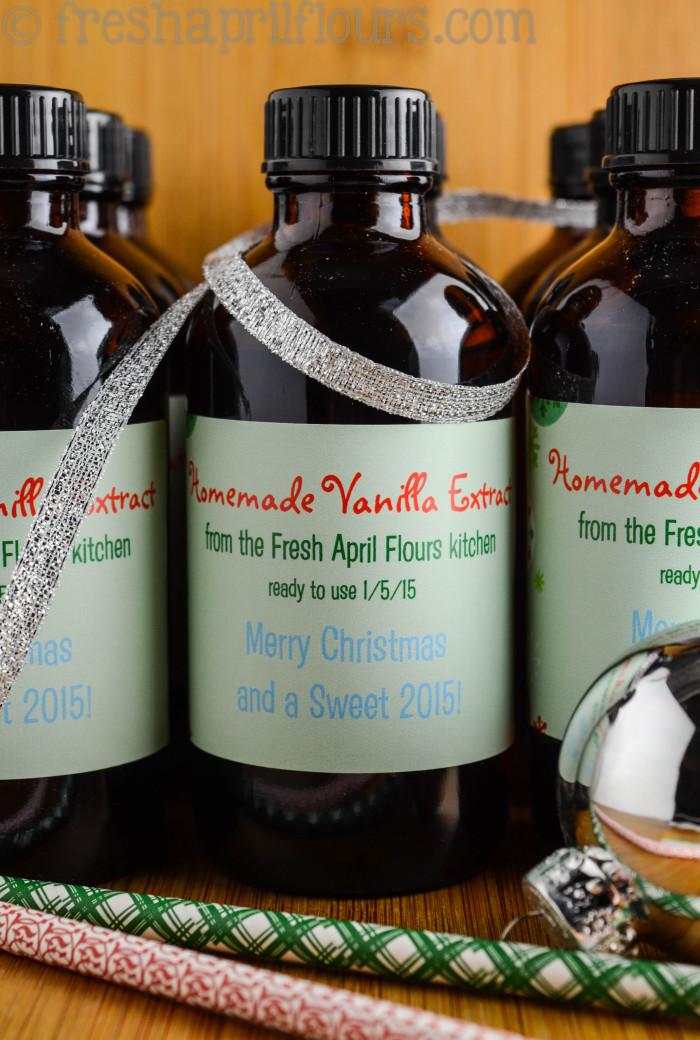 Next, find a bottle with a tight fitting lid. It can be whatever size you want it to be. The bottle I used for this batch holds 6oz perfectly… And do yourself a favor and measure how much liquid your bottle can hold before you start throwing beans and liquor together.

These are the 6oz bottles I used and continue to love years later.

My general rule is about 2-3 beans per 6oz of liquor. I will use 3 if I’m using one of the milder beans.

I have seen some people cut their bean pods linearly, but I prefer just to snip off the ends and then cut them in half, allowing the alcohol to make its way through the entire length of the beans.

Over the course of the 6 weeks, your pods might start to break down and some of the little seedy specks will start coming out.

This is completely fine and what you want to happen. You can always strain your extract once it’s finished if you want a nice, clean look. Personally, I love the little specks! They’re like vanilla freckles in my desserts. 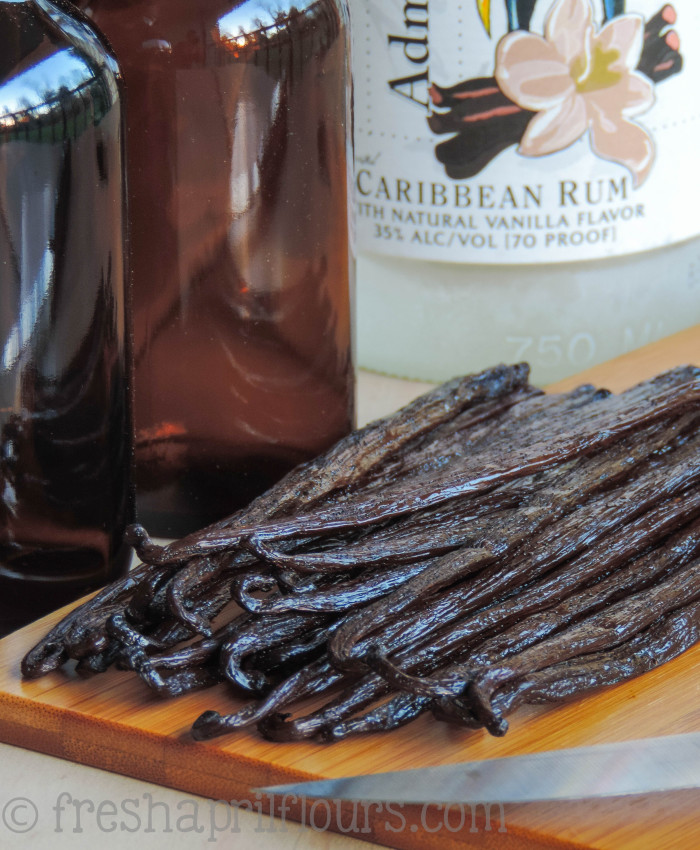 Measure out your alcohol, throw in your beans (I throw in the ends I snipped off as well), and give it a nice shake to get things going. Then… Put it in a cool, dark place and… Wait.

Then wait another week and shake again.

After 6 weeks, your extract is ready to use, and it only gets better and better as it steeps longer. You just want to make sure it stays in that cool, dark place so that it doesn’t spoil. If you have an amber bottle, you might want to keep it in that.

I find that homemade vanilla extract really takes my desserts to a whole new level. First of all, there’s just something that tastes better about homemade desserts to begin with, but when you throw homemade extract into the mix, we’re talking a whole different ball game.

Plus, it’s your own little blend! That puts true meaning to “personal touch” when it comes to the love-labor of a homemade dessert.

I hope that you’ll consider making your own extract at home! The sooner you start, the closer you are to the best vanilla extract your tastebuds have ever tasted. Also… Those adorable vanilla freckles! 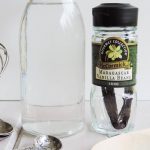 Homemade vanilla extract is so simple. Only 2 ingredients and about 6 weeks of steeping and you're on your way to your own high-quality flavoring!
Servings: 8 ounces

Over the course of the 6 weeks, this is what happens inside that bottle!