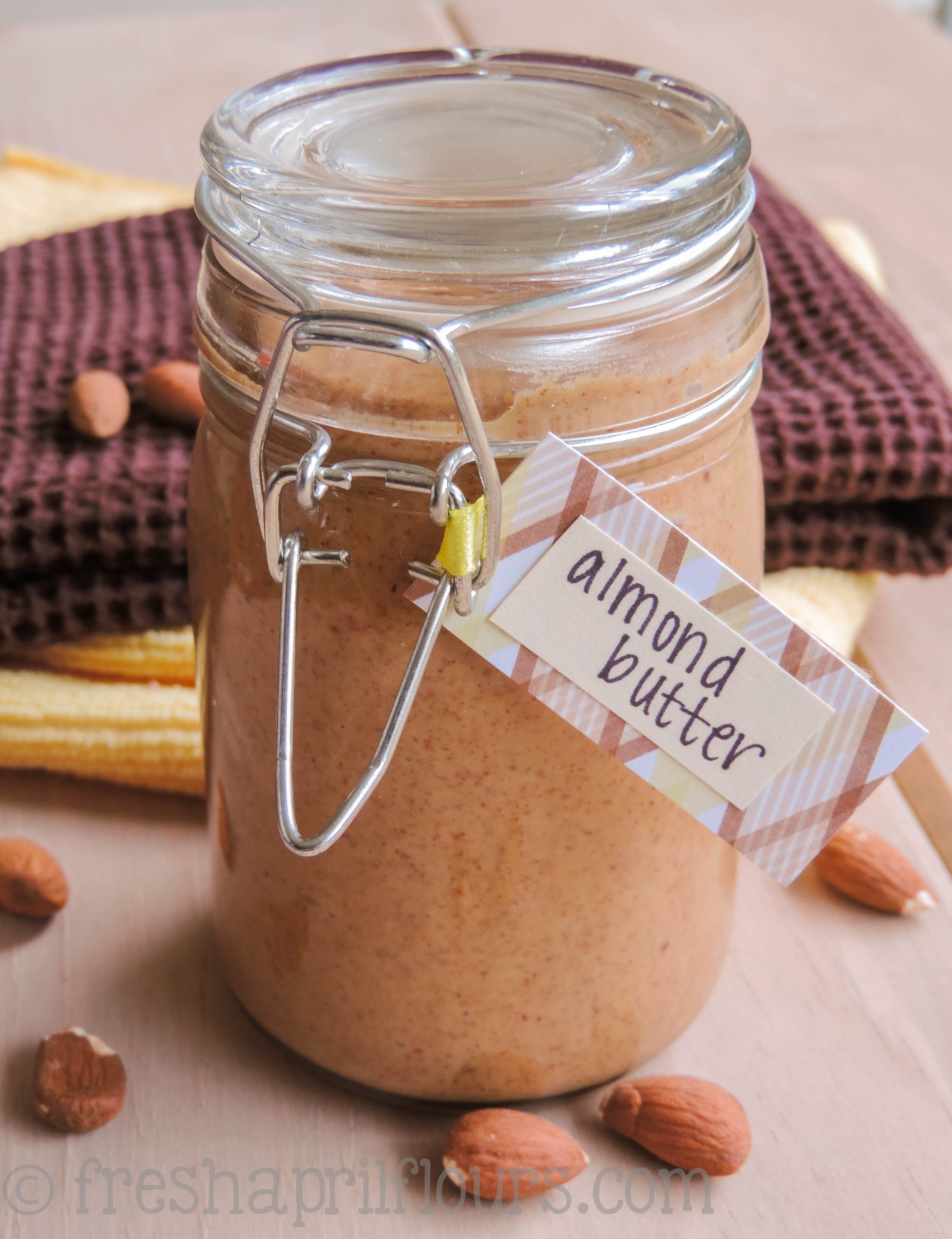 Making almond butter at home is much easier than you think. Never spend $11 on a jar again! 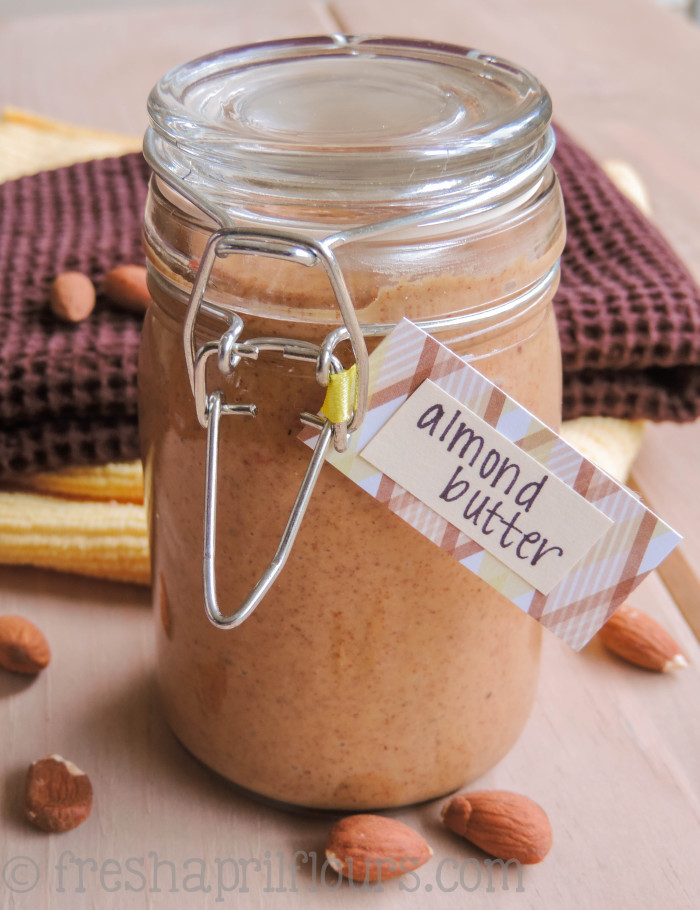 We make this at home often, so I decided to update photos, some of the text, and a little of the recipe in September 2014.

If you haven’t tried almond butter, you’re really missing out. It’s just as good as peanut butter in taste (while obviously tasting different), and better for you nutritionally as it has less saturated fat, less carbs, vitamin E, and more fiber.

Unfortunately, it’s so expensive. We’ve never purchased a jar, just the small servings made by Justin’s, and even those aren’t cheap, even on sale. Out of curiosity last week when I was at the grocery store, I stopped in the organic aisle to see how much a jar of it was going for… And had to pull my eyeballs back into my head.

So, I decided I wanted to try making almond butter at home. I knew I could get almonds in bulk for much less than $10.99/lb, so I did a little research on exactly how to make almond butter.

I knew homemade peanut butter was as simple as putting peanuts in a food processor, but I never realized it was just as simple with almonds. So I stopped at the grocery store on my way home from work, picked up 1lb of almonds for $7.99, and was eating homemade almond butter within 15 minutes of being home.

I sent out a SnapChat (because otherwise it didn’t really happen, right?), and I had so many people over the course of the weekend texting me or asking me when they saw me about my kitchen adventure. The conversation went mostly like this, every. single. time…

Really, people. If you have a food processor, or a Ninja, or something of the like… This is in your realm of capabilities.

Ok, I lied a little bit. You need a few things: almonds, a food processor (this

is ours), patience, and trust (in me that I’m not lying to you again and that this will eventually become almond butter).

Since I make this so often, I’ve come to the conclusion that no two packages of almonds are alike. I’ve made this using raw almonds, roasted unsalted, roasted salted, and honey roasted.

I can’t say that one type is faster than another, but I can say with confidence that the speed at which this comes together depends completely on a combination of what type of food processor or blending machine you’re using and the type/size of almonds you’ve chosen.

That being said, please know this can take anywhere from 5 minutes to 25 minutes. Regardless of the length of time, the steps look the same (and you’ll find photos of the steps below).

For the batch that I photographed in the numbered steps photos, I used raw almonds. I often just use plain almonds and drizzle honey in (about 2 and 1/2 teaspoons).

The title of this recipe is simply because that’s what I’ve provided here. Feel free to use whatever kind of nut combination you want. Also, I know almonds come in all kinds of flavors these days, and this “recipe” is just as good with any kind of almonds you choose. Be adventurous!

I like Trader Joe’s or Wegman’s for my almonds. I can usually get them for $5-7 per pound. That’s great! 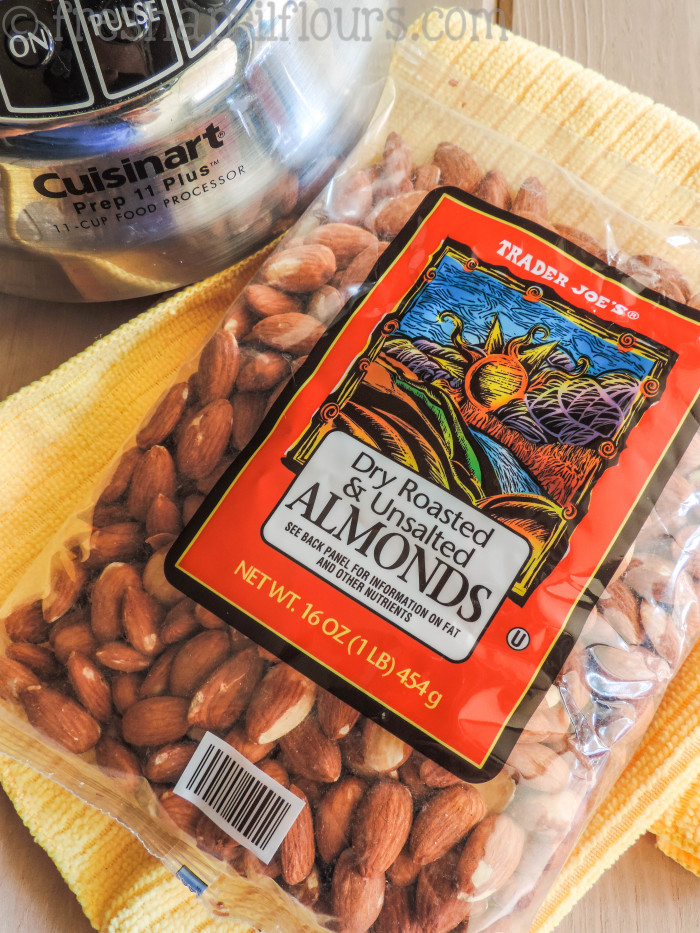 You’ll want to start with whatever fits nicely in your food processor or blender. I used 1 pound. Use your best judgement here, and don’t pack your bowl with too many almonds. Not only will it take longer, but you might jam up your blade. 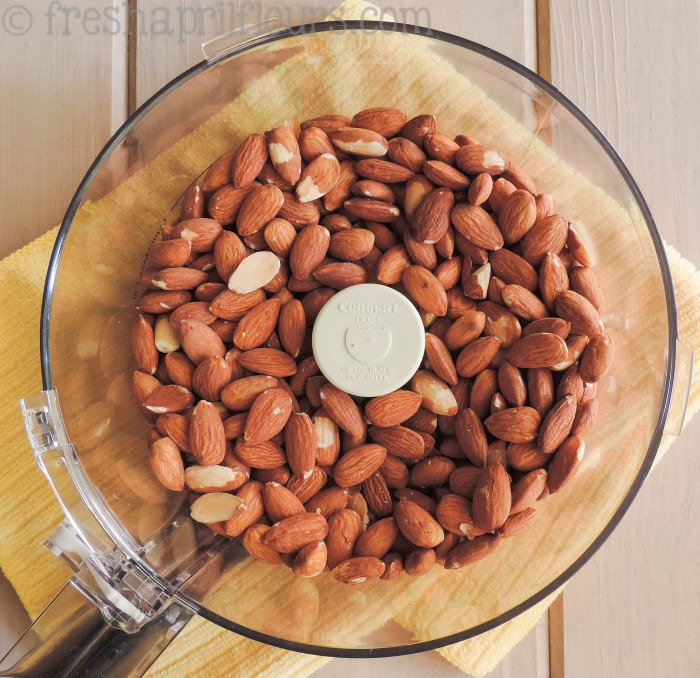 This is where I occasionally add about 2 ounces of honey roasted peanuts. If I’m using honey instead, I typically wait until the almonds are ground up a bit. Add as many or as few peanuts as you want. Luckily for you, if you decide you want more honey roasted taste near the end, you can add more peanuts easily. As stated above, I often just drizzle honey in as the almonds process.

Put the lid on and get to work!

In the first few minutes, you’ll end up with a pretty dry mixture of very fine almonds (PHOTO 1).

Keep processing, and you’ll start to see the mixture getting a little moist and starting to clump up. This is a good sign! The oils in the almonds are releasing. You’ll want to make sure you stop periodically and scrape down the sides of the bowl (PHOTO 2).

The next thing you’ll observe is that it appears to be doing nothing. Just kind of flinging bits all over the place. You’ll start to wonder “did Lynn lie to me? Is this a joke?” It’s not. Remember the trust? Pull it out of your back pocket now.

After a few more minutes, the sound of your processor will change. A large ball of almond “meat” will be swirling around and around and around… And around (PHOTO 3). You’ll wonder if your food processor is going to live through this… It will! I promise. Don’t forget to keep scraping!

Eventually, this ball will gather a ton more moisture. It will start to glisten and it will start getting warm (PHOTO 4). You’ll start thinking “wow, this is getting somewhere!”

Unfortunately, this is far from true. This is the step I found I could walk away from for a little bit, so I , , did some dishes so I wasn’t far away from the action.

It was a good 10 minutes before I opened up the lid and saw a glorious sight (PHOTO 5).

By all means, stop here if you like the texture. For me, it was still a little gritty (interestingly enough, I’m a crunchy peanut butter gal through and through), so I kept going until my spatula could smooth the almond butter around easily (PHOTO 6).

Ahh, yes. There it is. The perfect texture! Shiny, oily, and so incredibly aromatic. And steam came out of the bowl when I lifted the lid! Done for sure. 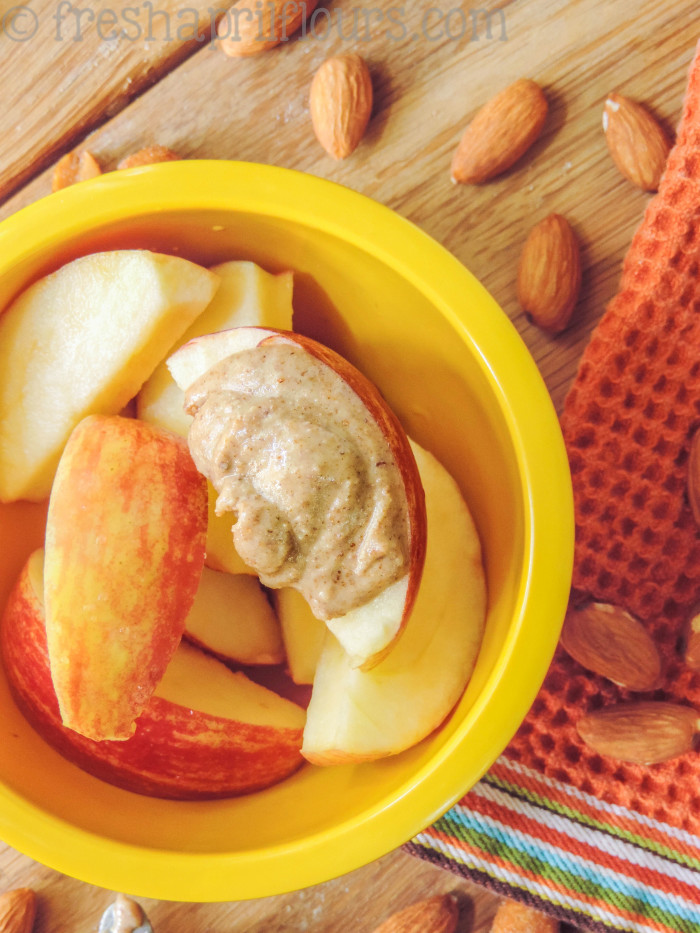 All in all, this was about a 20 minute process with very little hands on time (but like I said, sometimes it takes much less). So worth it if you don’t feel like spending an arm and a leg on a jar.

Plus, you get to control just about everything here. The taste, the texture, the ingredients… And that is worth so much more! Homemade things taste better because of the love.

So, oh yeah, add “love” up there in the list of all those other things I said you would need that were not almonds or a food processor.

In smoothies, on apples, on graham crackers, in a recipe, on a spoon, on your fingers… Enjoy any way you would normally enjoy peanut butter. Thank me later. 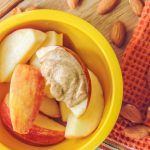 Making almond butter at home is much easier than you think. Never spend $11 on a jar again!
Prevent your screen from going dark
Recipe Author Lynn April
Servings: 1 pound

I need to tell my parents about this! They started the paleo diet and are constantly buying almond butter – so expensive! thanks for the great recipe 🙂

Hey Brit! You’re so welcome! We follow bits and pieces of paleo (strict is SO HARD) and this is one of the things we’ve been most excited about. I hope they like it!

I’m a newbie with almond butter but I love it! This looks super easy, who knew! I love your pictures!

It is SO EASY! I hope you’ll try it! Thanks for stopping by 🙂