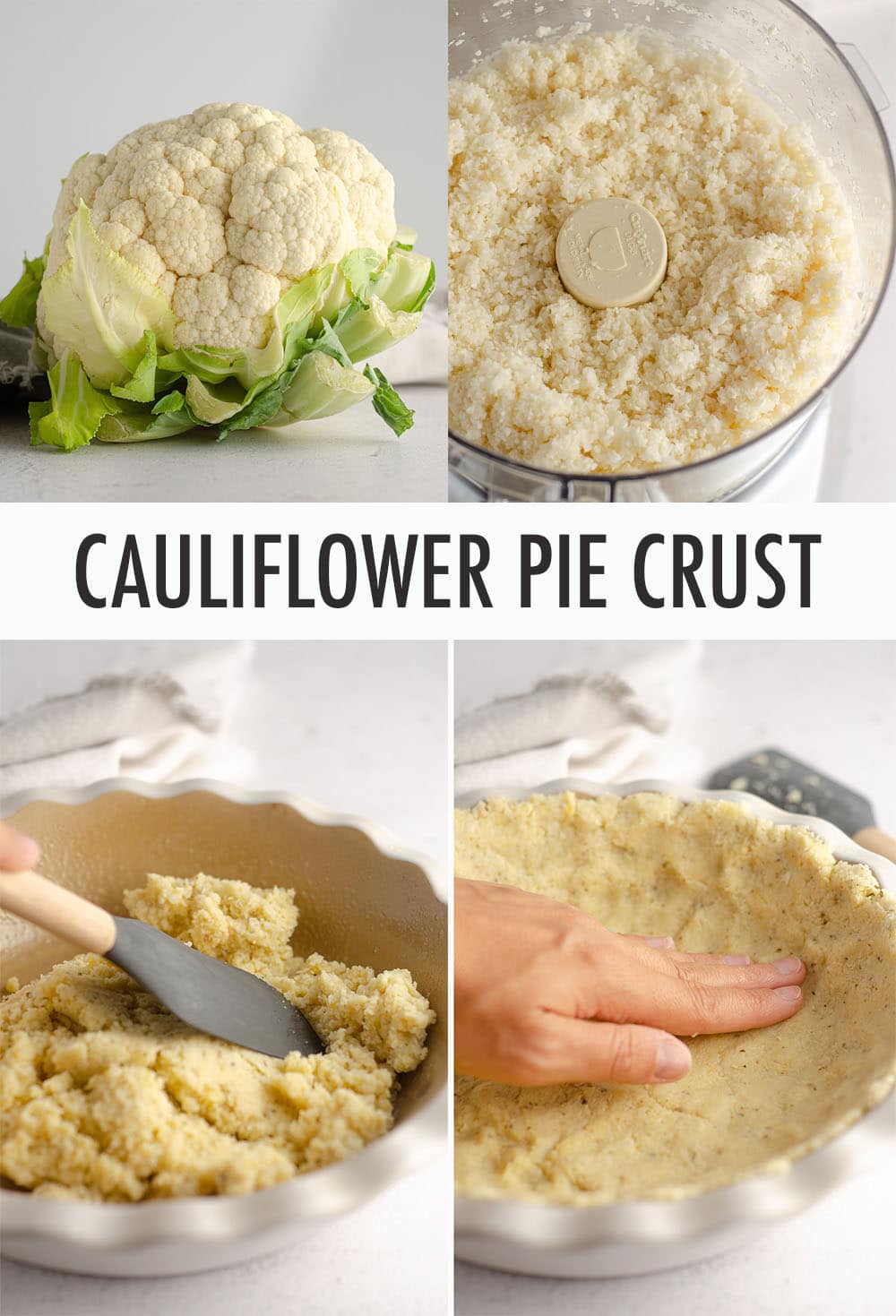 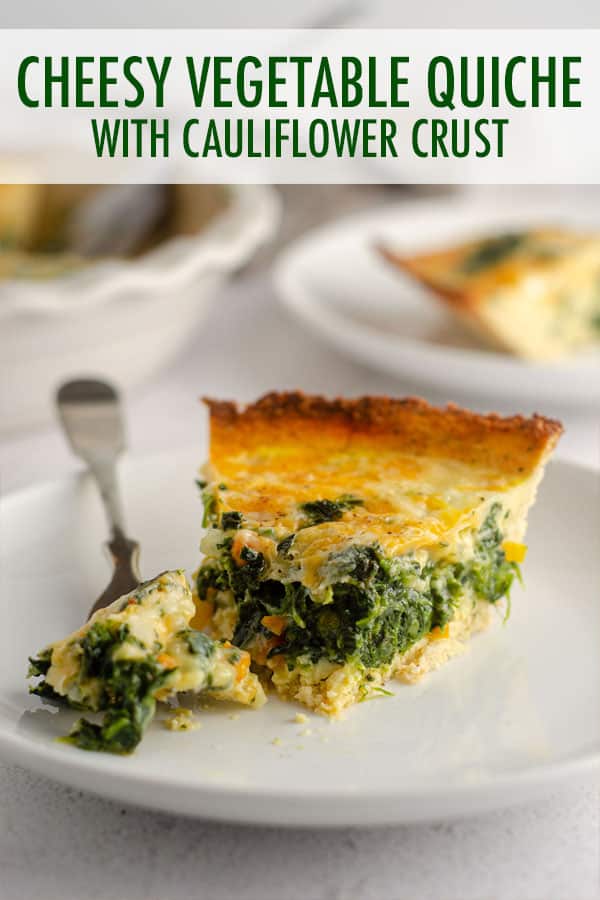 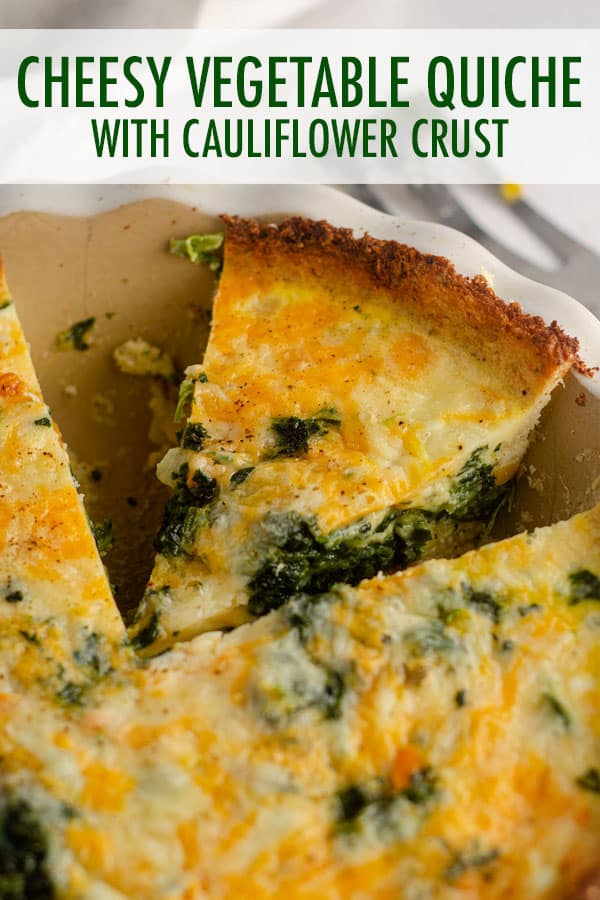 Many years ago, I was dying to try out this cauliflower pizza crust I had seen all over the place.

Being a baker, my brain constantly thinks in recipes– my bookmarks, notes in my phone, and scribbles in the margins of my planner are filled to the brim with recipe titles and ideas (real life Pinterest, over here).

My brain is also constantly thinking in indoor cycling songs and workout playlists, but that’s a completely different problem I have.

While pizza toppings never quite made it onto my cauliflower pizza crust, turning that crust into the bottom layer of a quiche turned out to be one of the best blogging decisions I ever made.

In fact, just 2 months after I originally published this post, Huffington Post picked it up and plopped it into a roundup of recipes using cauliflower in unconventional ways.

Needless to say, this post has gotten so much traffic over the years from that post, so, in turn, it has received some pretty great reviews from folks who have made it.

I thought that six years later was a good time to finally update the post with fresh photos and an updated, clearer set of instructions.

I have written before that I adore savory breakfast.

Give me sausage, egg, and cheese on a biscuit or an everything bagel, you can keep your pastries and French toast (except these sourdough cinnamon rolls can stay… Mmmkay?).

If you aren’t interested in the cauliflower crust, you may certainly bake this in a store bought pie crust, my favorite homemade pie crust, or go with one of my tried and true methods and leave it crustless.

Just skip the part about the crust and head over to the guts and glory, but if I were you, I would give this a try.

It really surprised me, not only that it was fairly easy to make, but that it gave a really good flavor and texture to the quiche overall.

WHAT YOU NEED FOR A GREAT CAULIFLOWER CRUST

Good news– you need all of that (minus the cauliflower) for the quiche, so you might as well go all out and try something new.

You’re going to cut up your cauliflower, removing all of the stems and working with just the florets, and pulse all of it in your food processor (this is the food processor we own and love) until it resembles cornmeal.

After processing, you should have about 2 cups of “cauli-flour” (I crack myself up).

Throw this mixture into a microwave safe container, and cook it in the microwave for 5 minutes (no need to add water).

After it’s done cooking, try to get over the fact that it smells like you-know-what, and let it cool for at least 10 minutes.

Trust me, you don’t want to leave this part out, because the next step involves squeezing out all of the excess water, and you don’t want hot lava pouring down your hands and arms (not that I know this from experience, I am super patient and always wait the entire 10 minutes before I start squeezing…).

While you’re waiting for the cauliflower to cool, blend your cheese, egg, and spices, and maybe start chopping up the vegetables for the quiche filling.

SQUEEZE OUT ALL THE MOISTURE

Once your cauliflower is cool, ball it up in a strong kitchen towel and squeeze like you’ve never squeezed before. There will be a ton of water in that bad boy… Seriously, a ton.

And when you think you’re finally done squeezing, squeeze some more, because you’re not. You want absolutely zero liquid left in your cauliflower crust.

Once it’s all dried up, throw it in with your egg mixture and get your hands in there (or a spatula) to mix it all together. From there, you can sort of flatten it and put it right into your pie dish, spreading it out evenly like you would a pie crust.

Once it’s all in, bake it for about 15-20 minutes, or until the edges brown and the overall color is browning as well.

While my crust baked, I started to sauté my vegetables (seasoned with a pinch of salt and pepper).

For this recipe, I used frozen chopped spinach. I went this route because
1) it’s easier than sweating down a bunch of spinach
2) it’s already chopped and
3) it comes in a 10oz block which was the perfect amount I needed for my quiche.

Just make sure that once your spinach is defrosted, you squeeze out the water just like you did with your cauliflower (again, make sure it’s cool enough for you to do so if you thawed it in the microwave).

After all of the vegetables are cooked, it’s time to whip up the simple spinach and vegetable mixture, layer it in the bottom of the baked cauliflower pie crust, and sprinkle the cheese right on top of that layer.

For my cheese, I like to shred my own off the block and use a creamy blend of sharp cheddar and Monterey Jack.

The eggs, milk, salt, and pepper get whisked together in a bowl and then evenly poured on top of the cheese mixture.

Although we typically dig right in once it’s finished baking, we find the best taste to be after it has settled a bit in the fridge. The flavors marinate together better and, surprisingly, the crust gets crustier.

PERFECT FOR ANY MEAL

This quiche is the perfect breakfast, although if we’re being honest, we have had it for lunch AND dinner. So it never lasts long in our house!

The quiche itself is perfectly cheesy, speckled with sweet vegetables, and blends nicely with the boldly seasoned cauliflower crust (which taste-testers can usually tell is different, but aren’t exactly sure in what way, and still delicious).

Change up your vegetables, play around with your cheeses, but certainly do not be intimidated by this “crust.” It might surprise you and your next breakfast guests!

If you’re interested in any other recipes that would go nicely with this low carb crust for quiche, check out any of the following quiche recipes on my blog:
•crustless mushroom & tarragon quiche
•asparagus quiche
•crustless caprese quiche

BONUS: this is actually a keto cauliflower pie crust, so if you’re looking for one of those, BINGO!

Plus, it’s lasted the test of time here at FAF. And I don’t think it’s going anywhere any time soon!

Want to continue getting your veggie fix? Try my veggie nuggets (perfect for kids) or zesty cucumber salad next. 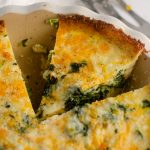 You may certainly leave this quiche crustless or consider making your own traditional crust!
Did you make this recipe?Mention @freshaprilflours on Instagram or tag #freshaprilflours!

Need some sweet go to with your savory? Try Cinnamon Chip Scones with your quiche!

Delicious!! Thank you! I’m beyond impressed that you had this recipe before Cauliflower crust was a thing, Lynn! Healthy, and so tasty. I’d been making Frittatas for years so only wish I’d found this before! Thanks for all the tips and helpful info too. I used Coconut Milk instead and turned out delicious!

Thanks so much, Laura! This is on my list to redo, rephotograph, and republish with updated info for later this summer. It’s one of my most popular posts– can’t believe I got in while cauliflower crust was still on the rise, hahaha.

Taste is a 5, but this is super labor, tool and time intensive, IMO. Lots of bowls, a frying pan, strainer, towel…I feel like my kitchen was full of utensils and equipment when I was done. Not to mention itty bitty cauliflower pieces. It had good flavor, but after all that work I think I’d probably try another recipe in the future. Thank you for sharing though and I look forward to trying more of your recipes!

Fair assessment– crustless is way less work! This is for those who want a crust but don’t want to use a traditional pie crust. I’m glad you liked it though!

My next suggestion would be a blender, but if you don’t have that either, my best suggestion would be to chop up the cauliflower as tiny as possible and cook a couple more minutes than suggested to soften. Then chop again. You’ll probably be able to get the florets pretty tiny that way, though I can’t guarantee anything. Good luck and keep me posted!

Hey Lynn – this recipe is amazing! I made it for my mum who follows a keto diet, but we all loved it! And the leftovers were just as good as the first round. The only sub I made was whipping cream for the milk as that was all we had in the house (and threw in some bacon because … well … everything is better with bacon right) and it was fantastic! In fact, it reminded me of a cheese and onion tart I used to eat in a little French restaurant in London so … I’ve just made it again replacing all the veg with beautifully softened almost caramelised onions. Can’t wait to try it out.

That sounds amazing, Jeff! Thank you so much for your glowing review!