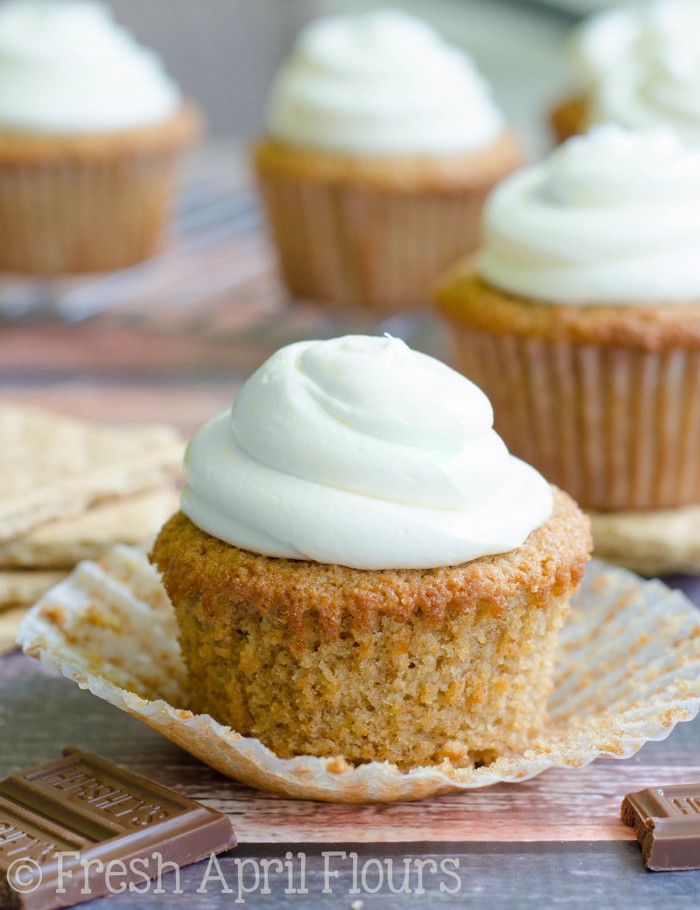 So I mentioned a couple weeks ago, when I brought you this irresistible s’mores fudge, that I had a couple more s’more (a couple s’more?!) recipes up my sleeve– one that fell apart and another I had run out of time for.

And OHHH BOY, was I ever right. 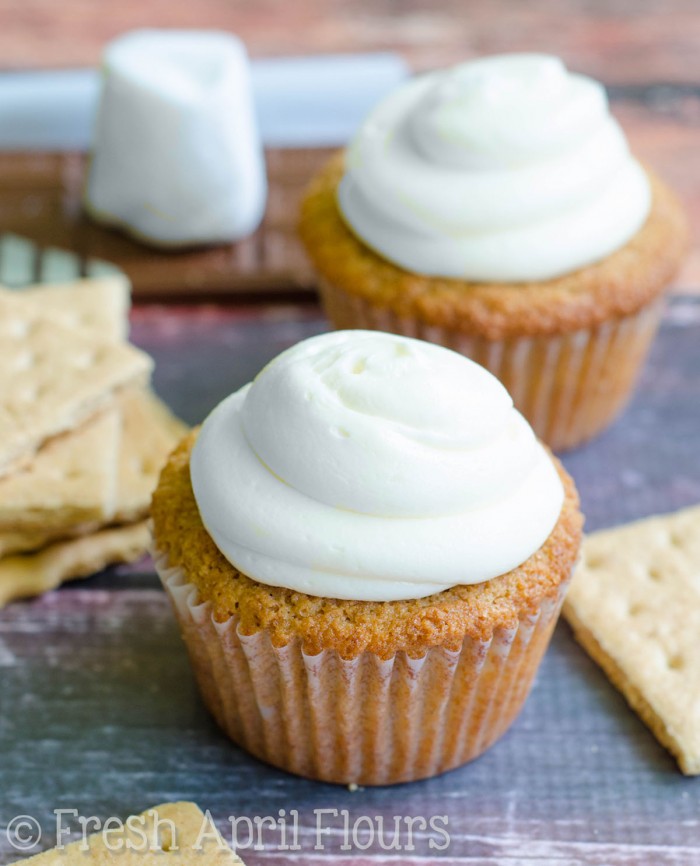 I had been thinking about these cupcakes for awhile, and I played through many different options as far as where to place each flavor in my cupcakes.

Did I want a chocolate base with hints of graham cracker and loads of marshmallow?

Did I want MORE marshmallow than anything else and a side of chocolate and graham?

I could not decide (#foodbloggerproblems) until a friend/reader/fan of mine had the most wonderful suggestion on the planet: make it all about the graham.

Allison, you are my dessert hero.

When it comes to a s’more, I am ALL IN on the graham cracker. It is the foundation for all of the other ingredients that get jammed into that toasty little treat– anywhere from peanut butter to Reese’s to big marshmallows, little ones, jumbo ones, dark chocolate, white chocolate– the combinations are endless.

But one thing stays constant… The tried and true graham cracker.

It was decided. I needed to make a graham cracker cupcake, and I’ll tell you what: BEST DECISION EVER.

Same deal with these cupcakes, although if all you have is all-purpose, that will work just as well.

The cupcake batter is pretty standard, and once it’s in cupcake liners, you of course need to equip each one with a melty chocolate center. A Hershey’s bar broken into pieces gets the job done, but you’re welcome to use chocolate chips, a Hershey’s Kiss, or any other small chocolate piece you might enjoy with your s’more.

Two rectangles get pushed right into the center of each cupcake. They will stick out a bit, but this is totally fine. The cupcake batter will bake around it, kind of like a graham cracker hug. 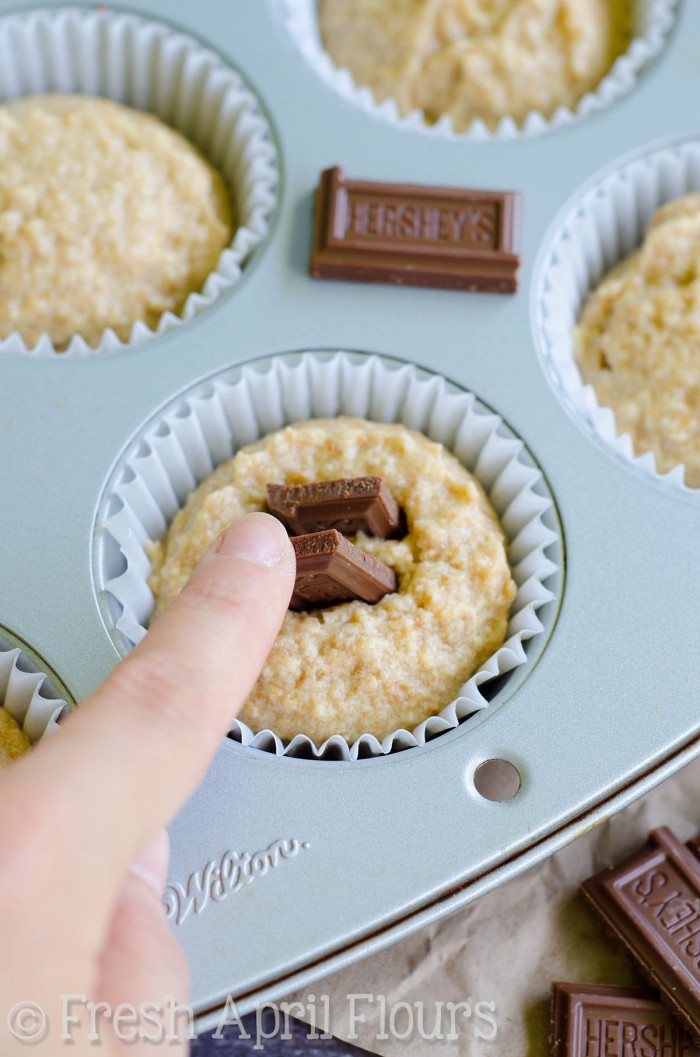 I will say this… Once your cupcakes are in the oven, it will look like they are going to overflow, but FEAR NOT! There is just enough flour + leavener in these cupcakes to make them rise a whole lot in the beginning and then stop. Plus, the batter is thick, so the cupcake domes almost form a shell as they rise.

Since you can’t exactly stick a toothpick in the center to check for doneness, go mostly by sight. The edges of the top of the cupcakes should start to brown. Toasty, toasty graham crackers! Oh, and the smell? AAAAMAZING. 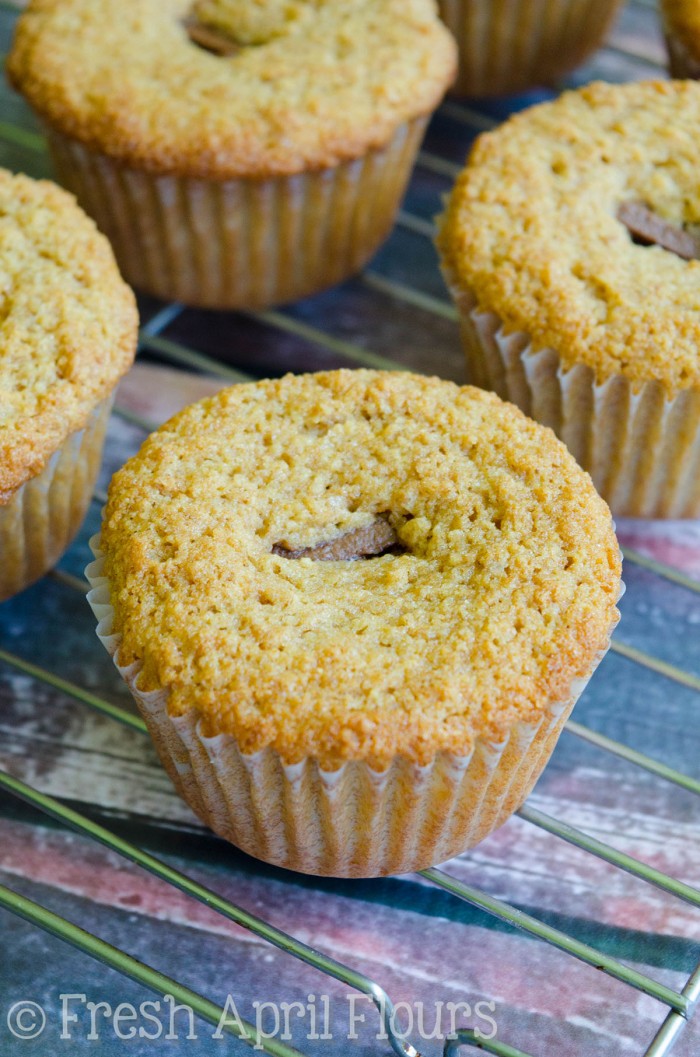 While the cupcakes cool, it’s time to tackle this marshmallow butterdream, I mean buttercream. It’s made of butter, marshmallow creme/fluff, powdered sugar, unicorns, rainbows, butterflies, err… What I’m trying to say is… This stuff is dangerously good.

It’s fluffy and it’s dreamy and you will think about it long after it’s gone, I assure you. A nice puffy cloud of the good stuff goes right on top of each cupcake.

My taste testers loved these cupcakes, and they made a great suggestion: tossing some more crushed graham cracker on top of the marshmallow frosting for the added crunch factor. UMMM, why didn’t I think of that? With or without the extra grahams, I think you’ll find these cupcakes to be a winner.

The chocolate in the center, of course, graces each bite that is topped off with luscious marshmallow buttercream which completely melts in your mouth. A triple threat dessert– my total fave. 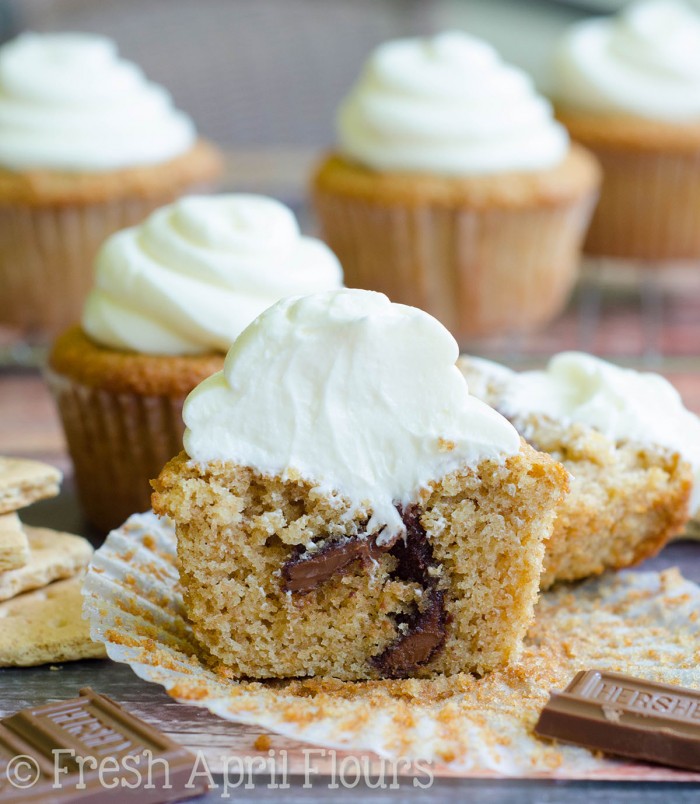 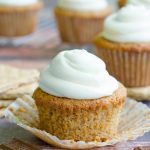