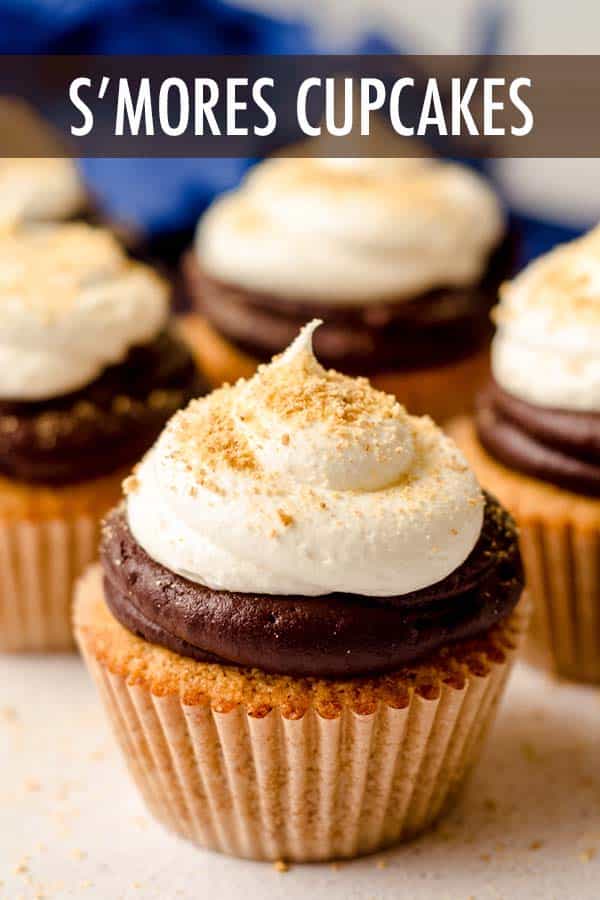 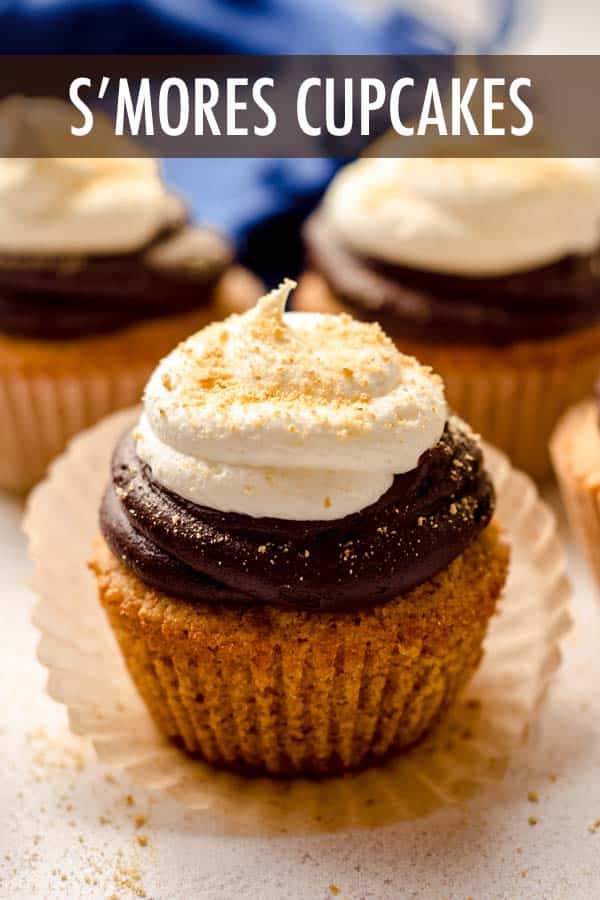 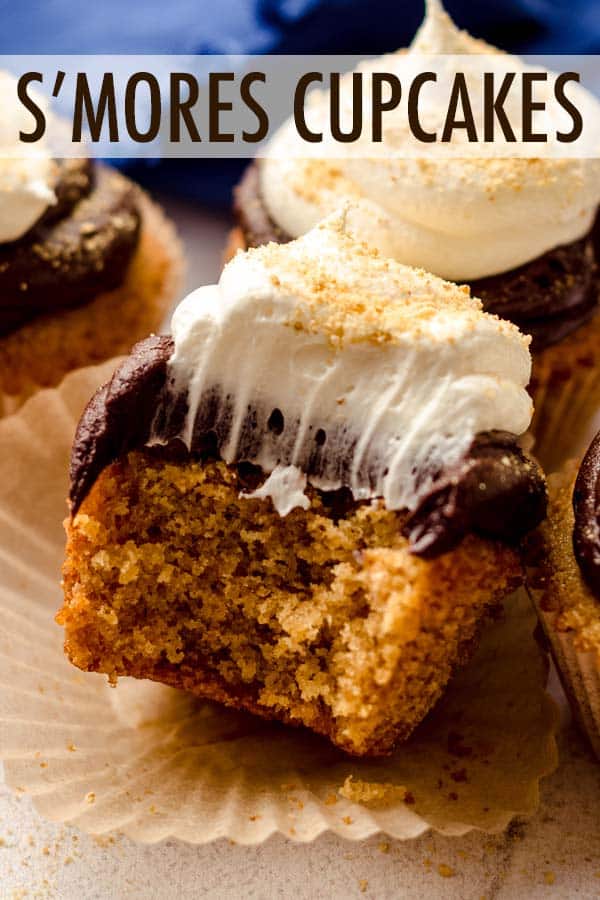 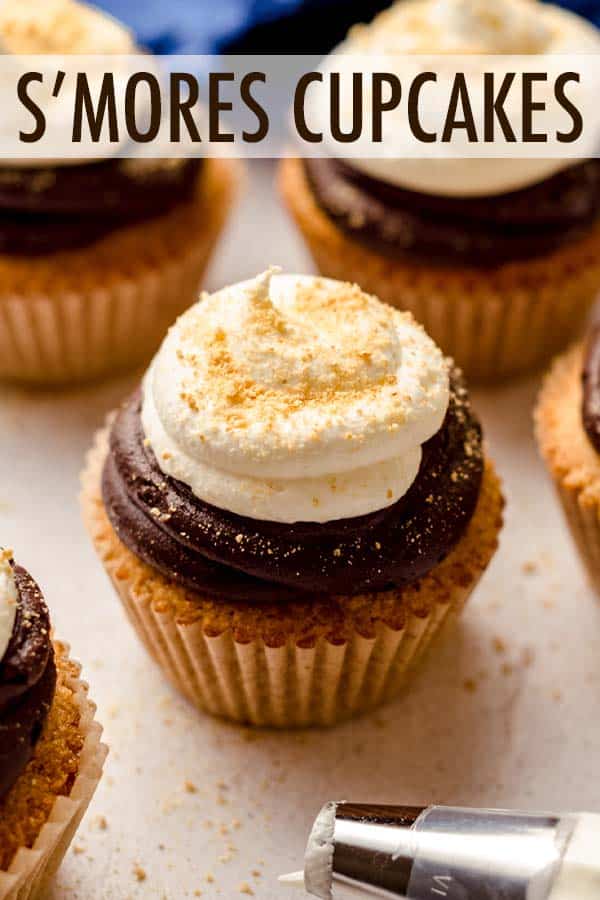 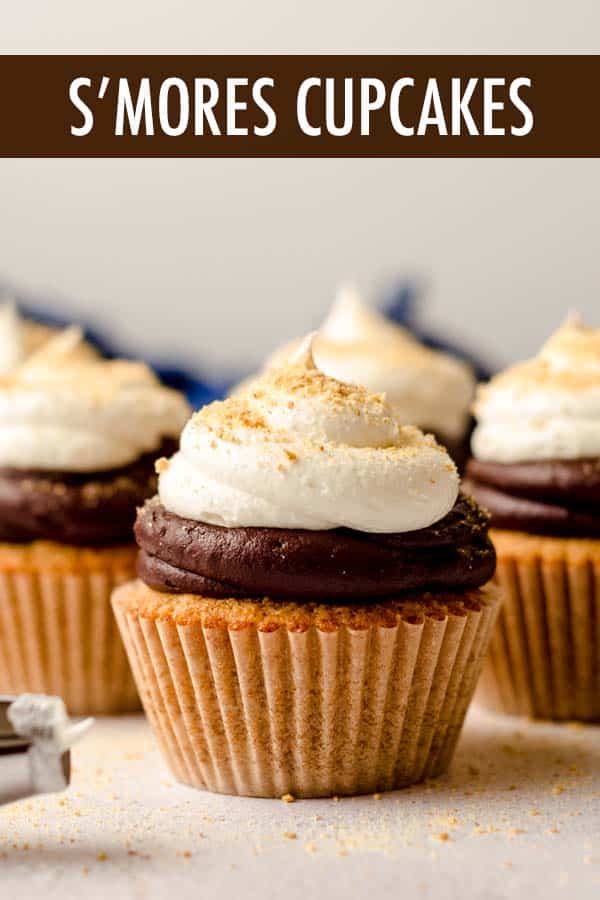 These s’mores cupcakes have lived on my blog since 2015. The idea for them was born when I reached out to my Instagram followers about which part of the s’more they thought was the most important.

I had many folks say that the marshmallow was the best part, but then I had a handful say that the graham cracker was the key, with its coarse and crunchy texture being the perfect complement to melted chocolate and toasty marshmallow.

See all of my s’mores recipes!

Personally, when it comes to a s’more, I am ALL IN on the graham cracker. It is the foundation for all of the other ingredients that get jammed into that toasty little treat– anywhere from peanut butter to Reese’s cups to big marshmallows, little ones, jumbo ones, dark chocolate, white chocolate– the combinations are truly endless.

But one thing stays constant: the tried and true graham cracker.

It was decided right then and there– I needed to make a graham cracker cupcake, and I’ll tell you what: BEST DECISION EVER.

START WITH A GRAHAM CRACKER CUPCAKE

If all you have is all-purpose flour, that will work just as well. There is plenty of whole wheat flour that already exists in graham crackers and graham cracker crumbs to fit the texture bill.

The cupcake batter is pretty standard as far as ingredients, but the texture is unlike any you probably work with on a regular basis.

This graham cracker cupcake batter is coarse and sticky, and it isn’t very viscous. I always use an ice cream scoop with a trigger to scoop my cupcake batter, and this batter holds its shape pretty firmly even when it’s in the cupcake pan.

The end result is a coarse, textured crumb that is also soft and buttery. It sounds impossible, but trust me, it is very possible and very real for those qualities to coexist. Especially if you are a texture lover, you will really enjoy the base of these s’mores cupcakes. Craggy

Over the years, these cupcakes have gotten many positive reviews, but I personally was never totally in love with them. They were originally filled with mini chocolate bars, which didn’t quite add enough chocolate for me.

I went back and forth with exactly what to do with revamping this s’mores cupcake recipe, but ultimately, I decided not to fill the graham cracker cupcakes with anything in order to keep the chocolate to marshmallow ratio solidly in the “equal” camp.

This chocolate buttercream is one that you find in other spots my blog, originally coming to life on my yellow layer cake and also gracing my chocolate layer cake.

It’s creamy, it’s chocolatey, and it makes the perfect foundation for a fluffy marshmallow buttercream swirl.

This marshmallow butterdream, I mean buttercream, is what dreams are made of. It consists of butter, marshmallow creme/fluff, powdered sugar, unicorns, rainbows, butterflies, err… What I’m trying to say is… This stuff is dangerously good.

It’s fluffy and it’s dreamy and you will think about it long after it’s gone, I assure you. A nice puffy cloud of the good stuff goes right on top of that chocolate buttercream base.

HOW TO MAKE S’MORES CUPCAKES

When your graham cracker cupcakes are cooled, your chocolate buttercream and marshmallow buttercream are ready, it’s time to assemble.

This is simple: pipe some chocolate buttercream on top of the cupcakes, either keeping it flat with your piping method or, doing what I did and flatten each mound slightly with a small spatula. You just want to make sure it’s flat so that the marshmallow buttercream can go on top.

Swirl that marshmallow buttercream into a gorgeous little mound right on top of the chocolate foundation, and you’re all set!

My original taste testers loved these cupcakes, and they made a great suggestion: tossing some more crushed graham cracker on top of the marshmallow frosting for the added crunch factor. I hadn’t done that the first time around (why?!), but decided to this time. YES. Do that. Extra crunch on top is chef’s kiss awesome.

The chocolate and marshmallow on the top grace each bite with equal parts of that triple threat that makes s’mores so irresistible. We aren’t missing out on any parts in this completely revamped s’mores cupakes recipe, and I am much happier with this end result than I had been previously.

I hope that if you’ve been here before and tried (and loved!) the old recipe, you’ll consider trying this new and improved recipe. To me, these are s’mores perfection, and they’re exactly what I wanted them to be this time around. 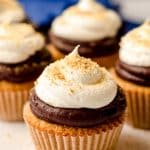 Triple threat is RIGHT! Girllllllll you’ve done it again. Loving the BUTTERDREAM — let’s just go ahead and start calling it that for good, because, let’s be real, it’s EXACTLY what 99% of my dreams are make of. Holy cow, Lynn – I can’t wait to try this!!!

I’m going to work on trademarking the word so I can sell it in little cloud containers and everyone in the world will be happy all the time. Didn’t I say we needed more ‘mallow in the world? We’re getting closer and closer!!

I second Leah – BUTTERDREAM! I need to find marshmallow fluff stat! It may be the middle of winter, but this girl is craving s’mores, and smore’s cupcakes, well they are the perfect winter solution! Thanks Lynn!

Amy, when you come visit, we can totally eat some marshmallow fluff right out of the jar. In fact, while you’re here, I think you should sample one of everything in my baking cabinet that you can’t get in Australia!!

That sounds like a plan! A delicious, delicious plan! We better tee up a Spin class too so I can still fit into my jeans!

I agree, fresh fruits and veggies and s’mores are what I think of when it comes to summer! I love that you used graham crackers and whole wheat flour in these cupcakes, and that marshmallow frosting looks delish!

I just made these to bring to a 4th of July cookout and while I haven’t been able to try them yet, licking the bowls was amazing! Can’t wait to try them later on. I topped with more of the powdered grahams like you suggested, and half a chocolate square 🙂 (picture here http://imgur.com/JIzwnPo). Thanks for the recipe!

They look great, Sarah! Thanks so much for sharing!

A few questions. Recipe says two eggs but directions say to add the egg (singular). Just wanted to make sure how many eggs and not mess it up! Hehe. Also, do you know if this frosting is one you can torch a bit to give it that smokey look? Thanks so much! Looking forward to making these!!

So my butterdream didn’t come out that yummy…what did I do wrong??? 🙁

Hi Eliset– sorry I just now saw your comment from earlier. Yes, 2 eggs! And I have no idea why your buttercream didn’t work, since I wasn’t there with you. Did you leave any ingredients out?

double checked my ingredients I didn’t leave anything out it taste like old refrigerated butter which my butter wasn’t opened. I’m a little bummed:(

I don’t know what to tell you! I’m just sorry it didn’t turn out!

You have no idea how much I’m connecting with this post right now! Ever since I made 7-minute frosting I’ve been obsessing over making a S’mores cupcake but I couldn’t solve the graham cracker problem. This is such a smart (and tasty) solution!

Haha, so glad I could help out the cause, Meg! It worked nicely!

Cupcakes and buttercream tasted good overall, but even after I completed the measurements exactly, it did not rise as it looked like it did in the pictures and recipe.

Oh. My. Word! I happened upon this recipe during quarantine and I couldn’t wait to make it. I followed it to the letter and these are AMAZING! I’ve made it 3 times and they come out perfect each time. You are the first food blogger that I’ve decided to follow. Looking forward to try more of your recipes!

Thanks so much, Cynthia! I appreciate the follow– don’t be a stranger!

We had fun making these and attempting to add our own little flair! We used homemade graham crackers and added peanut butter into the frosting (still need to work out the kinks a bit) but they were a big hit and definitely ones we will make again!

Thanks for catching that typo, Jacki! It should have said 1/2 cup, 60g.

Love these! Came back looking for the recipe and thought I lost it because there were no chocolate bar pieces inside the cupcake, but alas, it’s just been updated. I love the chocolate inside! 🙂 These have always gone over great! Glad you mentioned the past version so I knew I was in the right place ❤️

Just made these and they are heavenly!! Thank you for sharing 🤤

Thank you so much, Emily!

Awesome recipe! My 5yo helped, and we had a great time following all of the steps. We made it gluten-free by subbing the flour and graham crackers with Pamela’s. Very tasty!

Thanks so much, Cece! Way to help, ARo 🙂