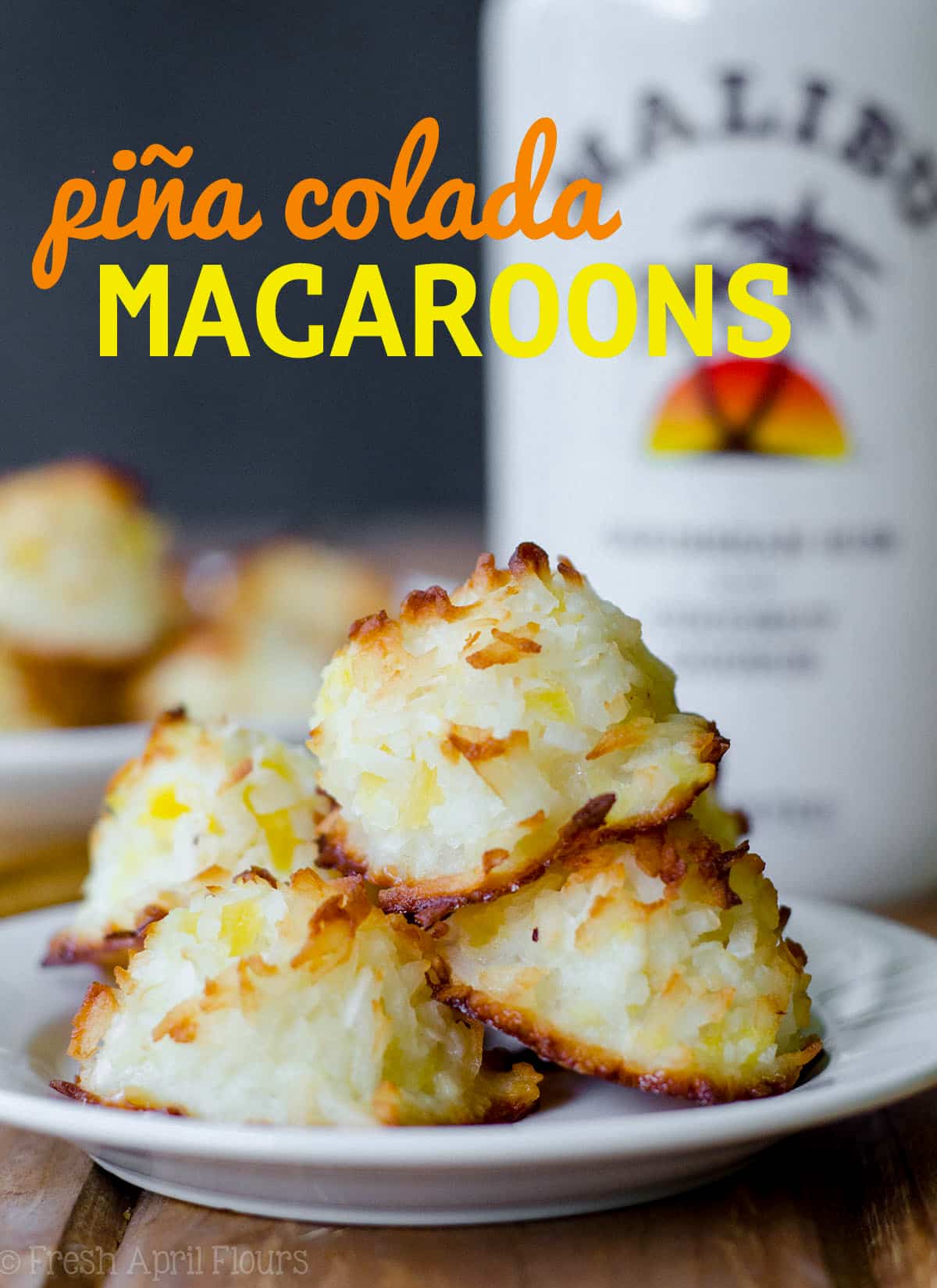 Easy coconut macaroons filled with crushed pineapple and spiked with a touch of coconut rum. 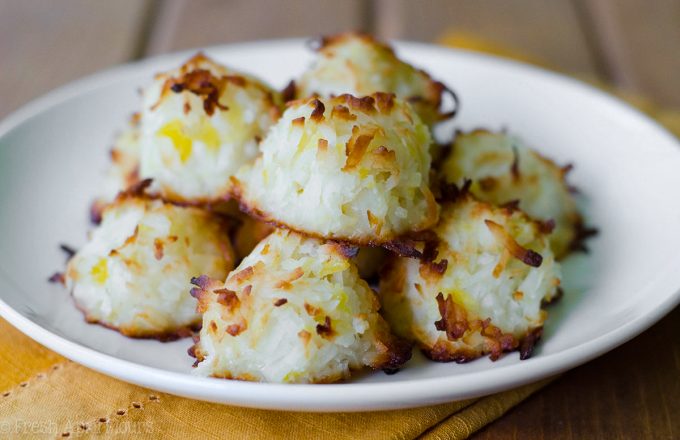 Well, I don’t really know about your neck of the woods, but ours, we got our first legitimate snow this past weekend. Probably only about 2-3 inches, but it was enough to mess up afternoon plans and left mostly just wet roads by the evening, but it came and went and left its pretty mark on the grass and trees around the area.

So, perfectly timed, today’s edition 12 Days of Christmas Cookies has summer sun written all over it in more ways than one. But do not think that you can’t enjoy this cookie all year round, because you would surely be mistaken. Who doesn’t love a good piña colada any time of the year?

I mean, I guess if you don’t love piña coladas, you’d be in that group, but say you do like them… Would you turn one down mid-winter? No, you wouldn’t. Cheers! 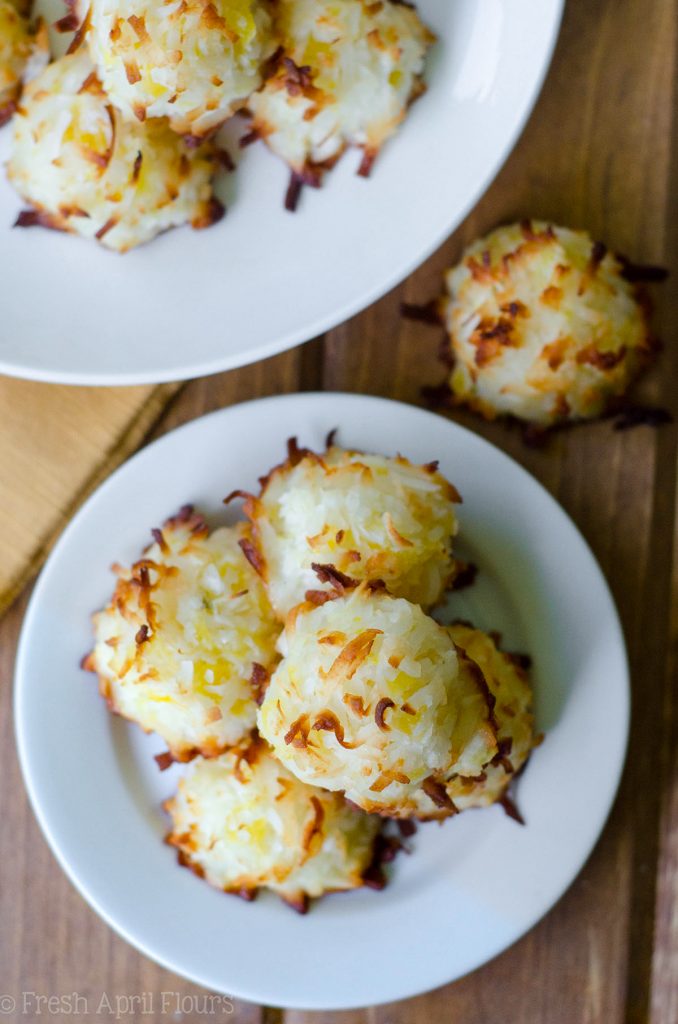 This cookie actually comes to you from August. Yes. August. I took it with me to a girls’ beach weekend (just like I did to the same beach with this piña colada creation!) and it was the perfect treat between spiked seltzers and Coronas.

I know because that was the last weekend I could drink, and I found out I was pregnant about 10 days later. Long live piña colada macaroons, my friends.

They are easy to whip up and even easier to eat, and with a little touch of actual coconut rum? Forget it. These bad boys will disappear in no time. You’ve been warned.

Have you made coconut macaroons before? My first time was 2 years ago when I made carrot cake coconut macaroons and my life has never been the same. First of all, they were 10x easier to make than I thought they were, and I called them one of the best things to ever come out of my kitchen.

I mean… Bold but true statement. Those cookies are bangin‘.

So I took some cues from those tasty little numbers and changed up a few things. There is one very key step in these piña colada macaroons that is imperative to their success– you’ve got to drain that crushed pineapple really well.

I let mine sit in a mesh sieve for awhile and then pressed out the remaining liquid with a cloth kitchen towel.

The pineapple will still be moist, but it won’t be dripping. You want some liquid with your macaroons but not too much or they’ll fall apart. 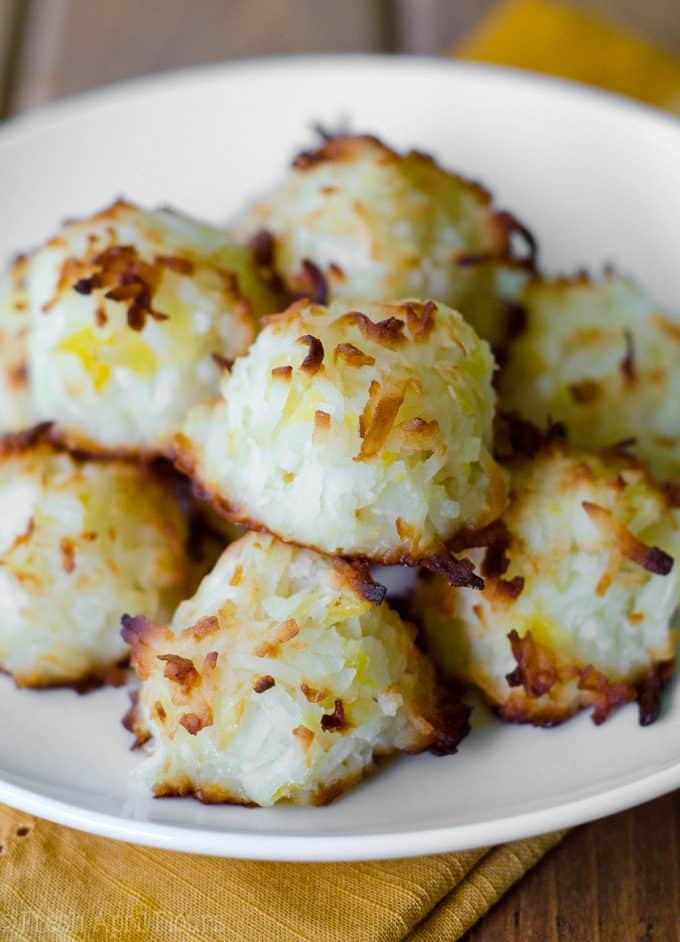 This cookie “dough” doesn’t need to chill and you don’t need to roll it into balls. It’s very straightforward and all you need to do is scoop it onto the baking sheet and you’re good to go.

The sugary pineapple juice will seep out a little bit and caramelize on the sides of each mound, but this is totally encouraged and what you want to happen. Those parts are the best bites about these macaroons!

While there certainly is nothing overpowering about the rum in these cookies, it’s there and it’s subtle and it just brings the whole thing together. If you’re not into rum, you’re welcome to leave it out.

Just use some water and you’ll get the rest of the effect with plenty of pineapple and coconut to go around.

But if you’re looking for the real deal? Booze it up.

A summer time cookie perfect for any season, this piña colada macaroon would make a wonderful addition to your cookie trays this season, especially next to chocolate ones, some biscotti, and even some of those classics.

A little something something to keep cookie life interesting. 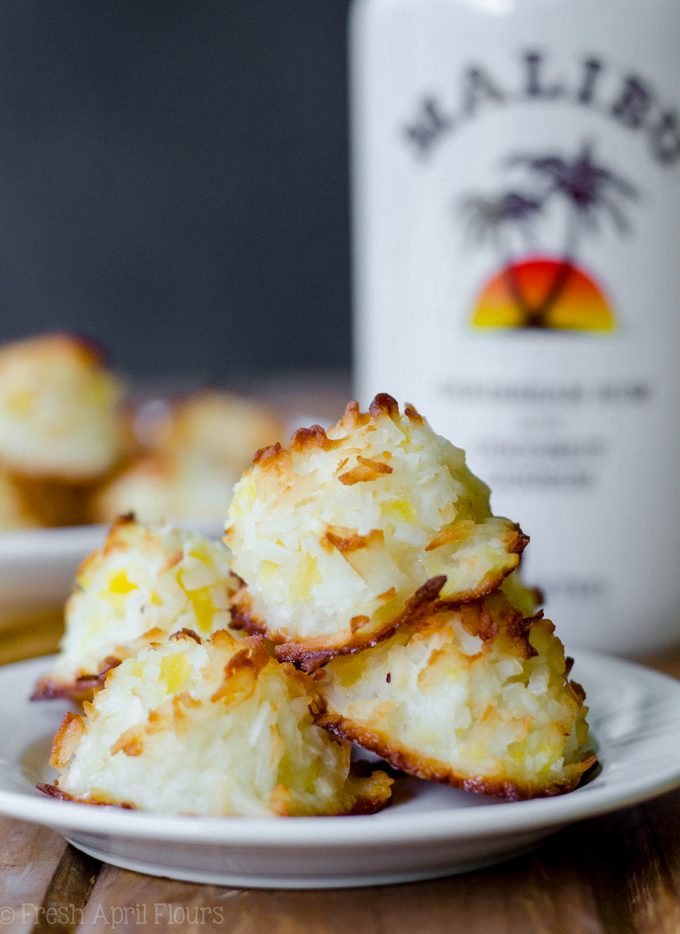 Plus who agrees that boozy desserts reign supreme sometimes? I’ll raise both hands to that one! 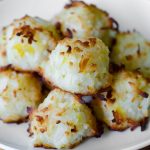 *Crushed pineapple: drain this very well. I let mine sit in a mesh sieve for awhile and then pressed out the remaining liquid with a cloth kitchen towel.
Did you make this recipe?Mention @freshaprilflours on Instagram or tag #freshaprilflours!
Pin
Share
Email
Share
Tweet

this may be a silly question but I am hoping you will clarify if one should measure the ingredient quantities by volume or by weight? I ask because 3 cups of coconut flakes by volume is a substantive amount less than 24 oz. The same issue with crushed pineapple. by volume it is more than 6 oz. Thank you!

Hey, Marna– I just updated the recipe to reflect weight measurements. The 3 cups of coconut is going to be about 12oz and the pineapple, just about 6oz. Hope this helps!

Thank you! This is helpful!