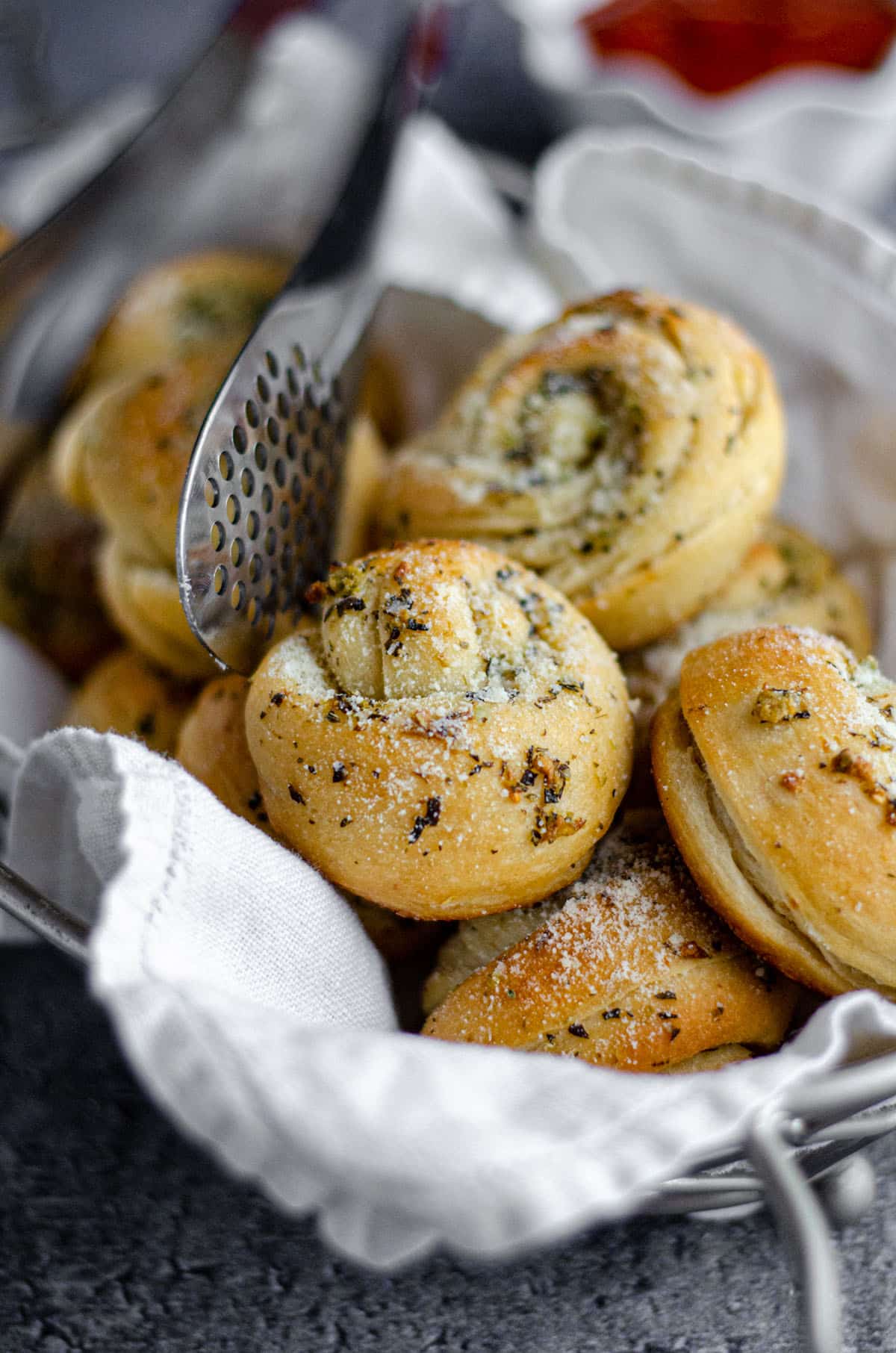 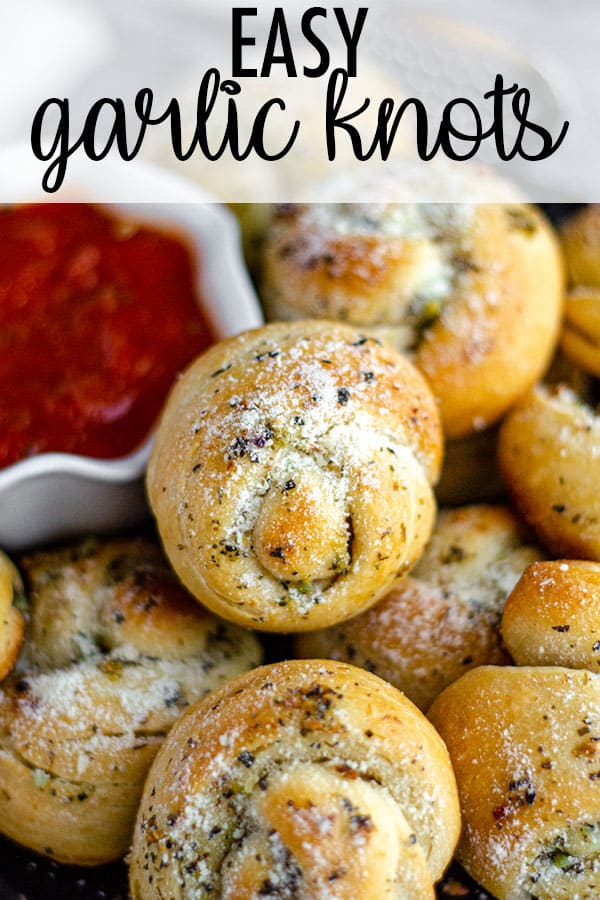 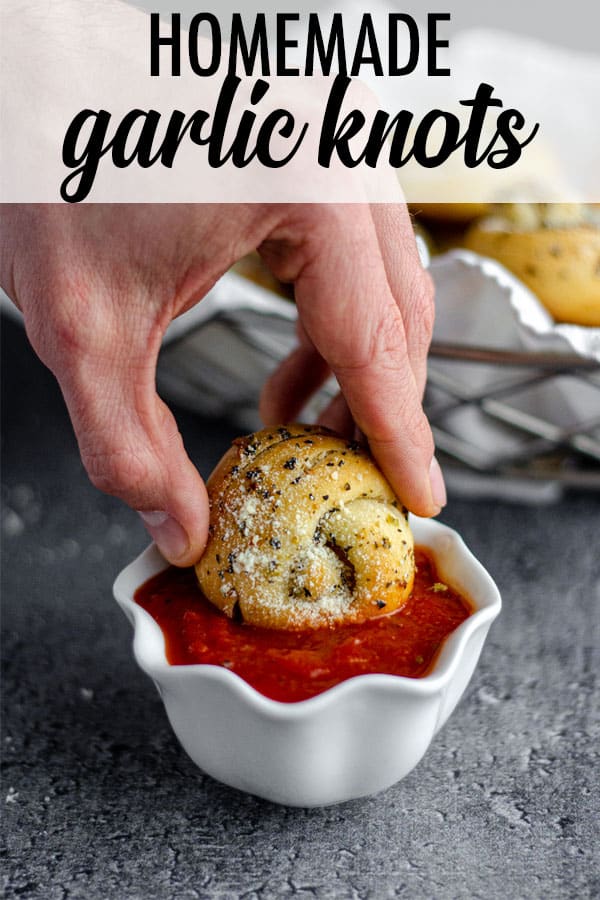 Easy garlic knots made from store bought pizza dough. Crunchy and flavorful on the outside, soft and fluffy on the inside, and ready in less than 30 minutes.

And, lucky for you, unlike many of my other bread recipes, this one doesn’t use a bit of yeast and it’s so quick, you’ll be able to throw it together as a side dish for whatever dinner you have planned for tonight in under 30 minutes.

Ok, I guess that first part was a lie. There is yeast in these easy homemade garlic knots, but it’s not your yeast. Someone else put it in there. Because we’re starting with store bought pizza dough.

Hollaaaa! This just got even better, didn’t it?

I’ve said so many times before that I really love making yeast breads. They’re one of my favorite things ever to make because they’re fun, and while they take a bit of time, the end result is always worth it.

And there’s so much pride in making bread from scratch!

But today, we’re keeping things mega quick. Because when I discovered that soft and fluffy homemade garlic knots could be a thing I could make as a side at dinner or our next holiday hosting, I said “forget you, yeast. Bring on the pizza dough!”

HOW TO MAKE GARLIC KNOTS

Like I mentioned, we’re using store bough pizza dough. You’ll need one pound of it. I used the kind in the tube, but you can also use one that’s already rolled out. You’ll just need to work a little bit harder to get it into equal parts.

Once the dough is out of the tube, you’ll cut it into 12 equal parts. So you’ll have 12 discs of pizza dough, all roughly the same size.

Next, roll each disc of dough into a log, about 6 to 8 inches in length. You’ll want to allow the logs to rest while you prepare the garlic butter.

In order to get these cutie little garlic knots all garlic-ed up, you’re going to melt butter in a small saucepan with minced garlic. Yes, you’ll have little bits of garlic in your butter, but believe me, you’ll want this.

After it’s all melted, stir in some oregano and dried basil and let it cool down a bit while you form the bread knots.

You might be wondering about exactly how to tie garlic knots at this point, because it sounds difficult, but it’s really not.

Grab the two ends of each log and “tie” a knot. You won’t truly get to put the bread into a tie because, well, it’s dough and it’s sticky and stretchy, but you’ll be able to form an overlap of dough.

One end will poke out of the top of the knot, and you can tuck the other one under the whole knot. You can also leave the bottom end sticking out if you prefer, but your knots won’t be perfectly round. Whatever floats your boat works just fine!

BRUSH THE KNOTS WITH GARLIC BUTTER

Using a pastry brush, brush your seasoned garlic butter onto the raw dough. Don’t be afraid to get some garlic chunks in there!

You only need to bake the knots for about 15 minutes, 18 minutes if you want them nice and golden brown. When they come out of the oven, give them one last brush of garlic butter before dusting grated Parmesan over all of the knots.

Dip in marinara sauce as a snack, use as a side with soup, or slice in half horizontally and make mini garlic sliders with your favorite fillers.

I wish I could say these lasted long in our house, but they didn’t. All 12 were gone in a couple days, though I did give 4 away to my brother-in-law who would eat garlic knots until his eyes fell out if he could.

I worried about these garlic knots drying out after sitting at room temperature for a couple days, but keeping them covered tightly and reheating them for 10-12 seconds in the microwave brought them back to life and they were still perfectly soft and fluffy, just like they were right after they came out of the oven.

I’m totally breaking this recipe out at Easter, again at birthday parties, Thanksgiving, and Christmas. It’s just too easy and too perfect not to.

So there’s your fair warning, anyone who comes to our house for holidays. Garlic knots on the menu, no matter what!

Seriously, who knew making garlic knots from pizza dough could be so easy or so tasty? I certainly didn’t, but now I do, and I’ll probably never make garlic knots from scratch even if I had all the time in the world.

So… Who’s having garlic knots tonight? 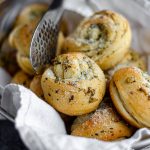 Easy garlic knots made from store bought pizza dough. Crunchy and flavorful on the outside, soft and fluffy on the inside, and ready in less than 30 minutes.
Prep Time10 mins
Cook Time18 mins
Prevent your screen from going dark
Recipe Author Lynn April
Servings: 12 garlic knots