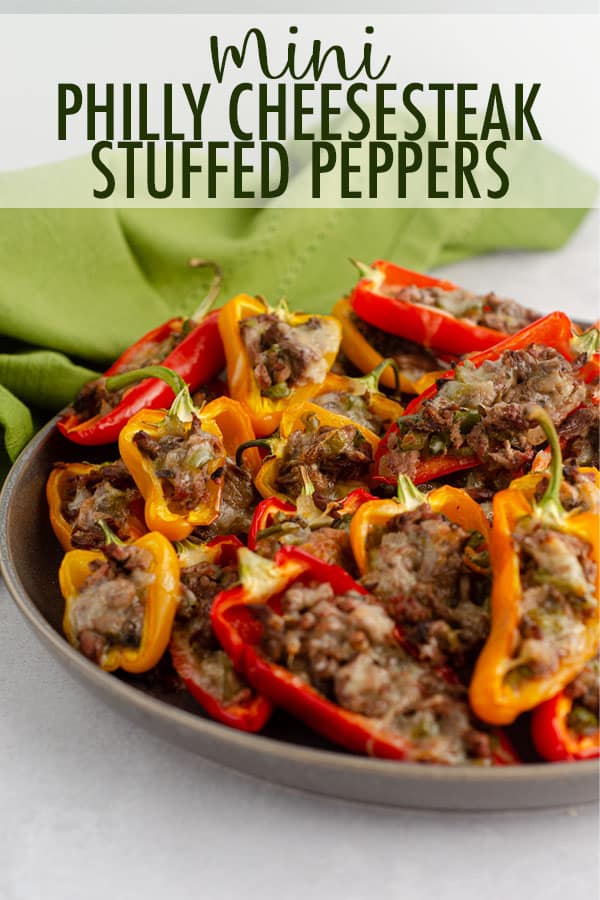 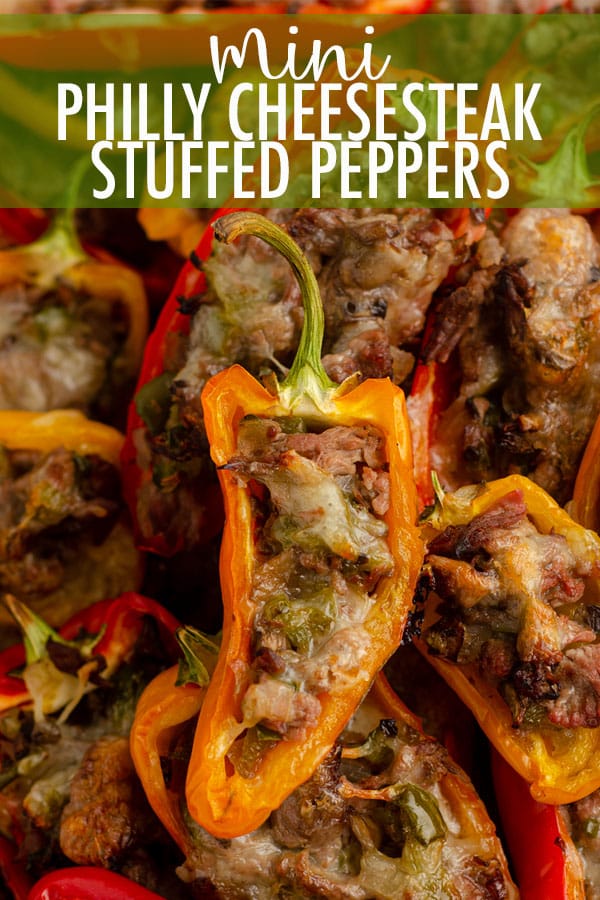 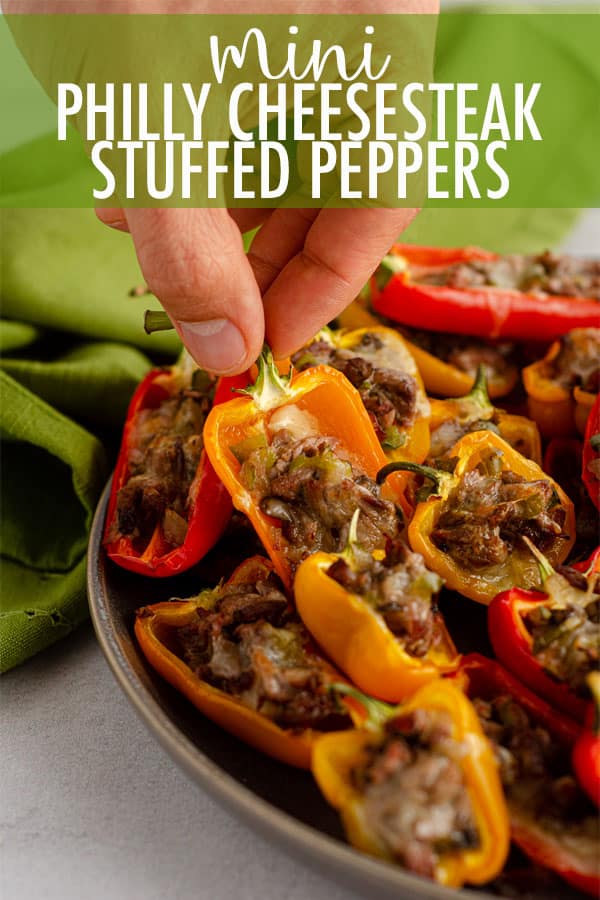 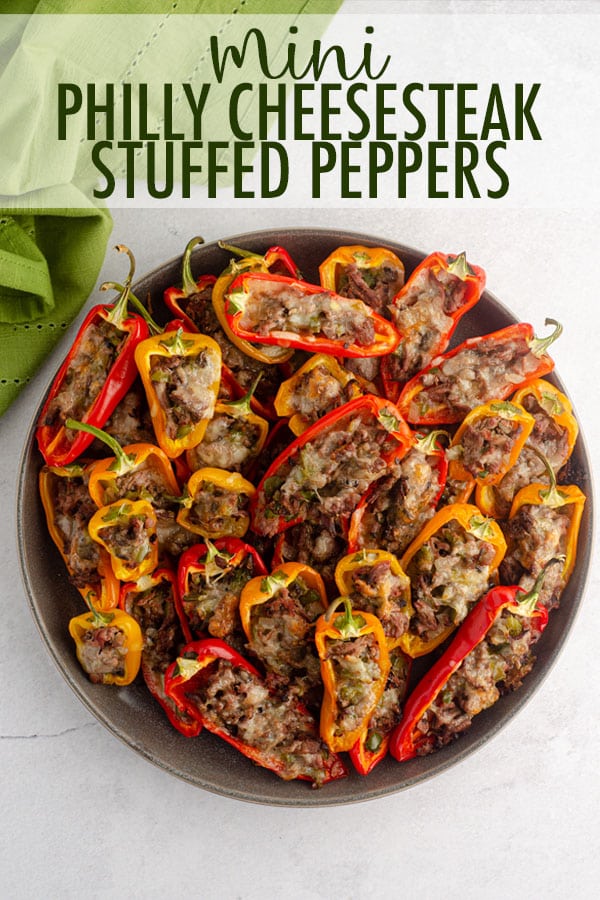 In August 2020, this post, the photos, and the recipe were updated to reflect clearer and additional instructions.

Before I say anything at all, you need a Philly cheesesteak lesson. Did you know you needed to know anything special?

If you’re a local, a frequent visitor, or have even visited Philly a handful of times, you’re probably familiar with what I’m about to teach you. If you’re wondering what the HECKKKK is going on here, listen (read?) up.

First of all, if you ask a regular Philly cheesesteak connoisseur where you can get the best cheesesteak, you will likely hear one of two or three places.

There are plenty of places to get one in Philly, but locals and regular have their favorites, and the competition and following get pretty serious.

To save myself, I won’t pick a side. I will say… We’ve tried a few, and we have our favorite.

There is actually a right and wrong way to order a cheesesteak in Philly. Of course, you’ve got your standard roll with steak, but then there are several add-ins you can choose from.

First of all, a cheesesteak is not a cheesesteak without cheese (umm, duh), but some people (the crazy ones??) choose not to get cheese.

Fine. Let those people be crazy.

For the rest of us, the “classic” cheese is Cheez Whiz (not kidding), but you can also choose to have your cheesesteak with American or provolone cheese. Pick the cheese you like, we will come back to this part.

Next up: fried onions. Do you want ’em or not? Easy to distinguish without even saying the word “onion.”

If you want onions, you’ll order your cheesesteak “with,” and if you don’t want them, it’s “without.” It’s as simple as that.

So, we come to the final product. The standard verbiage for ordering is this formula: [number of cheesesteaks] + [type of cheese] + [with/without].

For the April family, the order would be “one Whiz without” and “one provolone with.” Then we split, and everyone is happy!

Are you still with me?

Ok, now let’s get to the whole point of today’s recipe!

My friend Leah posted these amazinggggg and adorable little Chorizo and Quinoa Stuffed Mini Peppers many years ago, and after she posted it, I was dying to create something like them and also try cooking something I’d never cooked before!

I decided to do a little twist on Leah’s recipe as a nod to the City of Brotherly Love, a city we enjoy visiting for sporting events and special dinners and whose skyline graces our road trips often.

Aaaaand whose airport we fly out of, like, every time we fly. As residents of a “suburb of Philadelphia,” we have had our fair share of authentic cheesesteaks.

Now… If you peek at my recipe, you’ll see I don’t use Cheez Whiz.

There are a couple reasons:

1) it’s super gooey and I wasn’t sure how it would fare on these peppers and
2) I didn’t want a jar of Cheez Whiz leftover in the fridge.

Cheez Whiz is not something I can just throw into a recipe to use it up. I settled on provolone.

You’ll also see I added some green bell pepper and mushrooms. I didn’t mention it in my mini-lesson, but you can also get these add-ins on your cheesesteak depending on where you go. Also, they both bring a ton of flavor to these little bite size cuties.

Although these stuffed peppers take a bit of time to put together, the work itself is not hard. PLUS! You can do a lot of work ahead of time. See my notes in the recipe about this.

I also have notes in the recipe about turning this Philly cheesesteak stuffed peppers recipe into 4 large bell peppers if you’re not into prepping all the mini peppers.

You’ll start by getting your filling ready. I have made the mistake of getting the filling ready right before actually being ready to stuff my peppers, and I have burned my fingers on hot hot steak.

Make the filling first and prep the peppers while it cools.

A bit of olive oil, finely diced onion, green bell pepper, and mushrooms go in first, and then you’ll add your steak and cook for just a few more minutes to get the veggie mixture flavor all over everything.

I like to use top round sirloin (like from the deli counter) and chop it up pretty small.

I have also cooked my own London broil and then sliced it. This adds a significant amount of prep time, but it’s an option.

As you cool your filling, you’ll prep your peppers. This is the most time-consuming part of the whole process, but it’s not as awful as it sounds.

Mini peppers are so cute, and each time you find yourself annoyed by the fact that it feels like you have 847 more peppers to clean out, remind yourself how cute they are (cute food is the best food).

It takes me about 10-15 minutes to cut all 24 peppers and scrape out the seeds. The good news is, since these peppers are so small (and remember, CUTE), they don’t really have too much going on inside of them as far as seeds and white parts.

I am typically able to use my fingers to pull most of the “stuff” out.

I like to layer some cheese in the bottom of each of my peppers. I have used both provolone to sharp white cheddar. I like a sharper cheese, but you’re welcome to use whatever cheese you prefer.

Once the cheese is in, stuff the peppers with a heaping pinch of (cooled) filling. And I mean STUFF. Jam it in there. These aren’t Philly cheesesteak filled mini peppers. They’re stuffed peppers. Be generous!

You can actually stop right here and bake them later, or go ahead and keep the party rolling.

Another pinch of cheese on top, and they’re ready to bake. Only about 20-25 minutes, until the cheese is bubbly and the peppers are tender.

These little peppers are so so so good. The first time I made them, I had pretty high expectations for them for some reason, and after my first bite, those expectations were not only met but exceeded times 100.

Any time we make and bring these peppers to a gathering, they are met with rave reviews. They are usually gone before I have time to really tell people what they were!

My favorite part about these peppers is of course the dreamy melty cheese, but more than that? The crispy edges of the steak that add the slightest savory crunch to each bite.

The flavor of the peppers, onions, and mushrooms really come through, but not so much that any one flavor overpowers the others.

Each bite is the perfect marriage of steak and veggies and the cheese really seals the deal, as cheese normally does.

If you’re looking for something to wow party guests or just something different to serve or bring with you to a cookout, these little peppers are it. You’ll be surprised how easy they are and how much flavor is packed into such a tiny little package. 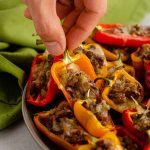